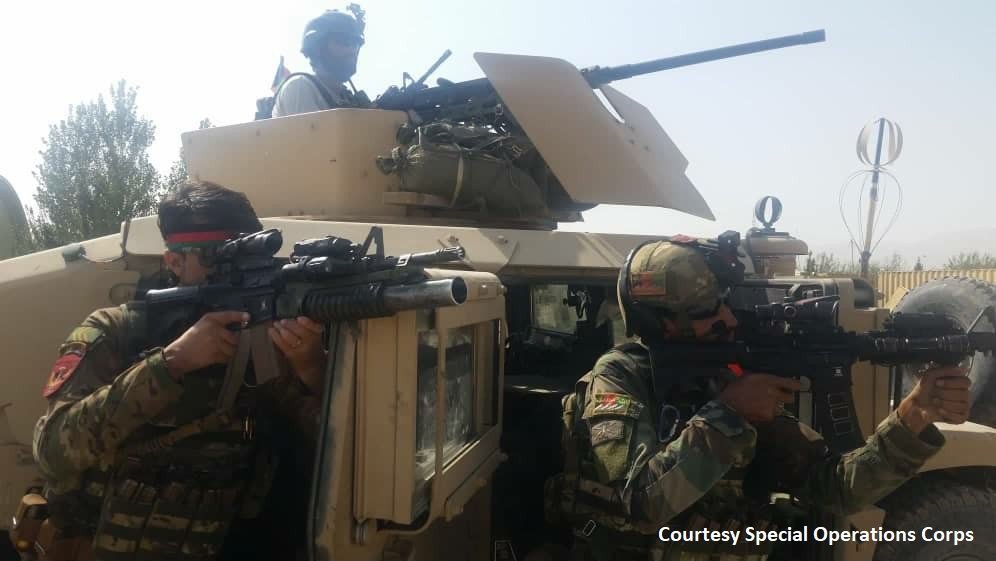 Afghanistan Army killed 1,985 Pakistan Backed Taliban Terrorists, (including many ISIS Terrorists) and wounded 481 Terrorists, as a result of continuous clearance operations in last 19 days. Huge quantity of Arms and Ammunition, Drugs were seized, and vehicles used by Taliban were destroyed. These figures are provided by Ministry of Defense, Afghanistan during different press releases over the past 19 days.

Ministry of Defense, Afghanistan via a Press release on a daily basis provides an update on the operations carried out in 24 hours in different provinces. They also provide the figures of how many Taliban or Pakistani Terrorists, the Afghanistan Security Forces killed in 24 hours.

As per the Press Releases by Ministry of Defense, Afghanistan on their official website, over past 19 days (13-September 2019 to 1-October 2019), Afghan National Defense and Security Forces, launched 395 joint offensive & clearance operations, and conducted over 1500 Commandos, Special Forces operations in different parts of the country, in order to remove security threats, destroying the enemy’s sanctuaries and ensure better security to the people of Afghanistan, Afghan Air Forces carried out 475 airstrikes on enemies’ positions in support of these operations.

Data Released by Ministry of Defense, Afghanistan from 13-September 2019 to 1-October 2019 of operations against Pakistan sponsored Taliban Terrorists

During the operations huge quantity of Arms and ammunition were seized. Many different types of IEDs were recovered and defused. Many vehicles belonging to Taliban Terrorists were destroyed.

Some of the Major Operations conducted by Afghanistan Army

On 16-September 2019, Mullah Noor Uddin Taliban shadow governor for Samangan province along with five of his colleagues were killed and 1 vehicle was destroyed in airstrike in Dara-I-Suf district.

On 20-September 2019, In Helmand province, 9 Pakistan backed Taliban Terrorists were killed, 27 fighting positions and 17 rounds of IED were destroyed in airstrikes & clearing operation in Grishk, Nad Ali and Washir districts.

On 21-September 2019, in Farah Province, 5 Pakistan backed Taliban Terrorists including Haji Mullah, a Taliban local commander were killed in airstrike in Bakwa district. In Nangarhar province, 3 ISIS Pakistan backed Taliban Terrorists were killed in airstrike in Khogyani district. In the continuation of “Mobeen operation” in Ghazni province, Commando Forces and Police Special Forces arrested the, 9 Taliban terrorists including 3 facilitator of suicide attack that one of them who involved in planning of deadly suicide bombing near a hospital in Zabul province.

In this operation, 3 other explosives planner who brought the 2 vehicles kind of Mazda for suicide attacks in Ghazni province were also detained.

The “Mobeen operation” are continuing in Ghazni province, National Defense and Security Forces inflicted heavy causalities to the Taliban terrorists and cleared many areas from presence of them.

On 23-September 2019, As a result of ANDSF operations in Musa Qala district of Helmand province, 22 foreign members of Taliban were killed and 14 arrested.

The arrested terrorists include five Pakistani nationals and one Bangladeshi. The foreign terrorist group was actively engaged in organizing terrorist attacks. During the operation, a large warehouse of the terrorists’ supplies and equipment was also demolished.

Afghan National Defense and Security Forces are committed to safeguarding the lives of the people of Afghanistan and will take every measure to protect the people.

On 24-September 2019, in Paktia province, 16 Pakistan backed Taliban Terrorists were killed, 2 vehicles packed with explosives, 4 motorbikes and amount of weapons & ammunition were destroyed in airstrikes in Ahmad Abad district and province capital.

Securing and maintaining public order is one of the key tasks of the Afghan National Defense and Security Forces, ANDSF considering themselves responsible for Security and protecting public order in any national process.

Ministry of Defense, Afghanistan released a press release on 1-October 2019 and mentioned that the reports Regarding The Collapse Of Baharak And Khwaja Ghar Districts Are Incorrect.

Clashes are continuing between the Afghan National Defense & Security Forces and Taliban terrorists in Baharak and Khwaja Ghar districts of Takhar province.

Defense & Security Forces stepped up their operations and have so far been able they inflicted heavy casualties on terrorists, in the most recent case, in an airstrike, 11 terrorists were killed in Baharak districts on last night.

At the moment, Security & Defense Forces are moving forward and these districts will be clearing from terrorist presences as soon.

Regrettably, the Taliban terrorists using civilians and people’s houses as a shield and they fighting against the people and government.

On September 28, 2019, several people headed to cast their vote despite the direct threats to the civilians from the Taliban Terrorists. However, the turnout was a historical low, where only around 2.1 million showed up from the 9.7 million registered voters. Despite low turnout, voting during election day was held in a “relative calm” situation, with only 3 deaths and 37 injuries occurring due to “small-scale” Taliban attacks. In spite of the low voter turnout, violence was only “sporadic.”

The election commission also resort to biometric voter verification machines for the first time, which took the fingerprints and picture of every voter and recorded the time they cast their ballot. The technical system was opted to combat the growing fraudulent instances during elections in Afghanistan.

The President of Afghanistan is elected using the two-round system; if no candidate receives a majority of the vote in the first round, a second round will be held featuring the top two candidates.

The Taliban carried out attacks to disrupt the campaign. On September 17, 2019, a suicide bomber attacked the campaign rally of President Ashraf Ghani, killing 26 people and wounding 42. Less than an hour later, the Taliban carried out another suicide bomb attack near the US Embassy and the Afghan Defense Ministry, killing 22 people and wounded around 38.

On 25-September 2019, a magnetic bomb exploded in Ghani’s campaign office in Lashkargah, Helmand province in afternoon wounding 3, including a Parliament member from Helmand, who had already lost both feet in a Taliban attack 3 years ago.

Hekmatyar had claimed he was allowed to vote without a registration sticker. Afghanistan Election Commission rejected Hekmatyar’s claim. Said he was registered where he voted. Provided his registration number in a live press conference.

In an interview, General Khoshal Sadat, Deputy Minister of Interior, responded to Hekmatyar’s comments on post election chaos. “We know how to deal with chaos.”

It is a big blow on the face of Pakistan sponsored Taliban Terrorists and insurgents who chopped the fingers of voters during the previous elections. Those voters again voted with another finger. Safiullah Safi got his finger chopped by the Taliban for voting in 2014. He didn’t care about getting his other fingered chopped and voted.

In a major success of the democratic process in Afghanistan, even the Chief Justice of Afghanistan was also seen waiting in line to cast his vote.

Many pictures circulated on Social media with Afghan voters showing Middle finger to the Taliban Terrorists along with all their Pakistani sympathizers.

Deputy election commissioner Ismatullah Mal was seen checking for his name on a voter list. This is the first time voter lists have been posted outside polling stations.

There were tight security arrangements on all the Polling stations. All equipment had to be sniffed by a trained dog for explosives before being allowed in polling centers.

Hamdullah Mohib, National Security Adviser (NSA) of the Islamic Republic of Afghanistan in his speech talked about recently concluded Afghan Elections. Some of the excerpts from his speech are: He said, “Today, I am even more proud because just two days ago, around 3 million Afghans faced the threat of terrorism and risked their lives to vote in our young democracy’s 4th presidential election. Those who voted included men and women; the very old, some voting for perhaps the last time in their lives, and the very young, those voting for the very first of many times; those living with a disability, for whom the journey was longer and more tiresome; some who came out despite having their fingers cut off by Taliban during previous votes. We all voted not just for a president, but we also voted for democracy.
We voted for our Constitution.
We voted for freedom and sovereignty.
We voted for prosperity and connectivity.
We voted for peace.
We voted for the Islamic Republic of Afghanistan.

He further said, “A New Afghanistan based on Islamic values, Afghan traditions, and hope for a permanent escape from our bloody past. You invested heavily and dearly in our vision for an Afghan democracy—even with the lives of your own countrymen and women—from the time when it was only an idea, to today, when you can witness those investments turned into policies, actions, institutions, principles, and people. We, the young Afghan leaders of today, have embraced democratic values and principles, the same ones on which the United Nations itself was founded.”

He also gave a warning to Taliban and Foreign Sponsors (Without naming Pakistan), “To the Taliban and their foreign sponsors, HEAR THIS NOW, a message from the Afghan people: Join us in peace, or we will continue to fight. And, as my colleague Ambassador Adela Raz said last week here at the United Nations: “This is a fight we can can win.”

“Terrorism is an idea, as much as it is a form of violence. We must continue to work together to extinguish the ideologies behind terrorism, wherever they may exist. The zero-tolerance approach that has been called for repeatedly must no longer be a talking point, and instead become an action
point. We need more institutional cooperation. We need more decisive action within the region. A strengthened collective security approach must take into account the wide nexus of transnational criminal activities as a whole, inching the the flow of terrorist fighters, their recruitment and resources that allow them to remain lethal.”