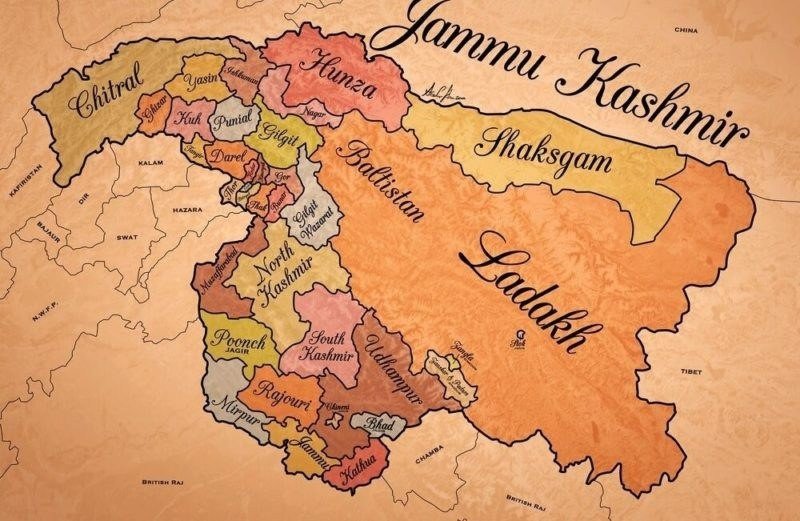 Pakistan Occupied Gilgit Baltistan is the Paradise turned into hell by Pakistan after it has forcefully occupied.

Gilgit-Baltistan is part of Union territory of Ladakh, Republic of India but is currently under illegal occupation of Pakistan since 28th April 1949.

The region is rich in minerals but locals live a miserable live under occupation Pakistan army. Occupation of Gilgit Baltistan and Chitral region has acted as a curse and converted a rich diversified and historical land in.

The region is historically part of India, East India company took control of the region from Sikh rulers and sold the region of Kashmir to Raja Gulab Singh of Jammu on 16th march 1846. The treaty of Amritsar gave control of all the hilly or mountainous country with its dependencies situated to the eastward of the River Indus and the westward of the River Ravi. This legitimized the Dogra conquest of Baltistan(1840) and Ladakh(1842). After a lull, the Dogra Armies along with the British marched further north, taking Gilgit area containing multiple minor principalities, Chitral(then a subsidiary of Khotan), Hunza and Nagar by 1890.

The Legitimate ruler of princely state of Jammu and Kashmir signed and accepted the accession with India which Pakistan refused to accept to this day. Pakistan attacked and captured part of Jammu & Kashmir region including Chitral Gilgit Baltistan and Kashmir. India approached United Nation against this illegal attack and united nations also validated the accession to india and asked Pakistan to immediately withdraw all military personals from the area it has illegally occupied.

Since there was no legal basis for Pakistan to continue its occupation Pakistan faked two agreements to fool population of occupied area and its population also who were questioning the legality of continued occupation of Kashmir by Pakistan.

Once Pakistan griped its control over occupied area the reign of terror was unleashed on occupied civilians of Chitral Gilgit Baltistan and kashmir.

Anyone who opposed the loot was shot dead.

Civilians of Pakistan occupied kashmir, Gilgit Baltistan and Chitral have raised the flag of revolt and are demanding freedom from Pakistan against land grabbing and kidnapping of civilians, and re-union with India.

Pakistan army run’s brothels in its safe houses and some of the pimps used by them have exposed this horrible reality from time to time.

Condition of kidnapped Kashmir women is unimaginable in any civilized world.

Global focus is now shifting towards the barbaric and inhumane treatment of enslaved civilian who are demanding reunion with India on urgent basis.

More recently the people of occupied GilgitBaltistan ran a twitter hashtag campaign #GBrejectsKhiAgreement on 28th April to express their rejection of illegal annexation of Gilgit Baltistan with Pakistan.

Another important aspect to the situation in Gilgit-Baltistan is the fact that Gilgit Baltistan is Shia while Pakistan is Sunni. When a Kashmiri strongman Farooq Abdullah who regularly influenced Kashmir policy said, “PoK is in Pakistan and will remain, J&K is in India and will remain. We need to understand this” he was countered by a Minister who said, Abdullah doesn’t want PoK because it’s predominantly Shia.

The same attitude is seen with Pakistani establishment which flouted all rules to tilt the demographic balance by assigning estates illegally to Sunnis of Pakistan.

It is important to note that the people of Gilgit-Baltistan didn’t even have voting rights till 1999 when a sort of puppet government is established for the province. The real power is still concentrated with Islamabad and it’s Ministry of Kashmir Affairs and Gilgit-Baltistan which is currently headed by an ethnic Pashtun Ali Amin Gandapur.

Quoting Wikipedia,
“From then until 1990s, Gilgit-Baltistan was governed through the colonial-era Frontier Crimes Regulations, which treated tribal people as “barbaric and uncivilised,” levying collective fines and punishments. People had no right to legal representation or a right to appeal. Members of tribes had to obtain prior permission from the police to travel to any location and had to keep the police informed about their movements. There was no democratic set-up for Gilgit-Baltistan during this period. All political and judicial powers remained in the hands of the Ministry of Kashmir Affairs and Northern Areas (KANA). The people of Gilgit-Baltistan were deprived of rights enjoyed by citizens of Pakistan and Azad Kashmir.

In the late 1990s, the President of Al-Jihad Trust filed a petition in the Supreme Court of Pakistan to determine the legal status of Gilgit-Baltistan. In its judgement of 28 May 1999, the Court directed the Government of Pakistan to ensure the provision of equal rights to the people of Gilgit-Baltistan, and gave it six months to do so. Following the Supreme Court decision, the government took several steps to devolve power to the local level. However, in several policy circles, the point was raised that the Pakistani government was helpless to comply with the court verdict because of the strong political and sectarian divisions in Gilgit-Baltistan and also because of the territory’s historical connection with the still disputed Kashmir region and this prevented the determination of Gilgit-Baltistan’s real status.”

Read our previous article: Jammu And Kashmir Includes Chitral And Parts Of Kohistan