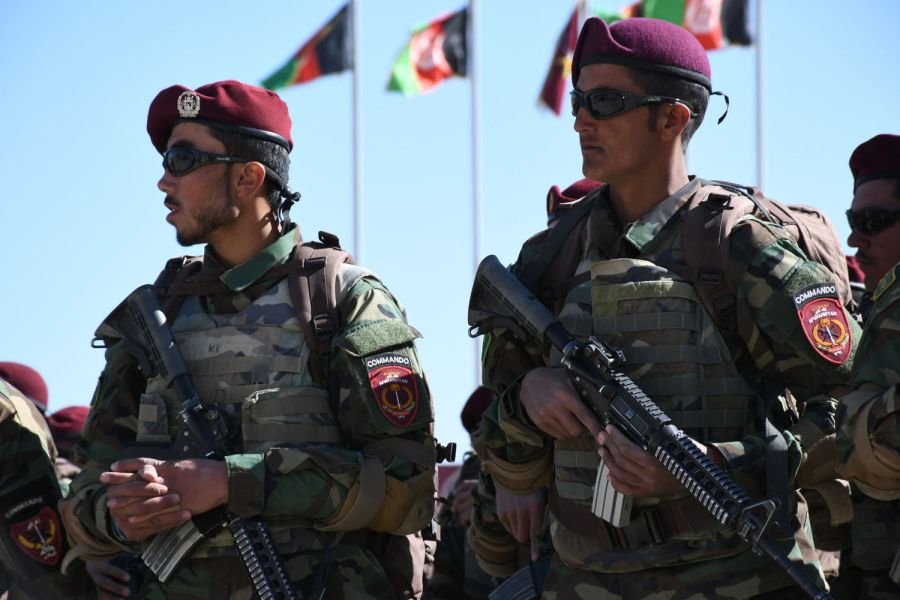 Afghanistan Army killed 1911 Pakistan sponsored Taliban Terrorists, (including many ISIS Terrorists) and wounded 550 Terrorists, as a result of continuous clearance operations in last 14 days. Huge quantity of Arms and Ammunition were seized, and vehicles used by Taliban were destroyed. These figures are provided by Ministry of Defense, Afghanistan during different press releases over the past 14 days.

Ministry of Defense, Afghanistan via a Press release on a daily basis provides an update on the operations carried out in 24 hours in different provinces. They also provide the figures of how many Taliban or Pakistani Terrorists, the Afghanistan Security Forces killed in 24 hours.

As per the Press Releases by Ministry of Defense, Afghanistan on their official website, over past 14 days (30-August 2019 to 12-September 2019), Afghan National Defense and Security Forces, launched 174 joint offensive & clearance operations, and conducted 1176 Commandos, Special Forces operations in different parts of the country, in order to remove security threats, destroying the enemy’s sanctuaries and ensure better security to the people of Afghanistan, Afghan Air Forces carried out 449 airstrikes on enemies’ positions in support of these operations.

Data Released by Ministry of Defense, Afghanistan from 30-August 2019 to 12-September 2019 of operations against Pakistan sponsored Taliban Terrorists

During the operations huge quantity of Arms and ammunition were seized. Many different types of IEDs were recovered and defused. Many vehicles belonging to Taliban Terrorists were destroyed.

One major achievement came on 3-Septembeer in Herat when 9 insurgents including Qazi Nabi, Taliban Terrorist shadow district governor was killed, 2 vehicles were destroyed and large quantity of weapons & ammunition were seized.

In another major success came on 7-September when Afghanistan Security Forces killed many Taliban Terrorists including Taliban shadow governor for Badakhshan province and 5 local commanders.

07-September 2019, Wardoj district of Badakhshan is recaptured by ANDSF

After 5 years, on 7-September 2019, As a result of recent operations, brave Afghan National Defense and Security Forces have recaptured Wardoj district of Badakhshan province.

ANDSF carried out this operation successfully without sustaining any losses.

The district was under Taliban’s control for the past four years. As a result of ANDSF’s aerial and ground operations, the district was recaptured, and Afghan National flag was raised again in this district after four years.

Taliban sustained heavy losses and many of their fighters surrendered to ANDSF.

Committed and brave Afghan forces are progressing and continuing operations in Badakhshan against the enemies of peace and stability for the people of Afghanistan.

On 11-September another district, Karan WA Munjan district of Badakhshan was recaptured from Taliban Terrorists with local people’s uprising by support of ANDSF, and now under the Government’s control.

During these operations, Taliban Terrorists suffered heavy casualties, tens of their fighters were wounded and many of them surrendered to ANDSF.

Similarly, terrorists’ bases and hideouts were cleared and demolished, The National flag of Afghanistan has once again been raised in the district of Karan WA Munjan.

Prior to this, with support from the local people, ANDSF recaptured Wurduj and Yumgan districts of Badakhshan province.

Brave and committed Afghan forces are progressing and continuing operations to clear Badakhshan of the presence and activities of terrorists.

As per the Statement Of Ministry Of Defense, after recapturing the centers of Kiraan and Minjaan districts of Badakhshan province from the Taliban, the ANDSF also took control of the lapis lazuli mines in the area from the Taliban today.

During these operations, many Taliban were killed, tens of their fighters were wounded, and many others surrendered to the Afghan forces.

ANDSF is continuing operations against the enemies of peace and stability in Badakhshan.

The defense ministry also added that the operations have so far resulted in recapturing three districts and clearing tens of villages from the presence and activities of terrorists.

Peace Talk with Taliban are Dead

After the deadly attack in Afghanistan that killed a US soldier and Taliban accepted the responsibility of the attack, President Trump called off the Peace talks with Taliban Terrorists.

President Donald Trump told reporters, “As far as I’m concerned, they are dead.”

President Trump cancelled secret plans to host a Taliban delegation in the US after the Taliban Terrorist group admitted killing a US soldier.

Taliban said the US would “lose the most” for cancelling talks.

“It was my idea, I took my own advice. I like the idea of meeting. . . . I think meeting is a great thing,” he said. “Otherwise, wars would never end.”

President Trump said “We had a meeting scheduled. It was my idea and it was my idea to terminate it. I didn’t even discuss it with anyone else.”

“I cancelled Camp David on the basis that they did something that they sure as hell shouldn’t have done,” he said, condemning the attack that killed 12 people, including the US soldier.

As per people, “Taliban wanted a ceremony or celebration and symbolism by visiting the US as a mark of their success. However, President Trump wanted to look into their eyes to see if they are serious.”

“President did the right thing. Taliban was not ready to talk peace. Taliban was boasting as if they were successful and saying they have slayed another super power.”

Pentagon spokesman Jonathan Hoffman said, “The number of troops that we will have will always be the appropriate level that we need to provide security there. We’re going to focus on the counter terrorism mission, and we’re going to focus on the reason we got into Afghanistan in the first place, and that is to prevent terrorist operations or individuals from using Afghanistan as a base from which to operate against the homeland.”

Republican Senator Lindsey Grahm speaking to Fox news said “If we left tomorrow, the Taliban cannot be trusted to take care of ISIS and Al Qaeda. They don’t have the capability. So, when you ask our intelligence community…what would happen to America if we withdrew all of our forces. They tell us without any hesitation it would lead to another 9/11 in a matter of time.”

As per Retired General Robert , senior fellow with the Hudson institute, former senior director for strategic planning at the National Security Council said, “We have to recognize that Pakistan has a national interest to influence what goes on in Afghanistan. They provide safe harbor for Taliban and ISIS. They also influence through those Proxies, terror in Afghanistan. As long as Pakistan has an interest in creating havoc in Afghanistan, the prospect of enduring peace is really not there.”

On a question, why in your opinion, Pakistan has not really stepped up in all these years and after all the money that has gone to them. Retired General replied, “Pakistan has stepped up their interference in Afghanistan, because it benefit their national interest. They are very concerned about India getting foothold in Afghanistan, on of their big enemies. Afghanistan for them is an absolute priority for their national interest.”

Pakistan Interior Minister Ijaz Ahmed Shah ADMITS that Pakistan is now working to mainstream terror groups like Jaish, Lashkar. ‘We have to give them jobs and money after deactivating them. It is our responsibility.’ Admits Pakistani terrorists were told to fight in Afghanistan.

He admits that the Terrorists fighting in Afghanistan were Pakistanis. They (Terrorists) were told to fight and they got motivated. To demotivate and bring them in the mainstream is a big task. He said the government of Pakistan has to take a decision to control all Jihadis and have the rule of law in Pakistan.

US Hitting Taliban Harder Than Ever: Trump

US President Donald Trump speaking outside the Pentagon on Wednesday morning to commemorate the 18th anniversary of the 9/11 attacks said the US is hitting the Taliban “harder than they have ever been hit before”.

Mr. Trump warned that “if for any reason they come back to our country, we will go wherever they are and use power the likes of which the United States has never used before, and I’m not even talking about nuclear power”.

“They will never have seen anything like what will happen to them,” he said. “No enemy on earth can match the overwhelming strength, skill, and might of the American armed forces.”

As soon as the news of US President Donald Trump called off the talks with Taliban, in order to show their relevance, Taliban Terrorists stepped up their attacks.

On the eve of 9/11, a rocket landed near the embassy of the US as a direct message by Taliban for the stepped up hostilities.

In an attack today 12-September 2019, as per the statement from the Ministry of Defense, Afghanistan, a suicide bomber detonated an explosives-laden vehicle close to a special Forces base in Chahar Asyab district, in the south of Kabul. Four security forces were killed, and 3 others were wounded in the attack.

Before this, as per sources the clashes also took place at the area but Ministry of Defense rejected the claims.

Same day, A blast happened near the commando forces base in Rishkhor area in PD7 of Kabul city, the Ministry of Interior spokesman Nusrat Rahimi said.

In the meanwhile Taliban Terrorists have threatened people to not to participate in the General Elections and threatened to carry out more suicide bombings and kill more civilians and children if people participate in General elections.