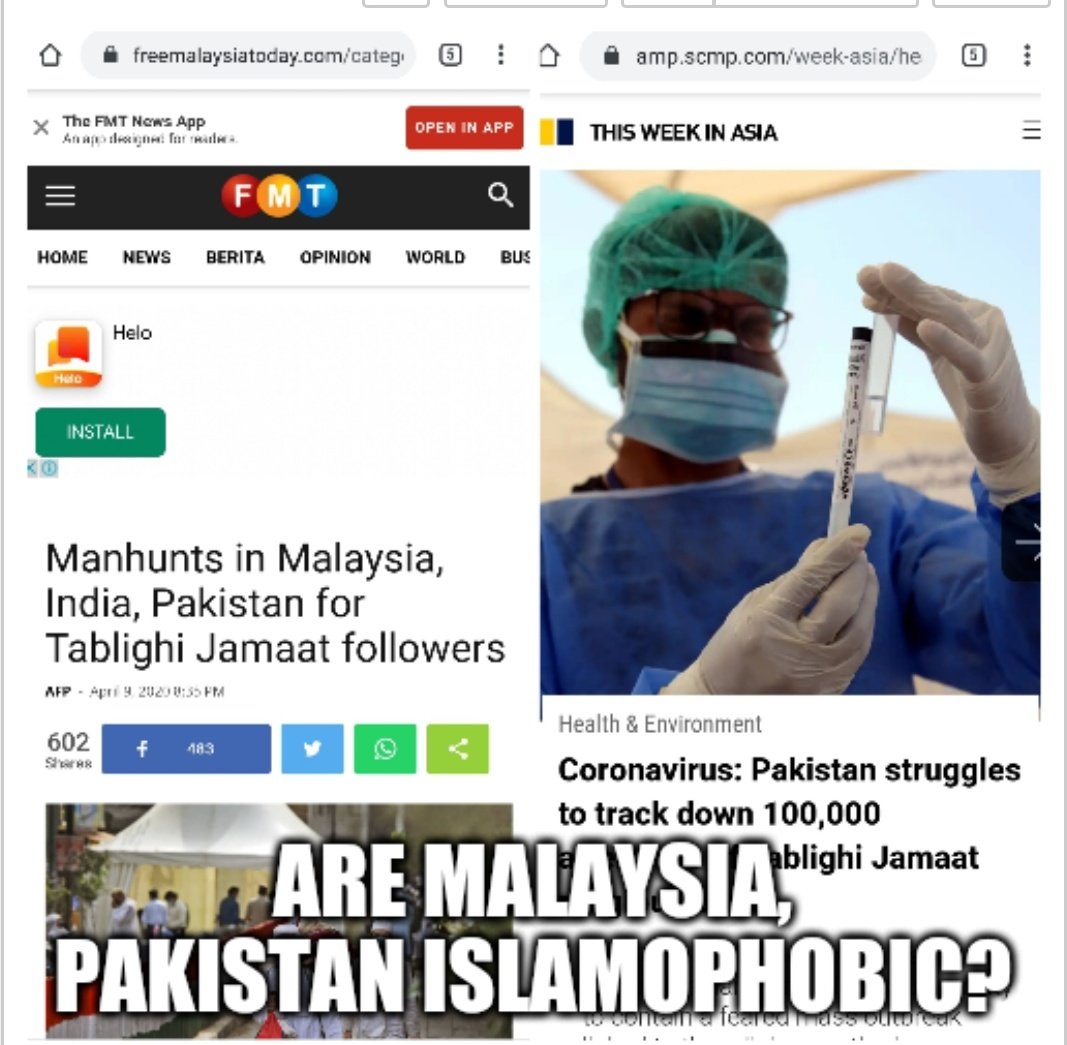 We have received “An Open Letter To All Those Shouting Islamophobia in India” from an Indian. Letter also raises some very valid questions on Kafirophobia . On the request of the Author, we are not publishing his details. We are publishing his Open Letter verbatim.

We have seen a sudden rise in the propagation of the theory that India is intolerant towards its Muslim community. Whatever the news you are getting and whatever the sources you have, the reality is completely opposite.

India has the second highest Muslim population in the world holding a Muslim population more than that of almost all the OIC nations combined. If there is really an Islamophobia as you were led to believe, you will be seeing Indian Muslims flee across the border into Pakistan or Bangladesh, the two Islamic Countries bordering India. But, it’s not so. We had Presidents, Chief Ministers, top ranking military officers as Muslims in India and we will be having them till eternity.

You need not be worried about the fate of Muslims in India. Rather, you need to look at the fate of Muslims who don’t look like you in your countries. Is discrimination against a Muslim correct, just because he is not an Arab but looks like a Pakistani or a Nigerian? Rather than focusing on fake outrages like India where Muslims are happy, focus on Muslims who are really suffering – like the Islamic Brotherhood of Egypt which was toppled in a coup, the Uyghur who will become extinct in no time or the Baloch who are being forced through untold miseries in Pakistan. Rather than focusing on countries which are suffering, why are you putting your attention on one of the most responsible countries in the world? It’s not Islamophobia because China is a bigger Islamophobic than India. It’s not targeting minorities because Baloch are minorities. There are only two other things I can think of – Kafirophobia. Are you showing your hatred towards India because it refused to convert to Islam? Or is it Pakistan which wants to target India for whatever reason?
It is sad to note that a handful of fake handles created by Pakistan and reporting of random messages by Hindus was more than enough a reason to trap the Arab states.

Now, coming to the actual persecution projected in India. What are the main themes of the day? Kashmir, Rohingya, lynching, CAA and Tabligh. Let me talk about each one of them.

Kashmir: Do you deny that a Pakistan sponsored mass exodus of Hindus happened in 1989 in Kashmir Valley? When the whole world I sweating blood fighting COVID-19, India has a unique distinction of cross-border terrorism. You may not know it, but the calls of terrorism is given in the name of Jihad. Do you term India’s fight against terror Islamophobia because one of the leaders of terrorism is a Maulana? The whole narrative around Kashmir is centered around terror, not Islam. In fact, Pakistan killed more Muslims in Kashmir than India. Why do you suppose India is treating it as Islam and not as terrorism?

Related Article: Fake Pakistani Propaganda Exposed In An Open Letter To US Congressmen Before Kashmir Hearing

Rohingya: Though Rohingya issue is a prickly one and the genesis of the issue is from the terror attacks of ARSA(again terrorism), one shouldn’t actually question why India should be involved with Rohingya. In fact, most of those who entered India crossed over from Bangladesh illegally into India. Not one of them are registered as refugees in India. Though India is not a signatory of the Global Refugee Conventions, the simple fact that India hosts the Tibetan Government in Exile is a proof that India welcomes those who are suffering, not those who are terrorists or who entered India illegally or those who refused to register with Indian Government. In fact, one should question Malaysia for its anti-Rohingya stand more than India for not allowing those Rohingya through sea turned back mid-sea.

This brings to the other main issue, CAA. Let me put a straightforward question. Which country in the world will accept people who are illegally entering their territory and snatch the jobs of locals? Government estimates themselves state at least 3-10 million people staying illegally in India. Should it really concern an Indian that those 10 million are sent back to their native countries. Does it really matter if they are from a particular community? Is it even worth outraging? In fact, there is no issue over this because NRC is not even formally proposed by the Indian Government. The changes enacted are to grant citizenship to certain persecuted communities from certain communities based on the threat perception and the volume of such cases. The constitutional changes are granting citizenship to a few more persecuted people which is in line with Indian ethos and not removal of citizenship for any Indian, whatever the religion. If this the case, when not one Indian is losing citizenship, why were Indian Muslims instigated to protest against India even to the extent of executing intelligence officers? Let me put a question. If Erdogan crushing a military coup is not Islamophobia, why is the same tagged as Islamophobia in India?

Related article: What Is Citizenship Amendment Act (CAA) 2019? Why Was It Required? Why Are Jihadist/Western Pseudo-Intellectuals Opposing It?

Lynching: One needs to understand the background of lynching. Muslims may be a disproportionate target for lynching but the real question to ask is not what religion they are from, but what were they doing when they were lynched. In most of the cases, it’s cattle theft. Ignoring whether cow is sacred to Hindus or not, if there is rampant theft of your property and with majority of the people are caught in the act or moving suspiciously in an area which is notorious for cattle theft, what would you do? What is happening all over the world, when a person is accused of being a thief? How different is it from what is happening in India? Rather by calling a thief a Muslim, you are insulting Islam. Islam should be looked upon as a religion of peace and something worth emulating, not a religion of bandits and terrorists.

This brings me to the last topic. Tablighi Jamaat. Tablighi Jamaat is an organisation banned in Saudi Arabia, Tajikistan and other countries. Rhetorically, I would want to ask if Maulana Saad, the head of Tablighi Jamaat, enters Saudi Arabia, will he be treated as a state guest or will he be arrested as a terrorist? If Saad and the ruckus created by his followers, which is for everyone to see, not just in India, but in Pakistan, Malaysia, Indonesia with cases noticed from at least eight countries attributed to them(they being super spreaders in India, Pakistan, Malaysia, Indonesia and Thailand), what’s stopping Islam from dissociating itself from Tabligh and it’s crimes against humanity? Saudi arrested a person for spitting in a shopping mall. India cursed the Tablighis for spitting on doctors. Why aren’t both the same?

All of this points to only one thing – Kafirophobia. If a Hindu does that, it’s a crime, but if a Muslim does that, it’s a normal. Rather than educating ignorant Hindus by saying just like ISIS doesn’t represent the views of Islam, Tabligh also doesn’t, why are you punishing those people for confusing between Tabligh and Islam?

On a sad turn of events, while the countries spreading hatred and going even to the extent of maligning the image of royals are let out scot free, and in some cases, influential voices are falling to this Kafirophobia masked as Islamophobia narrative, those who are actually helping build the nations without asking anything in return are suffering under this fake narrative.

On a closing note, it is important to note that, while the first love for an Indian Hindu in UAE is UAE, the first love for a Pakistani Muslim in UAE is Pakistan. It’s upto you to decide what you want to choose between – agenda based Kafirophobia masked as Islamophobia or an amicable world where everyone join hands for the betterment of their countries. Rather than targetting random people over some random comments, authorities should start looking at the antecedents of the complainant, gravity of the crime and more importantly, who benefits if the person is sacked, and who loses.