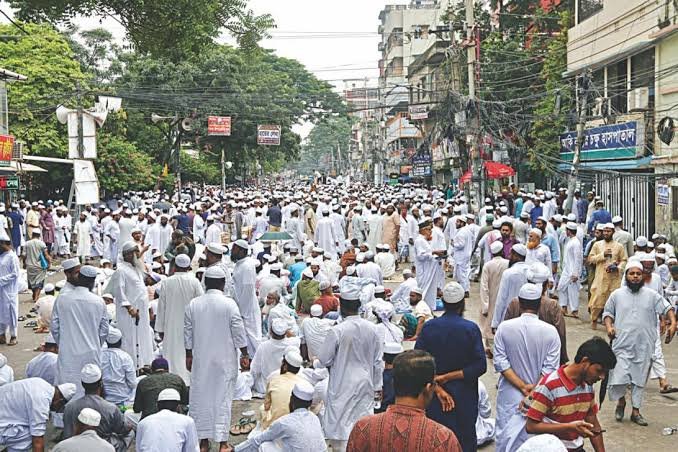 Tablighi Jamaat is Accelerating spreading Chinese Virus in India now. In our previous article we had mentioned in details regarding “Muslim Aalmi Tablighi Ijtema”, what are their objectives and how this Tablighi Jamaat Ijtema was responsible for planning Anti-Hindu Riots in New Delhi and the planning was done in Nepal. Read our our previous article Anti-Hindu Riots In New Delhi Were Planned In Nepal.

Abhijit Iyer-Mitra is senior fellow at the Institute of Peace and Conflict Studies in New Delhi wrote a thread on Twitter about how Tablighi Jamaat Accelerating Spreading Chinese Virus in India using obstinacy, obstructionism & violence. With his permission we have compiled his thread in this article.

Pointing out that Tablighi Jamaat is disproportionately responsible for the spread of a disease is NOT Islamophobia. It comes from the methods of political negotiation that Muslims developed in the wake of 1857 & have been systematically rewarded by both Britain and India

Given their eviction from power, their society never moved past the feudal structure of power capture by few elite families. Given their weak economic & electoral hand: their tactics have remained consistent: escalating through obstinacy, obstructionism & finally violence.

An example of this is Partition. Jinnah starts with impossible maximalist demands, then starts obstructionism, & finally calls for violence. Issue is this pattern was rewarded by the British, then by the Indian National Congress (INC) & now by the BJP. This strategy has proved brilliant for them.

You want proof? Here’s a Hindu lady waving a sword at police and refusing to obey lockdown, police immediately Lathi charged her & her followers.

But when the Tabligh Jamaat people do it, repeated police missions have to beg and please with them. Finally the NSA has to go crawling like a beggar. Imagine the NSA of 1.3 billion representing a party with an absolute majority of 303 seats, held hostage by 2000 people.

Understand be it partition, be it Shaheen Bagh, be it Nizamuddin Markaz, every government has succumbed to this kind of blackmail. Consequently they backup position has and will always remain one of obstinacy – no matter what the law, because every law is an opportunity.

For the Muslim leadership of the country to extort concessions. Remember rewarding bad behavior leads to more bad behavior. That is the essence of appeasement and that’s what Modi has been doing.

Example: this behavior follows the template – What Tabligh Jamaat did, refusing to comply with orders was Stage 1 (obstinacy) now what these scumbags are doing is Stage 2 (obstructionism). You know what comes next in Stage 3? Congrats.

You see Stage 3 (violence) has set in. Thanks Modi! Thanks Doval!

And another example of stage 3, all from Nizamuddin Markaz attendees, BULLETS were fired and stones pelted upon police in Bihar (In Indian State) by the members of Tablighi Jamaat, who attended Nizamuddin Markaz.

From earlier today, Stage 2 by a Tabligh Jamaat fellow who attended Nizamuddin Markaz. When asked to come for corona testing he says “go test Modi he travelled to 120 countries, go test EPS, OPS (Inititals of Chief Minister & Deputy Chief Minster of Tamil Nadu, an Indian State) they have corona”

In Secunderabad, Stage 3. The family of a 59 year old man who died after returning from the Nizamuddin Markaz beat up medical college students, for letting him die. Notice the absolute impunity with which they behave – state or centre.

Meanwhile in Muzaffarnagar (another Indian City) full stage 3: cops grievously injured while attempting to do their jobs & disperse a crowd.

GRAPHIC WARNING: the cops beaten up in Muzaffarnagar.

This is how the health care workers were abused by the same people they were trying to help.

Gomtipur in Ahmadabad (another Indian City) – again police going to get attendees of the Nizamuddin Markaz for medical screening were attacked with stones. See the pattern? First it was just Stage 1 laughable videos on how “Corona Allah ka NRC hai”, and within days this. (Muslims were making videos and spreading on TikTok with the message that Chinese Virus is the wrath of Allah and those Allah does not like will be taken away from this world, but they are silent when Muslims attending their religious congregation are dying)

Understand what happened. Thanks to the Tabligh Jamaat & their infernal Nizamuddin Markaz, India’s efforts to flatten the curve have been delayed by between 2 weeks to a month. What’s even more amazing is instead of being repentant and cooperating, they’re defiant & violent.

Apparently they’re convinced this is one more of their routine political negotiations – their cooperation even during a national emergency will have to be “bought”. The threat of spreading Chinese Virus Corona is the 2nd currency of this negotiation & Modi sending Doval validated it.

In Rajasthan, still deliberate defiance Stage 1 – obstinacy. As a community it surely can’t be a collective act of cognitive disability given how diverse the community is? No. This is ingrained behaviour.

The Indore doctor attacked in the video above (13n) relates what happened. After a positive test in the area, they went back. After initial cooperation, the mood suddenly turned. Why? Ask yourself why?

It wasn’t just health care workers attacked in Indore. Even the Safai Karamcharis (Sanitation Staff) were attacked – people cleaning their streets for them!

Meanwhile in Bengal, this preacher wants crores of people dead from corona. Classic stage 1 provocation setting the ground for imminent violence. Action against him? Zilch.

Bengaluru (IT Capital of India) is next. This ASHA worker (Accredited Social Health Activist) collecting stats on Chinese Virus COVID was attacked by a mob after an announcement from the local mosque. Notice how the attacks on ALL government services: health, sanitation, police by Muslims are spreading across India?

A Dinamani reporter by the name of Thirumalai, in Dindigul was beaten up by a Muslim reporter and a Muslim mob he collected. His crime? Reporting that 85 people from Dindigul attended the Tablighi Jamaat Nizamuddin Markaz.

Meanwhile in Delhi, attendees of the Tabhleegi Jamaat and Nizamuddin Markaz are objecting to testing though 23 out of 24 turned out to be Chinese Corona Virus positive. They’ve gotten so threatening that police has had to be deployed in the hospital.

Meanwhile in Noida stage 2 obstructionism. Case has been registered against one Salik for assembling this congregation on the roof. Obviously if cops try do anything it’ll progress to stage 3.

Like I said the Muslim polity, considers everything calamity an opportunity to extract concessions. Here Maulana Saad of the Tabilghi Jamaat has issued “demands” from hiding. Same man who told his followers Chinese Virus COVID was a conspiracy to divide Muslims.

Later on I’ll get into why sections of the press either underplay this, bring in false equivalences, or spread conspiracy theories like the tweet below. Needless to say the “secular” press has a mutually beneficial business compact with the feudal Muslim polity.

Beginning of Stage 1, in KIMS hospital in Hubbali by the Nizamuddin Markaz folks. watch how this rapidly progresses to stage 3

Ask yourself why is it in a normally violent country like India, only one community is reacting so violently against Chinese Virus COVID control measures? One explanation could be this apocalyptic messianism “#Corona is from Quran”

Then we have conspiracy theories like Maulana Saad “corona is an anti Muslim conspiracy”, But how can two such contradictory beliefs (corona=Quran & corona=conspiracy) still lead to the same conclusion of “oppose #COVID control measures”?

In many ways this isn’t different from extreme religiosity that Judaism saw till the Bar Kokhba rebellion in 137AD put an end to both social control by priests as well as apocalyptic messianism. Anyway sorry for the diversion, but I thought it’s important to give some context

In Dongri (north of Mumbai) today. Stage 2: The acts of deliberate and calculated public defiance just seem to be increasing. This is still too small a gathering for it to escalate to stage 3 in Dongri at least

Mind your not one of these people will be charged with attempted murder, which it clearly was. NOT ONE! Slim chance if they get charged liberals will spin the “wow you’re victimising a COVID patient for contracting COVID? Let that sink in” line

Nobody knows why these Tablighi Jamaat folks defied lockdown and decided to holiday in Goa instead of heading home. So much for asking the SDM for “cooperation to get home” on the 24th (remember that)?

Meanwhile never forget folks like Dr Zakiya, doing their duty. She was one of those injured in the stone pelting yesterday and went back to work despite being injured.

And while the police were acting like impotent eunuchs in front of the Tablighi Jamaat look at their bravery dealing with Hindus! My my my, when the target is supine, what courage swells in police hearts. A temple in Tamil Nadu

One event – just one event – by the Tablighi Jamat has destroyed the curve that India had succeeded in flattening by day 7. Just one event – knockdown effects on everybody, especially the poor.

Tablighi entitlement is amazing. The lawyer is complaining that they’re kept 4 to a room & it’s taken 3 days since they got tested. Barkha points out that the rest are in general wards, had to transport themselves to hospital & are waiting much longer

Entitlement part 2: while the Tablighi Jamaat succeeded in singlehandedly destroying India’s attempt to flatten the curve, & the chief is absconding, they’re more worried about the number of tweets dedicated to covering their crime

About the Author: Abhijit Iyer-Mitra is senior fellow at the Institute of Peace and Conflict Studies in New Delhi.

Muslims are following the dictates of Tablighi Jamaat and accelerating spreading the Chinese Virus deliberately in India. Another evidence is this video shared on social by another user shows how Muslims are touching each and every fruit also they are selling. Is this not the dictate of Tablighi Jamaat and not accelerating spread of Chinese virus in India?

There are also videos going viral on Chinese app TikTock showing Muslim applying his spit on Indian Currency Notes and giving a Warning to Non-Muslims.

Question to be asked to Indian Government. How is this Fruit Vendor who is deliberately applying his spit to all the fruits he is selling or the Muslim applying his spit on Indian Currency Notes not different from a mass murderers or a Terrorists who takes lives of many innocent civilians including Old, women and children? Should Indian Law be not modified for Quick Death Penalty or Shoot at Sight to such Terrorists?

How long Indian Government will follow the policy of Appeasement of Muslims? When it comes to Hindus, the Law is the first to take action in India. But when it comes to Muslims, Muslim VETO Power rules. India has spent Billions of Dollars on its Health Services in past weeks, converted Rail Coaches into Mobile Hospitals, Created many make shift hospitals. All these steps to flatten the curve of spread of the Chinese Virus. However Tablighi Jamaat and Muslims have VETOED all efforts of Indian government and Muslims are still offering Namaaz in Mosques, in streets, on Roads and even in the hospitals. They are still spitting around, urinating in the open in the hospitals. Those who are not infected will also be infected if this continues. All the Billions of Dollars spent will go waste.