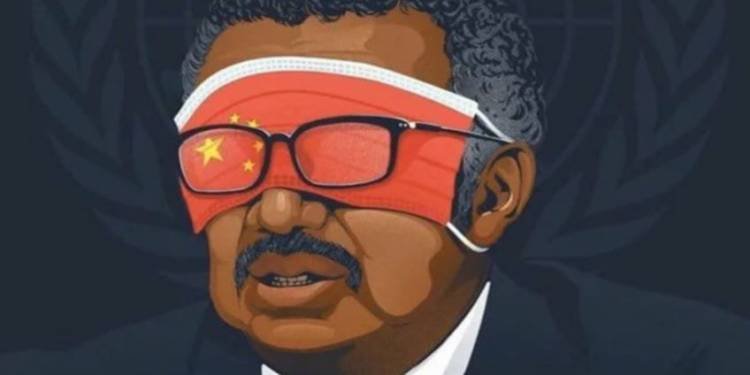 Is the new WHO – World Health Organization a China’s Lap Dog? When the whole world contributes to WHO, why has WHO demonstrated that it is a Lap dog of China and will do what China tells its puppet to do?

The world is a situation where it is not able to decide whether the current pandemic is due to China’s subterfuge or because of WHO’s incompetence. Clearly, WHO has proved it’s incompetence in handling the crisis. Are we tricked to believing that it is WHO’s incompetence and not malice on part of WHO. Take a few examples.

Initial warnings ignored by WHO

In December 2019, Taiwan notified WHO of person to person transmission.

In Jan 14 2020, WHO declared there is no person to person transmission.

An estimated 7 million people flew out of Wuhan in January and infected the whole world. A study mentioned that had WHO acted at least one week before, the global spread would have been cut down by 66% and had it acted three weeks before, the epidemic would have been 95% contained.
Read in Details here: Early and combined interventions crucial in tackling Covid-19 spread in China

WHO became the propaganda machinery for China. Ensured Chinese Virus is not tagged with China

While China is the root cause of the problems, WHO lauded China’s preparations to tackle the virus and questioned countries like America for proofing themselves. On Feb 3, he said, “There is no reason for measures that unnecessarily interfere with international travel and trade. We call on all countries to implement decisions that are evidence-based and consistent”. Read complete article: WHO Chief Urges Countries Not to Close Borders to Foreigners From China

A flurry of statements came from WHO to ensure it is not tagged with China.

WHO said, Kind quick reminder: viruses have no nationality

Mike Ryan, the executive director of WHO’s Emergencies Program: Viruses know no borders and they don’t care about your ethnicity, the color of your skin or how much money you have in the bank

Predictably, such things became a part of China’s propaganda factory in no time.

Read : Tedros Adhanom Ghebreyesus: The Ethiopian at the heart of the coronavirus fight

Big Misinformation Campaign by WHO

WHO lauded the preparations of, of all countries, Pakistan while Pakistan’s preparations is nothing short of a disaster.

WHO told that pets won’t be infected. Cases of at least two dogs and one cat getting infected surfaced.

When the whole world is going into a lockdown, the head of WHO advocated no lockdown.

“Asking people to stay at home & shutting down population movement is buying time & reducing the pressure on health systems. But on their own, these measures will not extinguish epidemics.”

Clearly, irritated by WHO’s handling of the crisis, France ordered usage of Chloroquinone in spite of WHO warning countries not to.

American President Donald Trump himself said, “It (WHO) has been very very much sided with China. A lot of people are not happy about it”

All this raises a question, is this incompetence or is this deliberate.

One avenue which can be looked into, is the personal conduct and integrity of the Director General of WHO Tedros Adhanom Ghebreyesus himself.

After his visit to China, he tweeted on Jan 29, “Just back from China where I held frank talks with President Xi Jinping, who has taken charge of a monumental national response to the #coronavirus outbreak. Based on cooperation & solidarity, China has committed to protecting its citizens & all people globally from the outbreak.

I welcome the invitation by China for WHO to assemble and lead an international team of experts to assess the new #coronavirus outbreak & support Chinese counterparts. I appreciate such openness & urge this to continue from China & all other countries.

I was struck by the determination of Chinese leadership & it’s people to end the new #coronavirus outbreak. They are suffering the most. Their lives & economy are bearing the brunt of the outbreak as they make sacrifices to contain it. China needs the world’s solidarity & support”

This is in spite of China punishing people trying to warn the world about the outbreak.

The Chinese Doctor Who Warned About Coronavirus Outbreak Is Dead

Tedros himself had a checkered history. Tedros was elected to his position with the WHO in 2017, despite the fact that he was not trained as a medical doctor and had no global health management experience. A former minister of health and minister of foreign affairs for Ethiopia, Tedros is an executive member of the Tigray People’s Liberation Front (TPLF) political party, which came to power through a struggle in 1991 and has been listed as a perpetrator in the Global Terrorism Database.

He worked closely with China during his time as Ethiopia’s health minister, and China backed Tedros’s 2017 bid for WHO director-general. He presided over three ill managed and covered up Cholera Outbreaks as the Health Minister of Ethiopia. Though he goes by “Dr. Tedros,” the WHO chief isn’t a medical doctor but has a PhD in public health.

‘Not cholera but acute diarrhoea,’ WHO chief has a history of covering up epidemics & sucking up to China

He declared the 2017 Cholera Outbreak in Ethiopia and Sudan as extremely watery diarrhoea.

Ethiopia doesn’t want you to know these things are happening in the country.

He appointed Zimbabwe’s Robert Mugabe as WHO’s Goodwill Ambassador only to rescind the definition due to a global outcry.

China Helped Put This Man In Charge Of the World Health Organization—Is It Paying Off?

Another week, another scandal at the United Nations.

“Diplomats said [Mugabe’s] appointment was a political payoff from Tedros Adhanom Ghebreyesus — the WHO’s first African director-general — to China, a long-time ally of Mugabe, and the 50 or so African states that helped to secure Tedros’s election earlier this year”

WHO decided to endorse Chinese Traditional Medical System after Tedros came to power.

“When Xi Jinping ordered his health officials to develop drugs using “integrated Chinese traditional herbal medicine and Western medicine,” the WHO’s “Q&A on COVID19” immediately changed a vital piece of information in the section which pointed out the list of measures deemed ineffective against the coronavirus.”

In 2016, under China’s influence, WHO stopped Taiwan from attending the World Health Assembly and in technical meetings.

WHO stared addressing Taiwan as Chinese Taipei and on Feb 28, when number of cases in China is only 34, WHO termed Taiwan as a high risk country hurting the country badly with many countries stopping flights.

Vietnam and Philippines noticed the mistake and rolled back the decision.

It further surfaced that Taiwan notified WHO of human to human spread of the virus as early as December but WHO decided to ignore the advice.

Taiwan Wants to Help Fight the Coronavirus. WHO Won’t Let It.

Timeline: The early days of China’s coronavirus outbreak and cover-up

It has surfaced that ICAO is also a part of this game of blocking Taiwan.

Is WHO – World Health Organization following a Political Agenda?

If you navigate to who.int website for Who and go to the Coronavirus disease (COVID-19) Situation Dashboard, you will find the World Map. Zoom over the Map of Israel. What do you see?

You can clearly see the Occupied Palestinian Territory shown separately.

Now locate Taiwan in the same map. You will be surprised to notice that Taiwan is not marked separately and is shown as part of China.

Another hint over the biased attitude came, when a journalist asked WHO’s Bruce Alyward about Taiwan while the WHO office bearer in question refused even to acknowledge the existence of Taiwan.

It is also alleged that WHO created scaremongering in some countries where there were no cases reported. Example is Bangladesh.

Bangladeshi and US-based researchers of WHO estimated that there could be as many as 500,000 deaths in Bangladesh between March and May. Without saying we can infer that after the recent announcement by Jack Ma of Alibaba, the subsequent orders for masks, ventilators and other equipment would go to China.

– Read this article at: http://southasiajournal.net/united-nations-interagency-covid-19-memo-without-interventions-upto-2-million-people-may-die-in-bangladesh/

What is the job of WHO – World Health Organization? Is WHO paid by member countries for doing politics? Is this all being done at the behest of China? Would WHO not be called a Lap Dog of China?

Should a Tainted person with no qualifications for the job and who is just a Lap Dog of China be allowed to run the affairs of WHO – World Health Organization whose effective functioning means lives of millions can be saved? Why did Tredos not tackle Chinese Virus within Wuhan in the early stages? Why were people from Wuhan allowed to travel in the early stages? Why did WHO – World Health Organization under the instruction of its master who held the leash around its neck, not paid any heed to the warning and information from Taiwan? Why was the information provided by Taiwan discarded without raising an alarm and diligently checking? Why was the information provided by Taiwan not investigated using independent experts? Why did WHO continued to wait for instructions from its masters in China?

Shameful conduct of WHO and Tredos has made WHO – World Health Organization a big bloody Joke. All the countries who have contributed funds in past decades to WHO feel cheated. Every country is now relying on its own research rather than the common research of WHO affiliated experts. Present Pandemic has exposed that WHO is nothing but a Chinese Lap Dog.

Is China Rattled With Chinese Virus? Will World Demand Compensation?