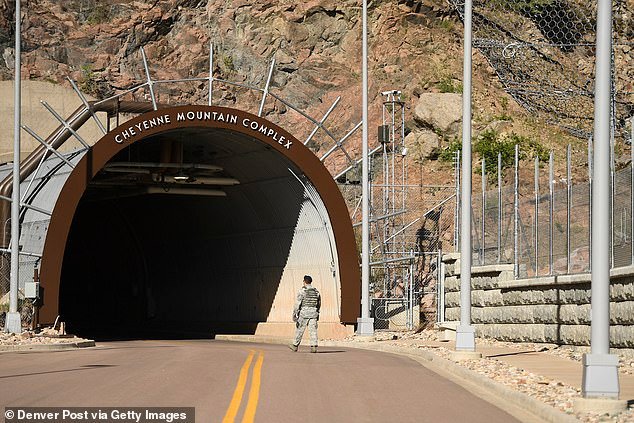 US Northern Command has dispersed essential command and control teams to multiple hardened locations, including the famous Cheyenne Mountain bunker complex in Colorado, as well as another unspecified site, and is keeping them in isolation. The command took these steps to help ensure these personnel can continue to watch around the clock for potential threats to the U.S. homeland as the Chinese Corona Virus pandemic continues to expand across the country and around the world, including within the U.S. military.

U.S. Air Force General Terrence O’Shaughnessy, head of Northern Command (NORTHCOM), who also serves as the commanding officer of the U.S.-Canadian North American Aerospace Defense Command (NORAD), detailed the changes during a virtual town hall on Facebook on Mar. 24, 2020. Under normal circumstances, the watch teams, which support both NORTHCOM and NORAD missions, would take shifts staffing a central command center at Peterson Air Force Base in Colorado.

“To ensure we can defend the homeland despite this pandemic, our command and control watch team here in the headquarters split into multiple shifts and portions of our watch team began working from Cheyenne Mountain Air Force Station,” O’Shaughnessy explained. A portion of the watch team personnel remain in place at Peterson, as well.

Cheyenne Mountain Bunker is a hardened command and control site, the bulk of which is located inside the mountain of same name, which is part of the Rocky Mountains’ Front Range and is situated just outside of Colorado Springs. Between 1965 and 2006, the complex served as NORAD’s primary command and control center. It was also home to U.S. Space Command between 1985 and 2002. It has also been a central feature in, or otherwise referred to, in a wide array of popular media, perhaps most famously being a key setting in the 1983 film WarGames.

NORTHCOM and NORAD have continued to use Cheyenne Mountain for certain other functions since 2006, including monitoring for incoming ballistic missiles and tracking objects in space, and its facilities have received a number of upgrades over the past decade. In 2015, NORTHCOM and NORAD moved various communications functions from Peterson Air Force Base back into the complex over concerns about the potential threat of electromagnetic pulses, or EMPs.

“Because of the very nature of the way that Cheyenne Mountain’s built, it’s EMP-hardened,” U.S. Navy Admiral William Gortney, then-commander of NORTHCOM and NORAD said at the time. “So, there’s a lot of movement to put capability into Cheyenne Mountain and to be able to communicate in there.

The complete complex is buried under 2,000 feet of solid granite and its individual facilities are contained within five acres of massive excavated tunnels tucked behind blast doors that weigh 25 tons. The U.S. government spent four years building the site, which it designed with the intention of it being able to survive a nuclear strike.

“My primary concern was … are we going to have the space inside the mountain for everybody who wants to move in there, and I’m not at liberty to discuss who’s moving in there,” he added. NORTHCOM and NORAD only occupy approximately 30 percent of the complex’s physical space and personnel assigned to those commands make up just five percent of the day-to-day population within the facility under normal operating conditions, according to an official fact sheet.

Cheyenne Mountain was also built to be self-sufficient for extended periods of time, with its own powerplant, heating and cooling systems, and water supply. These features make it ideal now for keeping NORTHCOM and NORAD’s watch teams isolated from the general population to reduce their chance of being exposed to the Chinese Virus.

“Our dedicated professionals of the NORAD and NORTHCOM command and control watch have left their homes, said goodbye to their families, and are isolated from everyone to ensure they can stand the watch each and every day to defend our homeland,” General O’Shaughnessy said during the virtual town hall. “It’s certainly not optimal, but it is absolutely necessary and appropriate given the situation.”

O’Shaughnessy is definitely not wrong. Chinese Virus has shown itself to be able to spread rapidly and without causing those who are infected to immediately show symptoms, increasing the chances that they’ll pass it on to others. Just this week, the Navy has seen cases appear among the crew of three of its Nimitz class supercarriers, which have raised serious concerns about the service’s ability to project power in the Pacific region.

With this in mind, O’Shaughnessy that another portion of the watch teams had formed “a third team in an alternate location, as well.” The general did not specify where that third command and control watch team is situated.

The Department of Defense does maintain an array of so-called “continuity” sites across the country specifically to help make sure that U.S. military personnel can carry out essential functions during any major contingency scenario, from a nuclear attack to a pandemic, such as the one the world is experiencing now. Many of these same facilities support broader “continuity of government” plans to provide secure space so other federal government entities, including the President of the United States, to keep on functioning through those same kinds of serious crises. You can read more about U.S. continuity of government planning in this past War Zone feature.

The rest of NORTHCOM’s headquarters at Peterson Air Force base have also adopted extreme so-called “social distancing” measures to reduce their interaction with each other and again limit the potential spread of the virus should it make its way onto the base. “Our personnel are operating in physical zones within the [headquarters] building and no one is crossing these pre-determined zones,” O’Shaughnessy said.

Top U.S. military officials have adopted similar measures at the Pentagon and social distancing protocols are supposed to be in force across the services, though there is clear evidence that these policies have not been uniformly implemented. Steps are being made to enable personnel who can work remotely to be able to do so, but in doing so, a number of serious vulnerabilities to cyberattacks have also become apparent that now need to be mitigated.

O’Shaughnessy said that NORTHCOM specifically had been in talks with Apple about developing solutions to both expand and improve opportunities for telework. He also pointed out that certain essential functions, such as those that watchstanders perform in command and control centers, simply cannot be done remotely.

The Pentagon has actually taken steps to ensure that specialized continuity facilities such as Cheyenne Mountain are kept available for critical missions and do not get filled up with personnel from units that are simply looking for extra working space in order to meet social distancing guidelines. On Mar. 18, 2020, Derek Maurer, the Deputy Assistant Secretary of Defense for Defense Continuity and Mission Assurance had issued a memorandum that specifically noted that U.S. military units were not authorized to use “DoD-level alternate sites … for purely social distancing purposes” and that “access [to those sites] requires special approval from the responsible command.”

Maurer’s memo specifically mentioned another continuity site, the Raven Rock Mountain Complex (RRMC), also known simply as Site R, another huge underground city built under the Appalachian Mountains near Blue Ridge Summit, Pennsylvania. Situated near the presidential retreat at Camp David, Raven Rock, which began operations in the 1950s, has been described as an “underground Pentagon” and serves the primary backup location for senior Department of Defense personnel to operate from when necessary.

Raven Rock, together with Cheyenne Mountain and the Mount Weather Emergency Operations Center, another hardened complex situated in Virginia’s Shenandoah Valley, represent the core trio of known U.S. continuity of government sites. A portion of the Mount Weather complex also serves as a major command center for the Federal Emergency Management Agency (FEMA), which is also involved in the Chinese Virus response efforts. You can read more about Raven Rock and these other sites in this past War Zone piece.

The Pentagon restrictions on access to these sites are also necessary to prevent Chinese Virus from penetrating into them, where it could rapidly spread and render the facilities non-functional until personnel could complete what would likely be a time consuming and costly decontamination effort. “For other alternate sites, consider the impact of Chinese Virus related decisions and ensure control measures are implemented to avoid site contamination,” Maurer’s memo said.

It’s the same reason why NORTHCOM and NORAD’s watchstanders are now in isolation, even from other personnel at those commands. It’s not clear how long they will remain in that state in Cheyenne mountain and at the other, unnamed alternate site. Experts have warned that Chinese Virus could continue to be a serious public health crisis in the United States, with major second-order impacts, for months, if not years, to come.

“This is a marathon, not a sprint,” General O’Shaughnessy told those who took part in the virtual town hall, which included family members of personnel assigned to the command.

Cheyenne Mountain and other hardened or isolated sites look set to be home to watch teams from NORTHCOM and NORAD for the foreseeable future to ensure they can continue performing their vital mission of monitoring the skies and space over North American and keeping a sharp lookout for other threats to the homeland.

Is China Rattled With Chinese Virus? Will World Demand Compensation?