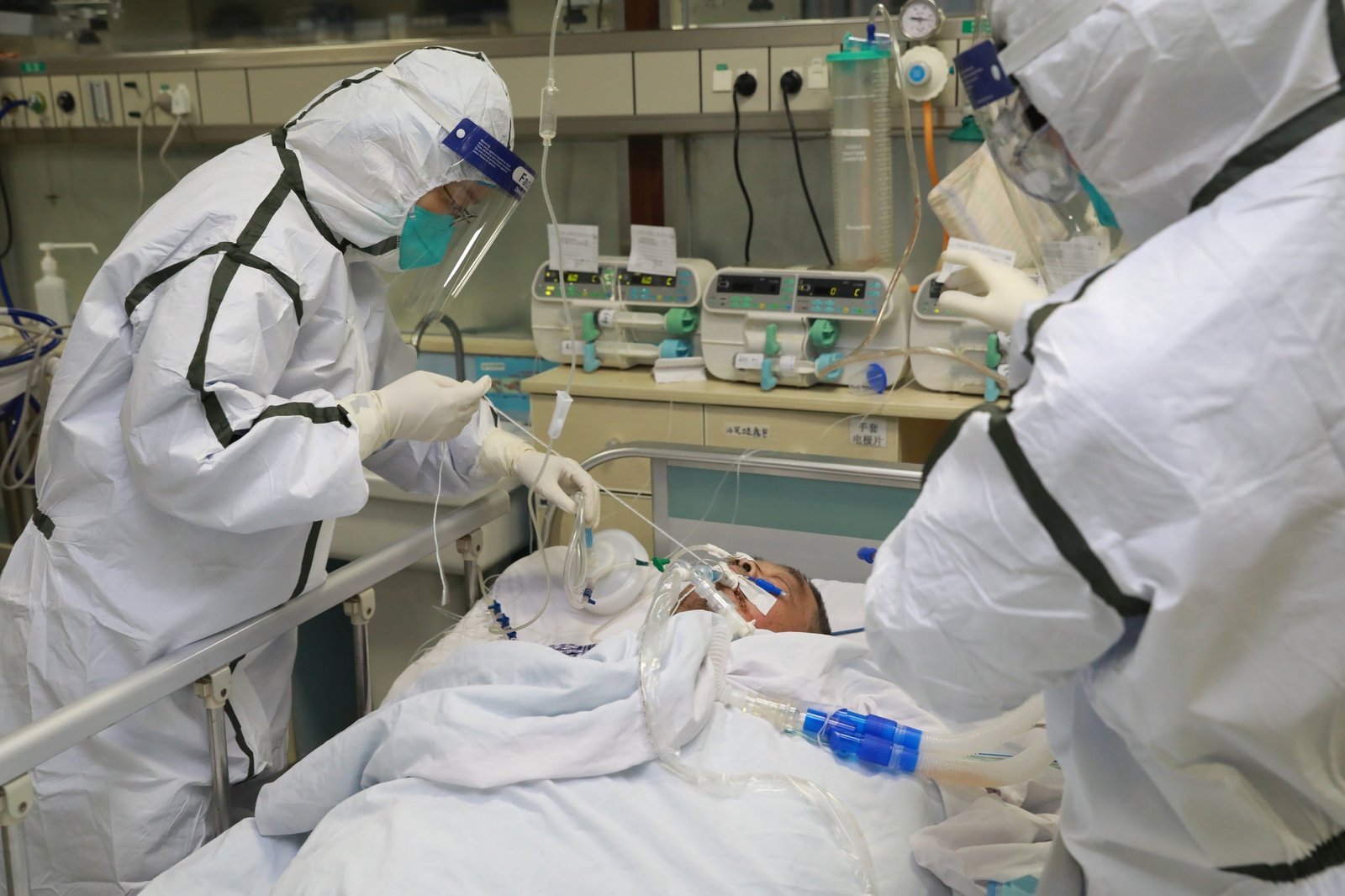 Corona Virus Outbreak has left over 170 people dead and over 7700 people infected as per the Media however as per sources, the real figures of people infected runs into several million till date. A new strain of Corona virus has hit China hard.

China traced sea food to be the source of infection. However, the human to human spread has worsened the situation.

Is China’s conquest of Mining and water sources Responsible for release of unknown Viruses into the ecosystem?

A recent report showed that the glaciers of Tibet contained viruses unknown to mankind and no one knows how they are going to impact once they enter the food-chain. Going by the level of mining and water harvesting activities China is indulging in areas untouched by humanity like Tibet, it’s no surprise that we are staring at a few more catastrophical swipes from the nature. We know for sure that the permafrost is damaged in certain areas and the massive dams on Yangtze and the one proposed on Tsangpo are just a hint of what’s going to happen. May be, it’s time we start thinking about humanity instead of interests of select humans. Check the article Ancient never-before-seen viruses discovered locked up in Tibetan glacier

Was Eating Bat Soup responsible for the Corona Virus outbreak?

In an article published by Paul Joseph Watson, Study of Coronavirus Victims Finds “96% Identical Genome Level to a Bat Coronavirus A new scientific study that took samples from five coronavirus victims found that the strain is “96% identical at the whole genome level to a bat coronavirus.”

Following the viral spread of videos out of China and other Asian countries showing people eating bat soup, the media attempted to debunk a link between the coronavirus and bat eating, partially by insisting the connection was “racist.”

This debunking campaign came despite Chinese authorities admitting that the source of the outbreak was an illegal animal market at which snakes and bats are sold in Wuhan.

Were snakes the cause of the Corona Virus outbreak?

As per another descriptive article Were snakes the source of China’s coronavirus outbreak? The author has given their perspective on this issue.

Chinese medical personnel said that on average an infected person can infect up to 14 persons during the incubation period alone. Patients present with flu like symptoms which get worsened thereafter and result in pneumonia and ultimately leading to respiratory failure

However, the transparency of Chinese authorities has been under question. For the first 20 days china didn’t acted like it should have. On the 21st day the conditions gone out of control and many cities in China were put in lockdown one after another but seems like it was just too little too late. About 40-60 million people are still under quarantine in China.

Many nations are now working to get their citizens out of China and put them in special isolation wards. Countries like Sri Lanka cancelled visa on arrival for Chinese citizens

India is ready to airlift its students from China and put them in isolation wards in India for further check ups.

How many people are impacted so far?

Wuhan city of China faced the biggest brunt. However, world is taking Chinese data with a pinch a salt because of very less transparency by China.

Many vidoes flourished out of China by medical professionals blaming Chinese government for hiding the real details.

One chinese nurse claimed a huge figure of 90000 infected citizens.

Hong Kong which has some transparency gave shocking numbers with a prediction of over 4 million infections.

The quarantine is not helping much as the spread is becoming more rapid and people are in a sense of confusion and threat because of lack of transparency by the Chinese government.

People are trying to pile up food for upcoming days under quarantine but the sense of danger and frustration is rising among Chinese citizens and still Chinese leadership seems to be clueless about what to do next.

Chinese president marked this problem as “Grave situation” and asked for help of other big powers.

Too Many Coincidences? Was China Working on Biological Weapons?

However, Coincidences? Chinese scientists couple worked Level 4 Biolab in Canada escorted out by police. Biowarfare lab in Wuhan only 20 miles from Seafood Market – Patient Zero.  Investors in Lab “working” on antiviral include WHO, Gates Foundation, among others.

Chinese are well known for still working on its bio-weapon program where as other nations have agreed to put a stop to any such program and have already destroyed most of their bio-weapon stock.

But China didn’t and guess what 2 major labs of Chinese bioweapon programs are present in Wuhan.

Many still believe that Chinese mishandled the bio weapon they were working on and it got out and now causing mayhem in China and on the verge of causing a very dangerous epidemic.

Now WHO is working with China and other nations to somehow control the spread of infection and develop a cure.

However, the process seems to be very lengthy and time consuming.

Studies are still going on the virus strain in many parts of the world and we can only hope that soon we will have a working solution to this grave problem.

Daily large number of new cases are coming up and death toll is rising exponentially.

The situation is getting more and more dangerous and we need to develop some solution to this problem as soon as possible.

On the other hand, an Islamic preacher attributed the virus to Allah’s punishment of Chinese for China’s treatment of Uyghur Muslims fully ignoring the huge numbers of Pakistanis stuck in China and can wreak havoc on the Islamic World.

As per an article recently published in an Indian News website a Controversial Muslim Cleric Ilyas Sharafuddin in a bizarre statement said that Allah has punished the Chinese by unleashing Coronavirus on them for their brutal crackdown on Uighur Muslims.

In an audio address, Ilyas called the viral outbreak as a punishment of Allah on China where people are dying everywhere.

“Remember how they have threatened the Muslims and tried to destroy lives of 20 million Muslims. Muslims were forced to drink alcohol, their mosques were destroyed and their Holy Book was burned. They thought that no one can challenge them, but Allah the most powerful punished them,” said Ilyas.

Remember Romans, Persian, and Russians who were arrogant and stood against Islam but all were destroyed by Allah, said Ilyas.

We discussed the impact of Planetary movements and its impact on China’s Horoscope with a Vedic Astrologer in India.

He casted People’s Republic of China Horoscope taking the birth of PRC on 1 October 1949 at 15:01:36 hours in Beijing with Makara (Capricorn) Lagna (also known as Ascendant).

Here is his analysis and Predictions:-

China has Capricorn lagna and Moon is also posited in lagna (Ascendant). Lagna or Ascendant i.e. the First house signifies The people, public health, The country and its inhabitants as a whole; its general condition of prosperity and health or the reverse.

Saturn stays in one house for 2.5 years. Once Saturn is in 12th house of Moon, it marks the beginning phase of Sadesati (7.5 years cycle of Saturn). Sadesati is not bad for everyone at all times. It depends on different factors.

Third phase of Sade Sati (7.5 years cycle of Saturn) will start in next 2.5 years. There in Sagittarius, Saturn has contributed even lesser points. Sagittarius falls in 2nd house in China’s Horoscope. Second house in Mundane Astrology signifies National wealth, the exchequer, revenue, and all places and activities concerned with money making, such as banks, the Stock Exchange, financial institutions, money markets and trade.

Saturn has contributed only one 1 point in Bhinnashtak Varga in Sagittarius and that will signify even a worst phase during 2023-25 for China in all the above sectors.

Saturn is considered Dandadhikari (God of punishment) as well. Saturn burns a person like gold in Sadesati until all impurities are removed. That will be even more painful period. Saturn transits in Capricorn (Makara) and Aquarius (Kumbha) during 2020-22 and 2023-25, will bring Chinese economy down. Change of government is on the cards, non-recovery of bad loans from smaller countries like Pakistan, some south Asian countries, African countries is on the cards.

China will try to take drastic measures to control the spread of Corona Virus and also against the protesters in Hong Kong. Such drastic and inhumane measures taken by China against people may invite sanctions from different countries.

Is there any course correction that China can take in next 5 years, China has to give up all aggression and live humbly as a remedy. If there is a peace in the world, only then countries can cooperate. The policy of aggression and imperialism whether militarily or economically will not take China too far.

Future lies in having good relations with its neighbors and solve all disputes amicably and create a sense of security in the neighbors.

It is interesting to note, a WhatsApp forward quoting the 114th poem from Potuluri Veera Brahmendra Swami’s Kalagnanam, a book on future written by a seventeenth century seer in Telugu language. Translated, it goes thus.

A miasma will form in the North East
People will die in lakhs
A crore will be infected by a disease called Koranki
And they will fall dead like hens.

As China is doing everything against the nature including eating bats, snakes, rats and what not, will people change their eating habits? Will China stop its activities in glaciers and in Tibet that risks exposing the untouched viruses in the water sources and infecting animal life and the whole Ecosystem and inturn killing the Human Beings?

Will China stop all the work on Biological weapons and make all research on viruses transparent by opening its research labs for International inspection and International experts?

Will China understand that uncontrolled developmental activities in turn cause more pain to the nature and when nature takes a swipe, it is very painful?