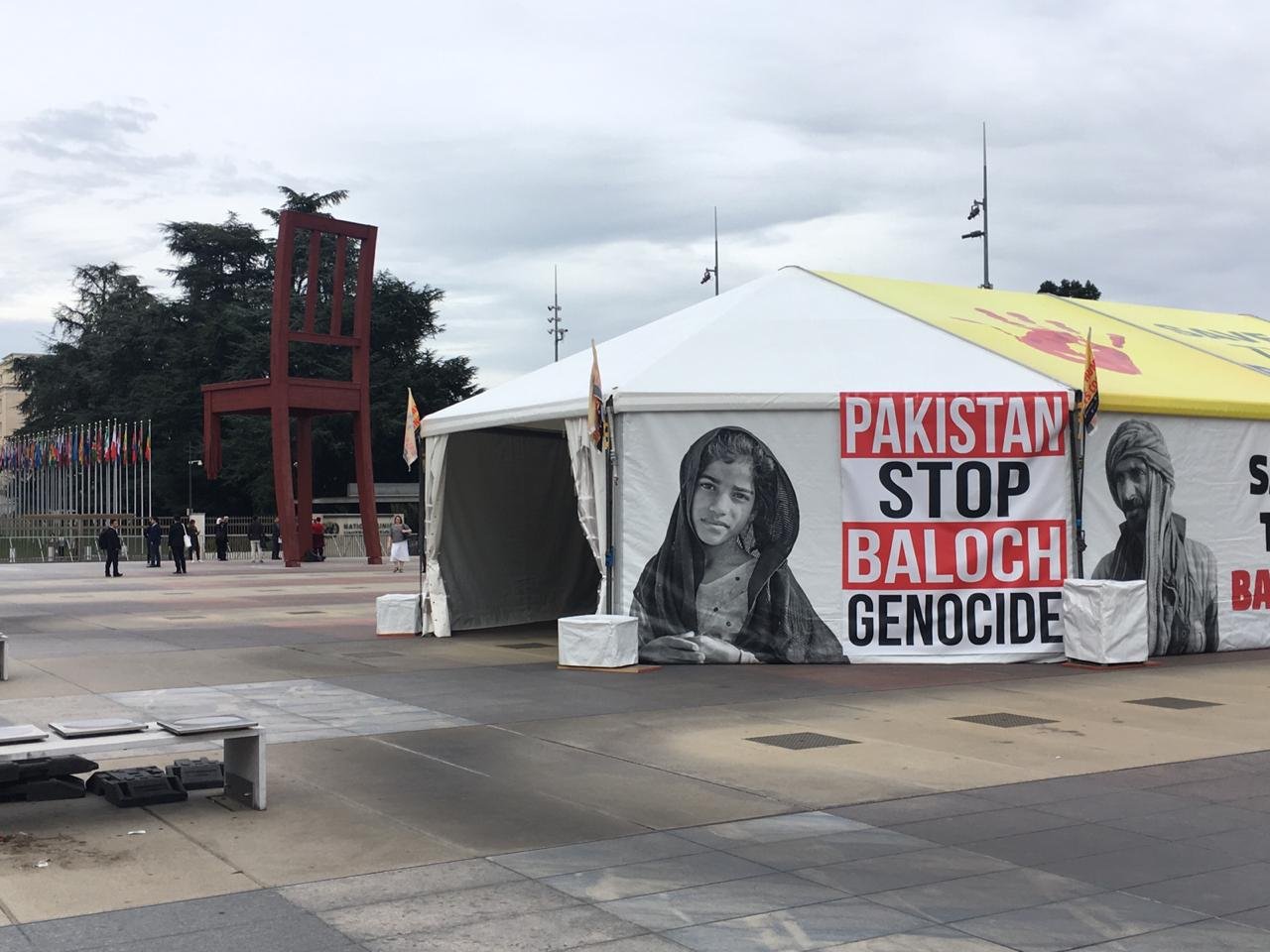 There is an increasing demand that the UN intervene immediately, and the Pakistan Army Generals and top brass be tried for War Crimes and Human Rights Abuses in the International Court of Justice.

There is a growing demand that the Assets of all these Pakistan Army Generals that they have amassed by committing Human Rights Abuses, Organ Harvesting from Poor people, exploitation of natural resources of Balochistan, running rape cells be confiscated and spent towards the betterment of people.

Through a series of previous articles, we have tried to highlight the Gross Human Rights Violations by Pakistan Army at the behest of their top Generals.

It needs to be seen that UN Human Rights Council will be moved by the cries of the millions of Baloch, Pashtun, Mohajir, Sindhi, Hazara, Ahamadiya, Hindus and Christians or will do what is Politically Correct to please Pakistan?

People are saying that Pakistani Muslim Grooming Gangs have razed UK, no politicians as of today have guts to stand against Pakistan in UK. Similar is the situation in rest of the Europe. Islamist Radicals under the garb of Refugees have taken over Europe. Will the representatives and leaders from these European Nations who could not save their own countries have guts to speak against the Human Rights Abuses by Pakistan Army?

In a video we obtained, Pakistani Journalists trying to hide the Killings of Baloch Civilians. Instead of reporting it to the world, they can be heard the cameraman to not to capture the scene as it will be a disgrace to the name of Pakistan if such news of Killing of Civilians is exposed.

Shouldn’t these Pakistani Journalists be questioned? What is the moral of Journalism profession? They create a delusion about some non-important acts in a neighboring country, while hiding the Gross Human Rights Abuses in their own country?

A rights organization, Baloch Human Rights Organization (BHRO) has published a report about the continues human rights violations in the region. BHRO report says: “the humanitarian situation in Balochistan continues to deteriorate. Policies of security establishment have made Balochistan a slaughter house for the people of Balochistan. Moreover, the government continues to shield forces action while the incompetency of Ministry of Human Rights prevails.”

A Baloch woman standing outside the UN Human Rights Conference near the Broken Chair camp said, “We are proud that we are a civilized culture. Sindhi, Baloch Pashtun are civilized people. We have a history that we don’t occupy other’s lands and rape their women and daughters and sisters. We have history that we have protected the dignity of others and given our lives for protecting the respect and dignity of others. We are not ashamed of it. If we are not proud, we are also not ashamed.”

She further said, “International Organizations like UN are maybe more helpless than us. Because if UN was not helpless it would not have questioned Baloch, Sindh and Pashtuns on the question of Independence, Rather UN should have raised questions on War Crimes being committed by Pakistan Army and stopped them.  Baloch Missing persons issue. Our 8 Years old kids, 6 months old kids, our women are being abducted, UN should have discussed that, but we think UN is more helpless than us.”

“We can stand on roadside and can get a protest recorded. But International Human Rights Organizations under UN cannot even do that for the suppressed nations.”

She blamed UK for all the mess created in the region. She said, “Britain made this daemon called Pakistan and imposed on Pashtuns, Baloch and Sindhis. Britain is also equally responsible for all the atrocities on our people. Britain should ask for forgiveness for getting our generations killed by hands of Pakistan Army. The mistake Britain did for making Pakistan, that mistake should be fixed. We are fighting for our Independence and our last generations will take this fight forward. We don’t need anything less than Complete Freedom from Pakistan at this moment.”

Without UN intervention Pakistan will continue its bloodbath in Balochistan: BNM

The chairman of Baloch National Movement Khalil Baloch in a statement on the 42th session of the UNHRC Human Rights Council in Geneva said that the UN and its affiliated organizations need to act practically on the humanitarian crisis of Balochistan. Because Pakistan is clearly committing war crimes and genocide in Balochistan.

Chairman Khalil Baloch said the main purpose of the formation of the United Nations and its agencies is to protect the human sanctity from violation, but criminal negligence on the issue of Balochistan has become a question mark on the existence of these institutions.

It is impossible to protect human sanctity on the basis of mere discussions in the annual session of United Nations.

He said that Pakistan’s barbarism has reached its peak in Balochistan. Humanity is being trampled on daily basis. Pakistan started the Baloch genocide soon after the occupation of Balochistan which has continued with intensity and has now reached its pinnacle. Pakistan has no regard for international laws and regulations.

The UN Human Rights council session is taking place on such an occasion, when the sufferings of Baloch nation has reached the highest point of its history:  villages are being erased; thousands of people have been killed, and thousands are facing the brutality in Pakistan’s torture cells. Until now these international institutions have not taken any action.

Chairman Khalil Baloch said that the main aim of the establishment of the UN was to solve the problems of nations. Similarly, the problem of Balochistan is a national issue. Therefore, the atrocities of Pakistan and the Baloch genocide demand intervention from global institutions. Pakistan’s promotion and out sourcing of terrorism, using religious extremism as a weapon and the historically worst barbarism in Bangladesh prove that international intervention is the only way to save humanity in Balochistan.

Untill and unless the UN and international organizations intervene on the issue of Balochistan, the blood of Baloch, including the Sindhi, and the Pashtun will continue to be spilled. The extent of brutality in Balochistan is more severe than the way Pakistan had inflicted cruelty on the Bengali nation.

He said that Pakistan is not only committing genocide and war crimes against the Baloch, Sindhi, Pakhtoon and other oppressed nations, but also is responsible for the bloodshed in the whole region. Pakistan has bathed the whole region with blood. The spread of terrorism in all neighboring countries and around the world is part of Pakistani fundamental policies and would never withdraw from that. If the international community continues to show similar negligence towards Pakistan for its own interests, the debt of humanity will burden them more.

Chairman Khalil said that UN Human Rights Council, during 42nd session should announce clear agenda on the humanitarian crisis in Balochistan. So that, not only stop the genocide of the Baloch nation by Pakistan but secure the peace of this region and the world while getting rid of the demon Pakistan.

Collective punishment is continuously being used in Balochistan: BNM

Spokesman of Baloch National Movement said in a statement to the media that the Pakistani army is targeting people in the worst mass executions in Jhao area of ​​Awaran district. In the latest wave of operations, hundreds of people have been detained, shifted to military camps and torture cells in the past four days, where they are being inhumanely tortured. Some of them have later been released and are in very critical conditions.

The spokesman said that most of the areas of Jhao; Gazzi, Sawadan, Kareem Goth, Dumb Gazzi, Mulla Gazzi, Kooto, Sistagan, Malan, Bagari Zeelag and Baag are suffering from this military barbarism. Due to ongoing operation and barbarities, the routine life is suspended. Transport is non-existential, houses and shops are out of stocks. Those who are wounded due to military violence,  receiving no medical aid. On the other hand, operations are being intensified, and fresh troops are arriving in the area. The army has created a blockade denying access and exit from the area of Jahoo.

The spokesman said that an undeclared curfew was imposed in Jahoo. The occupying army had blocked all transit routes, the occupying army is creating a new history of brutality in the area. It was for the first time that all the people of such a large area had been detained and transferred to the camps. People had been dumped inhumanly like cattle into army trucks and shifted to military camps, where they are being tortured day and night.

Some of them had been released after the inhuman torture due to shortage of space in the military camp.

He said that due to undeclared curfew and the ongoing brutalities, the injured are being provided unprofessional medical services on a self-help basis. Today, those who were released from various areas including Bagadi Zeelag were injured, Mohammed Hassan s/o Sher Mohammad, Imtiaz s/o Eid Mohammed, Sawali s/o Khair Bakhsh, Abdul Qadeer s/o Waleed, Shakeel Ahmed so Dil Murad, Juma s/o Dil Murad, Sabzal s/o Rozi, Mohammad Hayat s/o Naik Mohammad are still an unconsciousness state. Apart from this another estimated hundreds of people are facing brutalities in the camps. Many of them suffered severe injuries as broken legs and limbs and suffered serious head injuries. If the blockade of the area remains in place people many may lose their lives.

Baloch National Movement spokesperson said that the recent wave of brutalities of Pakistan is part of its horrendous policy of collective punishment. Pakistan believes that with state terrorism, it would prevent the Baloch nation from supporting and joining the national movement but history proves in the war of vice and virtue, it seems impossible either to destroy or defeat a nation that stood on the right path.

As the day passes more and more people are coming out with more information from Balochistan.

Baloch Leader Mehran Marri slammed Pakistan for crying out loud on Indian Kashmir even as it is committing Human Rights Abuses in Balochistan. He asked Pakistan should manage its own affairs first rather than interfering in its neighbor’s Internal Affairs.

“Pakistan is crying out loud for what’s happening in Kashmir, whereas it is not its business. It is India’s internal affair. I think International Community should make understand that point. That it is sovereignty issue of India, and Pakistan should manage its own affairs, rather than interfering in its neighbors’ affairs.”

Levies forces kill a youth due to extortion

Levies personnel shot dead a man for not paying them money.

According to details, Asif Sajdi, son of Dr. Allah Dad Sajdi, was driving to Karachi from Turbat city of Balochistan. He was stopped on a levies check post for extortion money. Asif paid 1000 rupees instead of demanded money and left. Levies forces opened fire on his vehicle which killed the young man.

As per the reports, Levies and Police are involved in extortion in various cities of Balochistan. Forces demand money from vehicle owners passing their check posts. Videos of such incidents have also been surfaced on media

More people continue to be abducted by Pakistan Army

In another news, four persons were forcefully abducted reportedly by Pakistan army from District Kech and Gwadar.

According to details, security forces and intelligence services whisked away two young men from Dasht-Sholi area of Gwadar.

The youngsters were abducted while repairing their car in a garage.