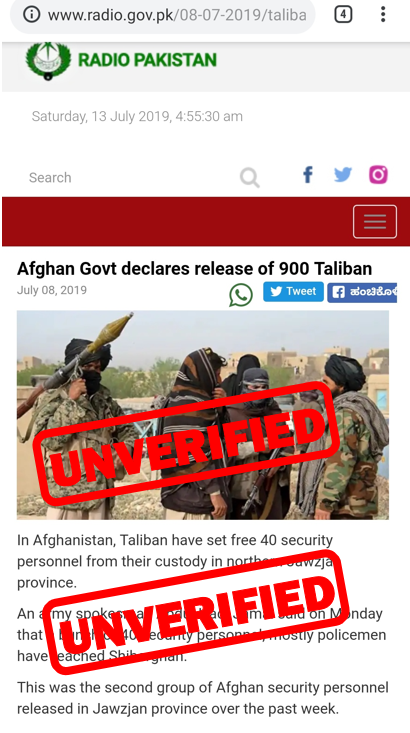 A news appeared on various news websites including radio.gov.pk, Economic Times and a couple of Chinese websites today with the headlines “Afghan Govt declares release of 900 Taliban.” or “Taliban sets free 40 Afghan security personnel” Here is a list of websites we checked. All the websites reported the exact copy of the same news item with the same content verbatim.

It should be noted that in all the above websites there is a para added at the end that reads:-
“The Afghan government also announced the release of some 900 militants languishing in prisons, about one month ago as a good will gesture to accelerate the ongoing peace process and national reconciliation in the conflict-battered country”

Based on that last para, Pakistan official website changed the title cleverly to “Afghan Govt declares release of 900 Taliban”

In order to verify the veracity of the news whether any such agreement is reached between Afghan Government, that is fighting Taliban Terrorists on a daily basis, to release 900 Taliban from its prisons as part of the peace process talks taking place at Doha in UAE? Our source in Afghanistan checked with Government officials and told that even the Government of Afghanistan has no information on any such agreement where 900 Taliban Terrorists will be released in exchange of Afghan soldiers. They completely expressed their ignorance.

When we told him that we came to know from Pakistan Website and the same news is published on the Chinese as well As Indian News websites, he was surprised and was shocked to hear that. He told it can be Pakistan’s DG ISPR controlled fake propaganda. He told that it exposes Pakistan’s controlled media nexus with international media including the Chinese and the Indian. He told not to believe anything until it is from the Official Afghanistan sources.

We asked another source in Afghanistan about the same. He asked, “How did the Pakistani, Indian and Chinese websites posted such unverified news about the release of 900 Taliban Terrorists? Did they verify from the Afghanistan Government? Or did they posted the news based on the Pakistan official ISPR Fake news as part of a propaganda?”

It should be noted that in the past Pakistan media has reported a lot of lies. The recent one where the Pakistan Media said that Imran Khan is supposed to meet Russian President Vladimir Putin on the sidelines of “Eastern Economic Forum” in Vladivostok.

However, Russia immediately clarified that Pakistan Prime Minister Imran Khan has not been extended invitation for the Eastern Economic Forum which will happen in the far eastern Russian port city of Vladivostok.

One of the Afghanistan’s local source we contacted told that there were many similar instances where Pakistan Official DG ISPR is known to peddle lies. He also told that until Afghanistan Official sources confirm, we treat this News reported in different Media sites as unconfirmed and unverified. It is more of another malicious propaganda carried out by Pakistan DG ISPR. He told that the International media should act responsible and instead of falling prey to Pakistan lies, they should wait for confirming it from the Afghanistan Government sources.

Another Afghan, we spoke with questioned the international Media. He asked, “Why does International Media believe Pakistan DG ISPR controlled puppet media which is known to spread disinformation? Why didn’t International media including the Chinese and Indian Media wait for the official announcement or confirmation from Afghanistan Government?”

“Is this not a part of Pakistan Propaganda to put pressure on Afghanistan Government? What will happen if the Pakistan media is spreading lies and the same is relayed by the international media? What happens if it turns out to be a lie and a Fake News?”

He questioned us, “why would Afghanistan Government release 900 Taliban Terrorists, who are responsible for killing thousands of civilians and security forces in Pakistan, in exchange of 40 Afghan Soldiers?” He told us to wait for the confirmation from the Afghanistan official sources and not become a part of Pakistan media Fake Propaganda in spreading lies.