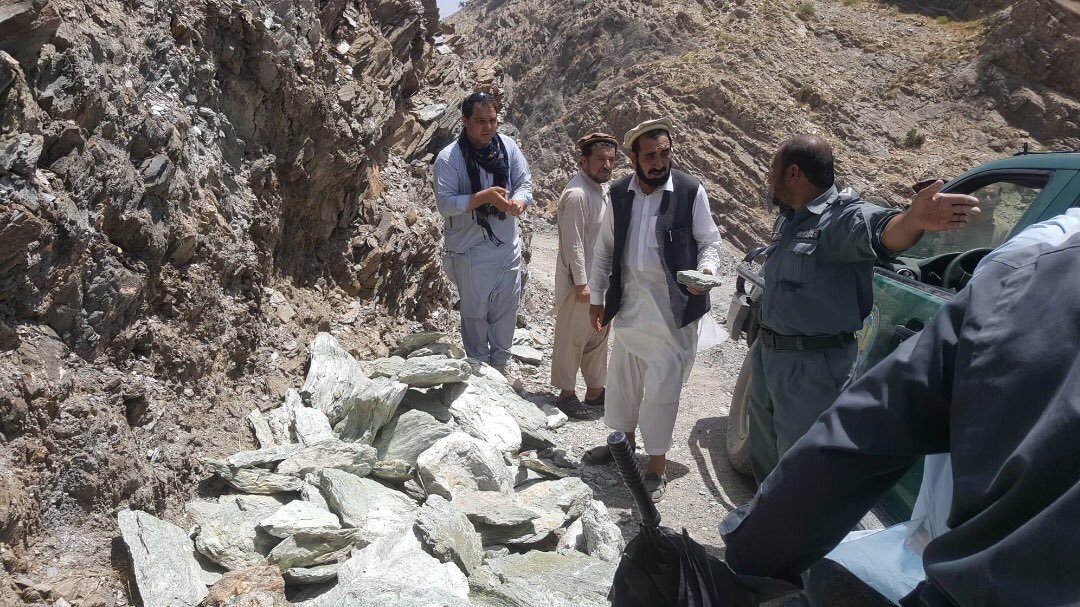 Recently Afghanistan Army raided a Nephrite Mine in a far-flung area and freed it from Taliban Control. Taliban Terrorists were controlling the illegal mining activity and smuggling Nephrite to Pakistan. Once the crude stone reaches Pakistan, the stone is processed, cut and carved and later on exported to US, Europe and China. This was a big revenue source for Taliban Terrorists for strengthening their Terror infrastructure in Afghanistan.

Nephrite is a variety of the calcium, magnesium and iron-rich amphibole minerals.  It is one of two different mineral species called jade. Nephrite jade is an ornamental stone used in carvings, beads, or cabochon cut gemstones. Nephrite is also widely used in China for its healing properties.

However, this recent raid by Afghanistan Army on the Nephrite Mine and taking control of the mine from Taliban, put the focus on a plethora of sources of Terrorist Taliban revenue. As per an expert, there are different sources of revenue for Taliban that is allowing them to procure sophisticated arms and abundant supply of ammunition and explosives. How does Taliban finance their Terror activities? How does Taliban keep on sending suicide bombers and terrorists to kill innocent civilians? Why does Taliban Terrorists want to take control of parts of Afghanistan that are remote with barren land and without any human life sustaining resources like water?

As per the expert, the Taliban’s increased footprint in Afghanistan and formalized their role in the mining sector by creating the Dabaro Comisyoon, or “Stones Commission.” It substantially enhanced their war chest. The Commission manages the taxation of extracted minerals and ores and even issues ‘official’ Taliban sanctioned mining licenses. The Dabaro Comisyoon operates under the authority of the Taliban’s Maali Comisyoon (“Financial Commission”) and reportedly came into existence around 2009 as the Taliban began to experiment in diversifying their revenue streams. The Maali Comisyoon oversees and manages the financial flow of many of the Taliban’s illicit revenue streams, including mining activities, kidnapping for ransom, and extorting NGOs.

The Afghanistan Anti-Corruption Network (AACN) reported in February 2017 that ISIS-KP and the Taliban earned $46 million in 2016 from illegally extracting talc, a soft mineral used in the manufacturing of cosmetics, from Nangarhar’s Khogyani District.

The Taliban are now involved in the illegal extraction of minerals, ores, and precious and semi-precious stones, and they reportedly own several mining and excavation businesses in southern Afghanistan.

Taliban were reported, by the Afghan government envoy to Helmand in June 2016, to earn between $50,000 and $60,000 per day ($18.5 million and $21.9 million per year) from mining and transporting marble in the province.  In addition, they were estimated to make as much as $16 million from unlicensed ruby extraction in Kabul as early as 2014 and $6 million in 2016 from mining the gemstone lapis lazuli in Badakhshan Province. While those approximations pertain to only three provinces, one Afghan expert on the extractives industry assessed that out of the estimated $2 billion generated overall each year from Afghan mining operations, the Taliban currently stand to earn 10 to 15 percent, or $200 to $300 million per annum.

By contrast, the Afghan government reportedly earned only $30 million from mining revenues in 2015, a paltry sum compared to the current estimated revenues of the Taliban from mining

US ending combat mission and its implications

The United States formally ended its combat mission in Afghanistan at the end of 2014. The NATO mission in Afghanistan was renamed Resolute Support and focused on training, advising, and assisting the Afghan National Security Defense Forces (ANDSF), which, at that point, assumed responsibility for all security operations. Since the transition, the Taliban have continued to make territorial gains throughout the country and deeply involved itself in the illegal mining activities.

Local media and sources in 2016 identified at least 1,400 illegal mining sites located in at least 14 of Afghanistan’s 34 provinces—710 of which are in the Kabul area alone—that are exploited by the Taliban and other Terrorist organizations. Overall, there are some 10,000 mineral deposits reportedly located in areas outside of the government’s control. In June 2016, a spokesman for the Afghan Ministry of Interior acknowledged the challenges associated with illegal mining activities and claimed that the Afghan government had stopped 1,270 illegal mining operations. However, no evidence was provided as to when and where those illegal mining operations had been disrupted and how many mines are still under Taliban control.

As per the locals, the Taliban charge a tax for each truck used to transport the mined stones, and depending on the type of marble being transported, the tax ranges from 25,000 Pakistani rupees to 60,000 Pakistani rupees per ton. Trucks can carry between 7 and 40 tons each, depending on the type of vehicle. The U.N. Analytical Support and Sanctions Monitoring Team reported in 2015 that between 2008 and 2014, mining operations extracted 124,000 to 155,000 tons of marble from Helmand each year.

Sources in Helmand also estimated that around 80-100 trucks are used to smuggle hundreds of tons of marble from Helmand into Pakistan every day, while only two percent of Helmand’s extracted marble end up in Lashkar Gah, the provincial capital, where the marble is further processed and sold. Of the meager two percent of marble that remains in Afghanistan, the government is only able to tax 3,500 afghanis per ton. These activites are another big revenue sources for Taliban in Afghanistan.

The Dabaro Comisyoon is also tasked with managing the revenues earned from taxing mining companies and those tasked with transporting the stones throughout the country (and not only in Helmand Province). It also maintains relations with Pakistani businessmen who help facilitate the black-market sale of Afghanistan’s illegally excavated natural resources. In this way Pakistan also makes Billions per year by partnering with Taliban Terrorists. These Billions of Dollars earned by Pakistan by processing and exporting illegally obtained natural resources and precious stones are then used to further strengthen their Terror Infrastructure.

Illegal Mining of Nephrite Near Kabul

Illegal and unregulated mining activities are not only restricted to isolated rural areas outside the Afghanistan government’s control. The village of Nili, located in Parwan Province—approximately 25 miles from Kabul City and 12 miles from the U.S. base at Bagram Airfield—is reportedly a hub for the illegal mining of nephrite jade, a decorative stone used in ornaments and jewelry. Taliban Terrorists controlled mining operations in Nili for most of 2016. The jade is trafficked through the mountains by mules until it reaches Sarobi District, Kabul Province, where it is then transferred to trucks and transported farther east to markets in Pakistan.

Sarobi itself is also illegally exploited for its precious stones, mostly rubies. Taliban Terrorists have controlled a mountainous area near the village of Jegdalek in Sarobi District since 2012. Reports emerged that the Taliban had coerced locals to illegally mine the mountains for rubies. One such high-quality ruby extracted there allegedly sold for $600,000 to a buyer in Dubai, UAE. Despite an Afghan security operation codenamed “Iron Triangle” that successfully routed Terrorists from several parts of Sarobi in 2015, the illegal extraction and smuggling of rubies from Sarobi continued unabated in 2016. Most of the precious stones illegally extracted from mines in Kabul are smuggled to Peshawar, Pakistan; the rubies are typically sorted for quality and sold in the gem stalls of Peshawar’s Namak Mandi market. These are big Taliban revenue sources in Afghanistan.

This is how FATF Grey Listed Pakistan is a part of a big network of exploiting natural resources and precious stones illegally from the mines located in Afghanistan. Pakistan pays a meagre amount for these precious resources, but then refines them and sells them at exorbitant prices to buyers around the world.

Narcotics as source of Revenue for Taliban

In the southern province of Helmand, since 2014, the illegal cultivation, processing, and trafficking of narcotics has remained a critical financial resource for the Taliban. The Taliban dominate many aspects of Helmand’s thriving, multi-billion narcotics industry, which revolves around the illicit cultivation of poppy, which, in turn, is used to produce opium and refined heroin as well as the cultivation of cannabis. This is used to create hashish, a potent marijuana resin. The U.N. estimates that the Taliban earned $400 million from the narcotics industry in 2016.

We spoke with one of the Afghan nationals. He believed that Afghanistan Government and Afghanistan Army needs to take control of all the illegal mines. They should stop the illegal activities to plunge all Taliban revenue sources in Afghanistan that fund the Taliban Terrorists besides that also fund the FATF Grey Listed Pakistan. He suggested that, to start with, confiscate all the trucks involved in illegal smuggling of Natural resources and precious stones from Afghanistan to Pakistan. He also suggested to increase border patrols and start border surveillance using drones to stop illegal smuggling of Afghanistan resources to Pakistan. Until this is done, Taliban Terrorists will continue to earn millions of dollars. They will continue sending their Terrorists to spread fear among the Afghan civilians.