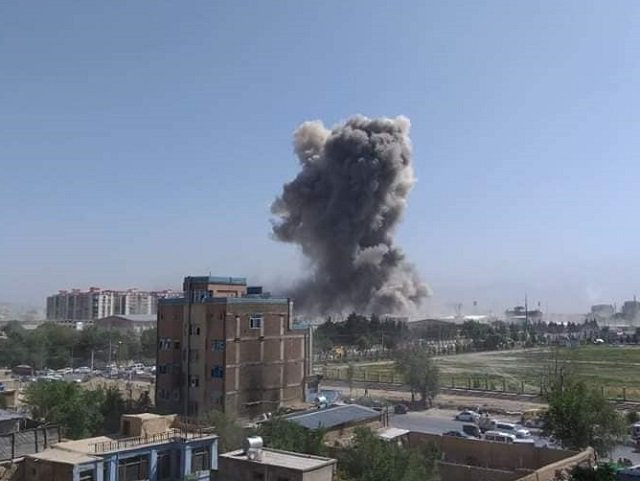 The bomb went off during the morning rush hour in Kabul when the streets were filled with people, injuring 105 people, including 51 children and five women, government authorities said on Monday.

As per the eye witnesses, the bomb-laden truck exploded outside a defence ministry building.

As per another eye witness, after the blast, five Taliban Terrorists then ran into a nearby high-rise located near the ministry’s engineering and logistics department located in a crowded market and began firing indiscriminately down on the ministry. Police and special Afghan security forces poured into the area and cordoned it off. There was a gun battle that lasted more than eight hours. All five Taliban Terrorists were killed by Afghanistan Army and NDS. Casualties figures of security forces is not known.

Afghan President Ashraf Ghani has condemned the attack, calling it a crime against humanity.

“Clashes ended with the death of all five attackers,” said interior ministry spokesman Nasrat Rahimi, adding that more than 210 people were rescued during the operation.

Social media was filled with pictures of injured school children who were being taken to the hospitals. These pictures were heart wrenching. These show that the barbaric Islamist Radical Islamist Pakistan supported Taliban Terrorists do no care for even small children.

Negotiators from the US and the Taliban began a seventh round of peace talks on Saturday in Doha, Qatar. Talks stretched into a third day. Taliban is adamant on getting an announcement of a timetable for the withdrawal of the U.S> and NATO troops from Afghanistan within 6 months. However US wants the troops to be stationed for 18 months and a guarantees that the Taliban won’t allow terrorist groups to operate in Afghanistan again.

President Ashraf Ghani had visited Pakistan yesterday to ask for direct talks with Taliban Terrorists leadership that is in FATF Grey Listed Pakistan. However, Taliban have refused to hold talks with the Afghan government, calling it a U.S. puppet, and have continued to carry out daily Terrorist attacks on Afghan civilians and forces. Present Terrorist attack is being seen as a response by Pakistan supported Taliban Terrorists to the visit of Afghan President Ashraf Ghani.

But there are fears, including among Afghan women, that any deal with the Taliban Terrorists could eventually see the militants sweep back into power and strip away rights and freedoms gained since they were toppled in 2001. People on the ground recall the horrors they had to endure during horrific Taliban rule that ended in 2001. Women were the worst affected during Taliban Rule. People on the ground say they are ready to fight for their liberty to the last breath than to give away their freedom to Islamist Radical Taliban Terrorists.

Meanwhile in the USA, people are of the opinion that US wants to leave Afghanistan due to US Soldiers lives lost at the hands of Pakistan supported Taliban Terrorists.