Anti-Hindu Riots in New Delhi were Planned in Nepal. 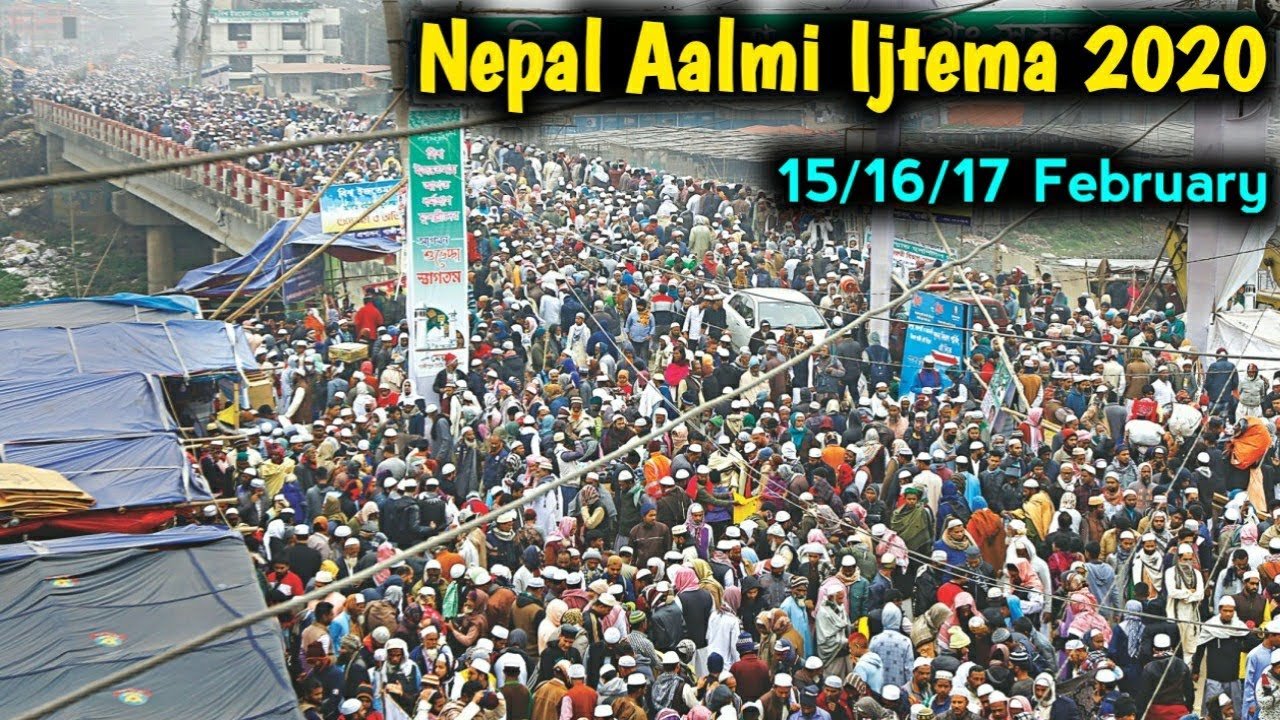 Anti-Hindu Riots in New Delhi during President Trump Visit were Planned in Nepal during Nepal Aalmi Ijtema 2020 held between 15 to 17 February 2020.

On 15-17 February “Muslim Aalmi Tablighi Ijtema” was organized in Saptari District of Nepal. In this event they planned Delhi Riots on day when president Trump will be in Delhi, as authorities cannot give shoot at sight orders.

Around 5 lakh Muslims gathered in this Ijtema, mostly from UP and Delhi. This event was inaugurated by Hazrat Maulana Shah who is from Delhi.

Ijtema is an Islamic congregation organised by Islamic organisations in association with millions of Muslims. Participation in Ijtema increases religious authority, status and empowerment, and contributes on the Muslim identity through the idea of brotherhood and ummah.

1. Tabligh is the branch in Islam that considers that there is one God. It also considers that Prophet Mohammad was a Man who was doing God’s work as he was chosen for it.

3. Tabligh wants all Muslims to follow the words of the great prophet and be an example for others.

4. Earlier Tabligh was known as ‘informing’. All Muslims, including the Shais and Sunnis had to follow Tabligh.

5. The Sunnis also accepted the first four caliphs as the rightful successors of Prophet Muhammad.

6. Sunnis form the largest group of Islams in the world.

Fact is Tabligh Jamaat runs over 80% Mosques in North India and they are mostly Sunnis. Hence Tabligh Aalmi ijtema is popular among Sunni muslims. Majority Shia Muslims stay away from such congregations of Sunnis/Tabligh.

The ijtema that was supposed to be an annual event is seen very frequently across South Asia. We were baffled if Ijtema still means annual congregation?

Here are a few Dates of Tablighi Ijtemas:-

Does the above dates ring any bells? With lakhs of Muslims gathering on one place, doesn’t it ring any alarm bells?

All the above places experienced heightened Anti-CAA Protests by Muslims within a short period of these Ijtemas. Muslims find their strength in large numbers in ummah. This strength is exploited by opportunist Leftist Liberal Political Parties for their political gain. Google the above cities and search for Anti-CAA protests and you will see the Leftist Liberal Congress Party misusing this collective strength of Muslims and brainwashing them. One such example is mass protests by Muslims in Bhopal organized by the ruling Leftist Liberal Congress Party in the state.

The Religious congregation of Ijtema was supposed to be only related to spreading religious knowledge to Muslims and making them better human beings but with the changing times, such Ijtema are misused by vested interests to spread hate and their Anti-India Agenda. Even though such statements may not be made from the main podium, side speeches calling for boycott of Hindus and their financial boycott, getting on the streets, showing resistance against Indian government are responsible for thousands of Muslims coming on streets for protests and indulge in stone pelting, using guns, using home made bombs and what not. These are nothing short of waging war against Indian Nation.

What happened in Nepal?

Over 5 Lakh Aalmi Ijtema gathered between 15th – 17th February 2020 in Bodebarsain, Saptari for a three-day Islamic congregation, Aalmi Tablighi Ijtima, in Nepal. Satari is a small city in Nepal Bordaring Indian State of Bihar and is very close to Kishan Ganj Area known as Chicken Neck Area. This Religious Congregation which was supposed to be for Muslims of India and Nepal was attended by Sunni Muslim participants even from countries such as Pakistan, Saudi Arabia, Malaysia, Kuwait, Qatar and Bangladesh.

The government on Thursday 13-February 2020, had directed the local administration to ban the programme, citing its concern over preparations to allow participants from countries other than India. However, at the behest of the National Muslim Commission the government had agreed to give a go-ahead with the scheduled programme after the organiser ensured that Muslims from countries except India wouldn’t be allowed in the event.

As per Intelligence Sources, the Ijtema in Nepal was also attended by Bangladeshi Muslims from neighboring Kishan Ganj (Chicken Neck Area) in India. Taking advantage of the situation, Pakistan Intelligence Agency operatives present in Nepal hatched this plan with representative Muslims from Delhi to get on the street and cause a major disruption in Delhi as US President Donald Trump will be visiting Delhi and the International Leftist Liberal Media will focus its attention to Delhi.

However the situation was dealt by Modi Government differently. Whole world saw how Radical Islamists burnt Hindu houses, Killed Hindus in Delhi, targeted Indian Intelligence Bureau officer Ankit Sharma and gave him more than 400 sharp cuts, poured acid on his wounds, Hindu girls were paraded naked, A Police Constable was killed by Muslim mobs, a Deputy Commissioner of Police was grievously hurt by females who hit his head with Iron Rods. A local Muslim Politician used his house to throw Petrol Bomb Cannons using big sized slingshots mounted on rooftops and handcarts to inflict maximum damage on Hindus. It was only after President Trump Left India, Police was given shoot at sight orders. Although the International Leftist Liberal Main stream Media showcased losses only to Muslims, there were some Local Media houses that exposed the truth that it was Hindus who are the real victims of Muslim violence.

Nepal’s agencies have identified four routes that were being used to sneak counterfeit Indian money in India. The identified routes are Karachi-Doha-Kathmandu, Pakistan-Oman-Kathmandu, Bangkok-Kathmandu and Singapore-Kathmandu, said the people.

Nepal police arrested two other Pakistani nationals — Mohsin Khan, 32, and Puja Mohshin Khan, 31 — from Bhaktapur and they are being interrogated. The duo hailed from Islamabad. Indian security establishment has also noticed an increase in the presence of ISIbacked groups along Nepal’s borders with India over the past few months, according to officials.

As per another news article published Tablighi Jamaat in Britain splits sharply in two factions https://www.thenews.com.pk/latest/354706-tablighi-jamaat-in-britain-splits-sharply-in-two-factions

The Islamic missionary and reformist movement called Tablighi Jamaat has split into two groups in Britain with one faction following Raiwind Markaz while the other is following Moulana Saad of Nizam-ud-Din in India.

These differences started in 2015 when the advisory committee – or shoora – was formed to deal with all important matters including international congregations (also known as aalmi Ijtama).

That means now 2 different Groups of Tablighi Jamaat that constitute maximum Sunni Muslims are competing against each other for spreading their speare of influence in Indian Subcontinent. The Ijtema that was supposed to be an annual congregation is happening almost every month in every City of India. A crowd of Radical Sunni Muslims from 2 Lakh to 5 Lakh Gather on each of these Ijtemas. There is competition among the both groups to control more and more Sunnis. Though the objective of these ijtema is to make Muslims better persons and return to the path shown by Mohammad, but the Radical elements in Sunni Muslims steel the show and on the sidelines of these religious gatherings incite the local Muslims and the local leadership for action against Indian state.

Was it only Planning or were the plans conveyed to the people in Delhi to come on Streets?

It is no coincidence that rioting also happened in Gujarat and Uttar Pradesh on the same day President Donald Trump visited those states.

On 17 February evening, Umer Khalid asked Muslims to hit the street. And bow down law and order.

Umar Khalid’s conveyed the above planning and decisions taken during the Nepal Ijtema in his speech at Amravati on February 17. He told the gathered people that while the PM takes Donald Trump to see the development in Gujarat, the people should take to the streets to ‘show’ the visiting US president that the people of India are fighting against the ruling party of India.

Khalid invoked the false narratives of ‘targeted mob lynching’ against Muslims, then goes on to say that when the Muslims did not revolt against the Ayodhya judgement by Supreme Court, the government took it for granted that they can bring any law against Muslims.

Whatever was planned during Ijtema in Nepal by Pakistan ISI and some Radical Islamic Leaders from India, Umar worded the decision at the gathering in Amravati the same day i.e. on 17 February a week before the arrival of US President Trump in India.

Besides that as a reminder social media especially Twitter was flooded with several Muslim twitter accounts calling for Muslim citizen must be on roads for protests during President Trump’s visit to India. Placards should appear from the airport itself with #GoBackTrump written on it. We covered it in details in our previous article Leftist Liberals & Jihadists Planning Disruption During Trump Visit To India

Here are some of the future Events that are planned for one of the Ijtema.

What is the intention behind creating Riots by Muslims all over India although Muslims are not in Majority? Who is benefitting by these riots? Who will be at loss if there is peace in India and India becomes an Economic Super Power in next few years? If you got the answers to these questions you will understand the situation. We will cover these questions in our next article. How would Muslim Religious dispel the fear of Hindus that such large congregations or Ijtemas wll not be used for raising Anti-Indian or Anti-Hindu sentiments among the Sunni Muslims? Will Muslim Leaders work with Indian Government and spread the truth among Muslim community and that they are being misused by vested interests to bring down Economic Growth in India which inturn will impact Muslims as well as they are also part of India? Will such Ijtema organizers work with Indian Government and will work for raising the standard of all Indians belonging to all religions rather than focusing only on Muslims?