Protests In Pakistan Against US and Israel on Soleimani’s Killing 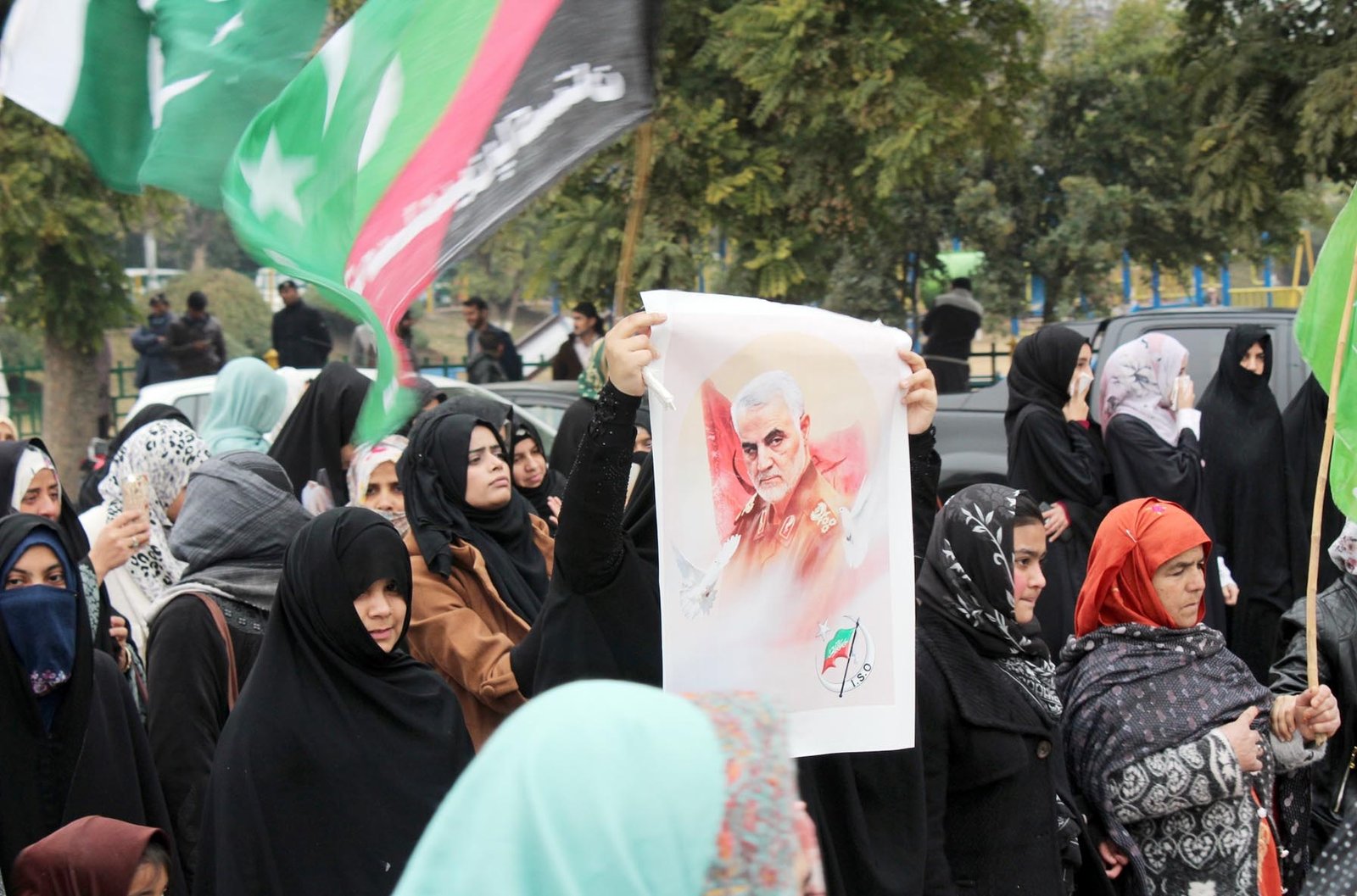 Shia organisations held a Protests rally in Karachi Pakistan on Sunday 5-January 2020, against the killing of Qasem Soleimani, an Iranian general and the chief of the IRGC’s Quds Force, and Abu Mahdi al-Muhandis, a leader of Hashd al-Shaabi.

In Karachi, Majlis Wahdatul Muslimeen (MWM), Imamia Students Organisation (ISO) and other religious and political groups held a rally that began at 3 pm at the Fawwara Chowk and marched towards the US Consulate in the city. The protesters carried portraits of the slain general along with posters inscribed with “Down With USA!”

Addressing the protesters, Allama Shahenshah Hussain of the Shia Ulema Council, said that a small group would go forward to the consulate premises and present a memorandum.

Hussain, in his address, appreciated the statement by Inter-Services Public Relations (ISPR) Director General Major General Asif Ghafoor who had assured the nation that Pakistan’s land will not be used for action against any neighbouring country.

MWM chief Allama Hasan Zafar Naqvi also addressed the rally. “Every Pakistani, down to the last child, is Qasem Soleimani,” he declared. “We will not allow the US to succeed in perpetrating their crimes on Pakistani soil,” he added.

Paying homage to Soleimani, he said that the slain general had united Iraq’s Shia and Sunni populations against the US. He said the existence of America and Israel pose a danger to humanity. “Soleimani was the commander of the army of Islam,” he said. He also paid tribute to the Pakistan media for highlighting Soleimani’s role.

Stringent security measures were taken due to the protest rally. The roads leading to the US Consulate, including Moulvi Tameezuddin Khan Road, Mai Kolachi Bypass, Aiwan-e-Saddar road and Ziauddin Road in the red zone were closed by the city’s traffic police. The traffic police advised the commuters, from Tower to Boat Basin and PIDC to Tower, to use the I I Chundrigar Road for their travel.

The CM House was also barricaded by placing shipping containers.

Meanwhile, in Islamabad, a rally organised by the MWM and ISO, began at the Islamabad Press Club and culminated at the D-Chowk.

The rally was led by Allama Syed Ali Rizvi, a prominent Usuli Twelver Shia Scholar. He is the president of Majlis e Ulama e Shia (Europe), UK. The rally was attended by thousand of Islamist Radicals including women and children. Islamabad’s Deputy Mayor Zeeshan Naqvi also attended the rally.

Protester walked over the flags of Israel and the US that were put on the ground. Later they burnt Israeli and the US flags.

Protesters chanted “Death to America” and “America is a terrorist”.
Listen Americans, we are your death
Listen Isrealies, WE are your Death
Down with America, Down with Israel

One of the speakers said, “We are ready to go to Iran to fight alongside Iran. if Pakistan Government closes the border, we will think you have stopped the way to Karbala (holy city).”

Addressing the rally, Rizvi said that Soleimani had been “martyred by those who profit from Daesh and Al Qaeda”. He said that the US was a “cheating and untrustworthy” country. “The Islamic world’s security and dignity is in keeping its distance from them.”

“History bears witness that the US has left no stone unturned when it comes to harming the Muslim Ummah,” said Rizvi.

He said that the government will have to assure the people that Pakistan’s soil will not be used against neighboring Muslim countries like in the past. “The whole nation wishes to see itself freed from external pressure,” he added.

Two days back US Embassy in Islamabad, Pakistan and U. S. Consulate General Lahore, Pakistan had issued a Security Alert and told U.S. government personnel in Pakistan to postpone non-essential official movements and most personal movements. U.S. citizens in Pakistan should monitor their surroundings for possible demonstrations and suspicious activity.

Earlier a video circulated on the social media, Allama Syed Shehanshah Hussain Naqvi (a renowned Pakistani Twelver Shia scholar and a senior member of Shia Ulema Council) had given threat to the Pakistan Government to not let US led forces use Pakistan as a base to launch attacks on Iran. He had threatened that if Pakistan allows US forces, then they are ready and will target and attack US establishments in Pakistan.

He said the behavior of Pakistan Prime Minister is inexpedient, like a destitute, impoverished person. Maybe he doesnot know what he should do. Maybe he knows. As per our meetings, we would like to clarify, if Pakistan’s land is used against neighboring Islamic Nation, then Pakistan’s Sunni & Shia will not sit at home. It will be upon us to destroy American properties in Pakistan. We will like to warn Pakistan Army and the Security Forces.

DG ISPR said that the US Secretary of State Mike Pompeo had held telephonic discussions with the Pakistan Chief of Army Staff (COAS) on two points on January 3. Army Chief had also told him (Pompeo) to avoid such steps which could interrupt the Afghanistan reconciliation process. COAS has an important role in bringing improvements to the regional situation and Pakistan achieves peace targets after rendering many sacrifices.”

Pakistan’s provincial government in Sindh on Saturday issued a threat alert amid heightened tensions between United States (US) and Iran, following the assassination of top Iranian general Qasem Soleimani in Baghdad.

In a letter titled, “Enhancement of Security of American and Iranian Establishment/Installations” in the province, the Sindh Home Department requested the Director General Sindh Rangers, Inspector General Sindh and all the commissioners to increase the security citing tense situation in the region.

There was widespread hatred outrage among Shia Community in Pakistan. Coffins and US Flags were burnt at various places by the Shia Protesters.

Some of the images shared on Social Media by Pakistanis

However some of the Sunni Muslim handles in Pakistan wanted Pakistan to stay neutral and do not want to be drawn into any war for Iran. Sunni Muslims in Pakistan are opposing any efforts of the US to take any help of Pakistan in the eventuality of a war with Iran.