Soleimani’s Curse: Photos of a top Iranian general posing with fighters killed in Syria prove what a mess Iran’s got itself into 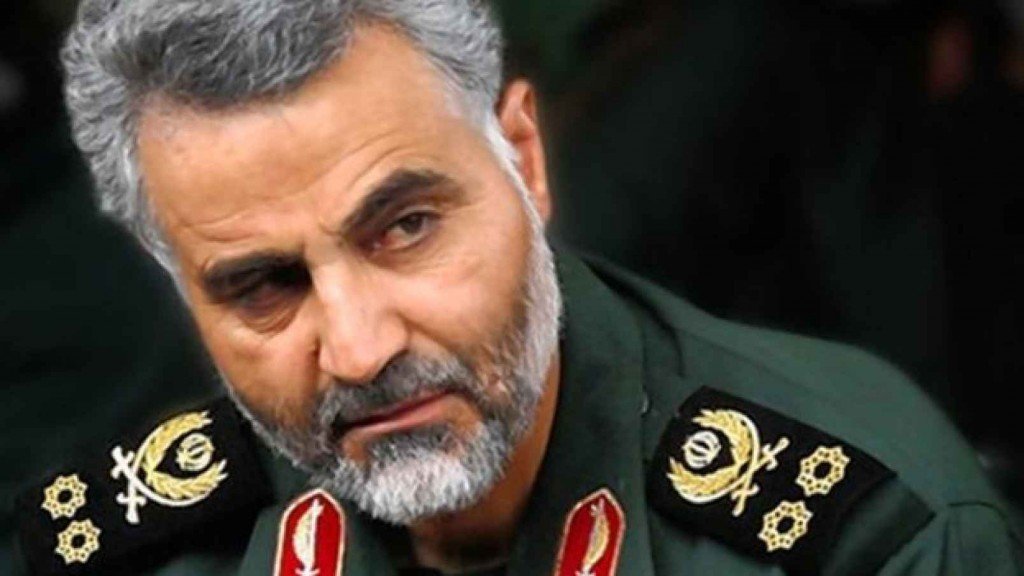 Not only are Iranian forces fighting and dying in Syria, a fact that is well reported by now, but a close look at the identities of some of the fallen shows just how severe the losses have become. A vivid, and previously unreported, indication of how truly stuck Iran may now be in the Syrian quagmire can be seen in the number of photographs of Iranian fighters who just happened to pose together with General Qassem Soleimani, and who just happen to now be dead.

The photos, taken at various times and locations, are all colored a rosy shade of esprit de corps, infused with the sense of optimism and confidence befitting a powerful military goliath. They show senior ranking members of the Iranian Revolutionary Guard Corps, as well as the Iran-backed Afghan Shia militia Fatemiyoun, Basij — Iran’s paramilitary volunteer militia, and Lebanon’s Hezbollah. In these snapshots, the fighters grin, seeming to bask in the light of the man beside them, a man who has recently emerged as his country’s most highly-celebrated military figure but killed now in US Air strikes.

Qassem Soleimani commands the IRGC Quds Force and was widely seen as the personification of Iran’s long arm. The Quds Force, considered the IRGC’s elite unit, is charged with operations outside Iran, and even beyond the Middle East. For supporters of the Iranian regime, Soleimani was a super star.

A very partial list of his major operations includes some significant milestones in recent years: He aided and armed the Iraqi militias that killed thousands of American soldiers in Iraq after 2003; he established Iraq’s Popular Mobilization Units who fight ISIS; and he was the commander and confidant of Hezbollah Chief of Staff Imad Mughniya (assassinated February 2008), who led Hezbollah attacks and kidnappings against IDF. Just recently, it was reported that he visited Moscow in order to show Vladimir Putin up-to-date maps of the battles in Syria in an effort to persuade the Russian Army to join the battles.

However, the many Iranian casualties in the Syrian battles have tarnished Qassem Soleimani’s achievements and sullied his reputation. This highly accomplished warrior now faces the battle of his life: to save the Assad regime. He has reportedly reduced the frequency of his visits to Iraq, where he commands the battles against ISIS, and now devotes most of his time to overseeing the battles in Syria.

Despite the fact that Iran continues to repeat its official position that it does not take part in the battles, facts and reports show that field soldiers and commanders are dying in the battles. In October alone, 32 Iranian army personnel were reported dead in battles in Syria, including officers ranked as high as general, in a ground attack initiated by Iran aimed at regaining territories Assad had lost. That casualty figure doesn’t include losses sustained by Iran’s proxies such as Lebanese Hezbollah the Afghan militia Fatemiyoun and other militias supported by IRGC, most notably Hassan Hussein al-Haj, chief of Hezbollah troops in Syria.

Supporters of the Iranian-led Resistance Front are not the only ones closely monitoring the progress, or lack thereof, of the battles in Syria especially those in Aleppo and Idlib. Opponents of the Iranian regime are also paying close attention to the battles in Syria. The photographs that link these losses to General Soleimani are a topic of discussion among the web-savvy anti-Iran crowd, who have dubbed the phenomenon “the curse of Soleimani.”

Finally Soleimani himself has now fallen victim to it, as his detractors on the social networks wished. In such a case, Iran may find that the gamble it took by joining in the battles in Syria was far more costly than it bargained for.

Here, then, is “the curse of Soleimani” as illustrated in the photos of those who died in the battles in Syria and elsewhere.

Qasem Soleimani (left) and Abu Mahdi al-Muhandis (right) were among those killed in the Air Strike.

ABOUT THE AUTHOR: Yossi Mansharof is a researcher of Shiite communities, born and living in Israel. He is currently completing a PhD thesis in the Middle Eastern History department at the University of Haifa, and is a researcher at the Ezri Center for Iran and Persian Gulf Studies. He worked (2006-2015) at the Iranian desk of the Middle East Media Research Institute (MEMRI).