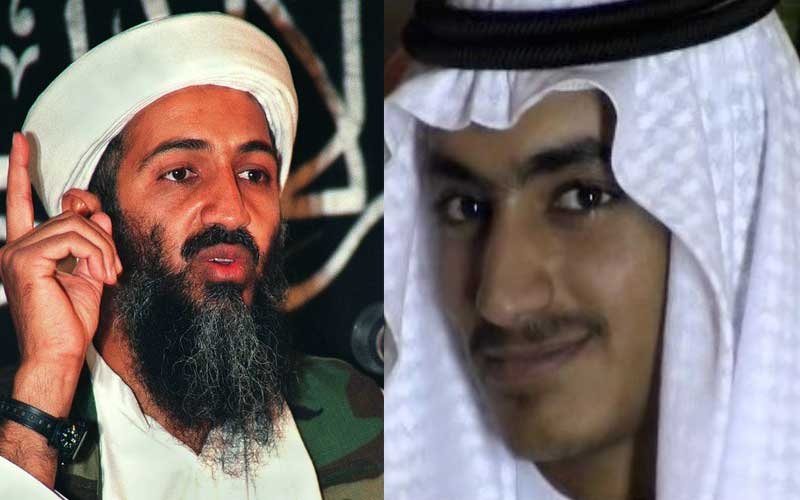 Earlier this year the US State Department called bin Laden, who is believed to be in his early 30s, an “emerging” leader in the terror group al Qaeda, offering a million-dollar reward for information leading to his capture.

The New York Times, citing two US officials, said “the United States government had a role in the operation that killed the younger Mr. bin Laden, but it was not clear precisely what that role was.”

Hamza, believed to be 30, was being groomed to be a next-generation leader of al Qaeda.

Hamza had appeared in al Qaeda propaganda videos since he was a child. In recent years, he also had started releasing statements that positioned himself as one of al Qaeda’s ideologues — for instance, Hamza released an audio statement in 2016 calling for unity among the jihadist militants fighting in Syria.

Earlier this year the US State Department announced a $1 million reward for information about Hamza.

Hamza was in the Pakistan Army Aviation Flight that crashed

As per unverified reports, Hamza was being escorted in the Pakistan Army Aviation Flight 2 days back. The flight took off from Islamabad Airport, Pakistan and was flying over Army Headquarters in Rawalpindi, Pakistan, before it nosedived in a residential area.

There are unverified reports that the US army collaborated with Afghans and brought down the Pakistan Army Aviation Plane. US had pin-pointed Intelligence that the Plane was carrying Osama Bin Laden’s Son, the Terrorist Heir Hamza.

Social Media was also abuzz with this news. One of the Twitter users, a respected and trusted name in Afghanistan, Shahid Quetta also Tweeted:-

I don’t know
I can’t confirm
I don’t believe
but
a reliable friend is insisting
that
Hamza Bin Ladin
son of
Osama Bin Ladin
was killed in the
Pakistan Army Jet crash
in Rawalpindi on
Tuesday 30 July!

We checked and noted that there were other social media users that were also talking of the same. If the unverified reports are true, it will be the first hint that the US is involved in this great, successful operation and eliminated an Al-Qaeda threat from the world.

It’s was unclear where, exactly, Hamza has been hiding out for all these years. As the New York Times notes:

The location of Mr. bin Laden had been the subject of public speculation. After the Sept. 11 attacks, he and other members of Al Qaeda fled to Iran, where they were detained. He was eventually allowed to leave Iran, then reportedly moved with his family to the Pakistan border region. At one point, intelligence showed that he had traveled to Syria in the past several years, former officials have said.

But if Hamza is truly dead, it is a big blow to al-Qaeda and creates a leadership vacuum. Hamza was a uniting factor for all Terrorist Organizations. With his being dead in Pakistan Aviation Crash (if the unconfirmed reports are correct), it will greatly help in eradicating terrorism from the Earth.

It raises a big question? Why was FATF Grey Listed Pakistan hiding Hamza? It should be noted that earlier Pakistan Army and Intelligence Agencies had also hidden the Terrorist Mastermind of 9/11 Osama Bin Laden near the Army area in Abbotabad. Does that prove that Pakistan is a haven for all the Most Wanted Terrorists in the world?

With the US hand in killing of Hamza, does that mean that Pakistan Army gave up Hamza in return for economic gains for its nearly bankrupt economy? Or is Pakistan still in denial mode that the Terrorist Heir, Osama Bin Laden’s Son Hamza was hiding in Pakistan?

If the unconfirmed, unverified reports of Hamza dying in Pakistan Army Aviation Aircraft crash are correct, Shouldn’t Pakistan be held accountable for hiding the Terrorist Leader’s Heir in Pakistan and be black listed under FATF?

There is a deafening silence in Pakistan Establishment on this crash. It also raises some serious questions over who was in the plane. As per earlier reports that poured in, it was already clear that there was someone valuable in that plane.

Major General Asif Gafoor, DG ISPR, who never misses an opportunity to tweet hasn’t referred to this incident till now.

On 30-July 2019, A Pakistan Army Aviation Aircraft that was alleged to be on routine training flight crashed near Mora Kalu, Rabi Plaza, Rawalpindi in the early hours of Tuesday Morning. All 5 onboard, including 2 Pilots and 3 crew members died in the plane crash.

The flight crash landed in a residential area and soon fire broke out that engulfed five houses, killing 13 civilians and injuring another 18 civilians. We covered it in our article Pakistan Army Aviation Aircraft Crashed. 17 Killed, 18 Injured.

The aircraft was a US made Beechcraft King Air 350 twin turboprop. This aircraft was operated by Pakistan Army Aviation as an electronic surveillance asset as well as carrying important personnel. The aircraft took a steep turn near its destination airport before coming down.

Rawalpindi, near the capital Islamabad, is the site of the Pakistani army’s headquarters, and the plane belonged to the Pakistani Army’s aviation unit.