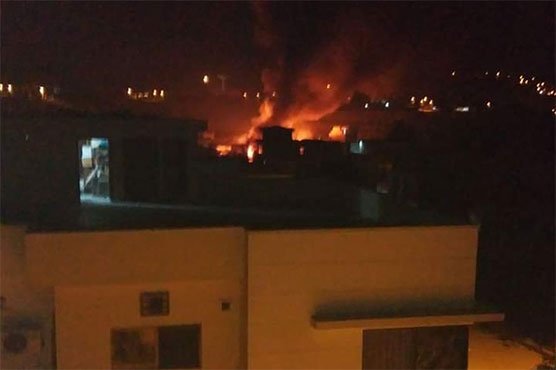 A Pakistan Army Aviation Aircraft that was alleged to be on routine training flight crashed near Mora Kalu, Rabi Plaza, Rawalpindi in the early hours of Tuesday Morning. All 5 onboard, including 2 Pilots and 3 crew members died in the plane crash.

As per the eye witnesses, the flight crash landed in a residential area and soon fire broke out that engulfed five houses, killing 18 civilians including a child instantaneously. A video was available on social media wherein people were pointing to the dead body of a small child and all the other family members who died in the explosion and the resultant fire from the crashed plane.

18 civilians were also injured in the crash which set off a fire in the residential area. The fire engulfed five houses in the flames and everyone in those houses died. Emergency Services 1122 Rescue teams reached the scene and extinguished the fire. Injured are shifted to the hospital.

Among the dead are the 2 Pilots Lt Col Saqib and Lt Col Waseem. Other 3 crew members that died in the Military plane crash are Naib Subedar Afzal, Havaldar Ibne Ameen and Havaldar Rehmat.

Causes of the crash are not yet known. Rescue officials say the plane suddenly lost contact with the tower.

Some sources tell us that the Inventory of Pakistan Air force is too old and due to the financial crunch, they do not have funds to buy spares for the aging air crafts. Sources blamed the low quality; cheaper replacement spares could be the cause.

As per the source, there is high corruption at the top brass. They buy cheaper spare parts while keeping the money in their pockets for their retirement abroad.   Moreover, due to recent conflicts, Air force is over stretched beyond its means. If spares are not made available, many more such fatal accidents may happen and lives of the senior officials lost.