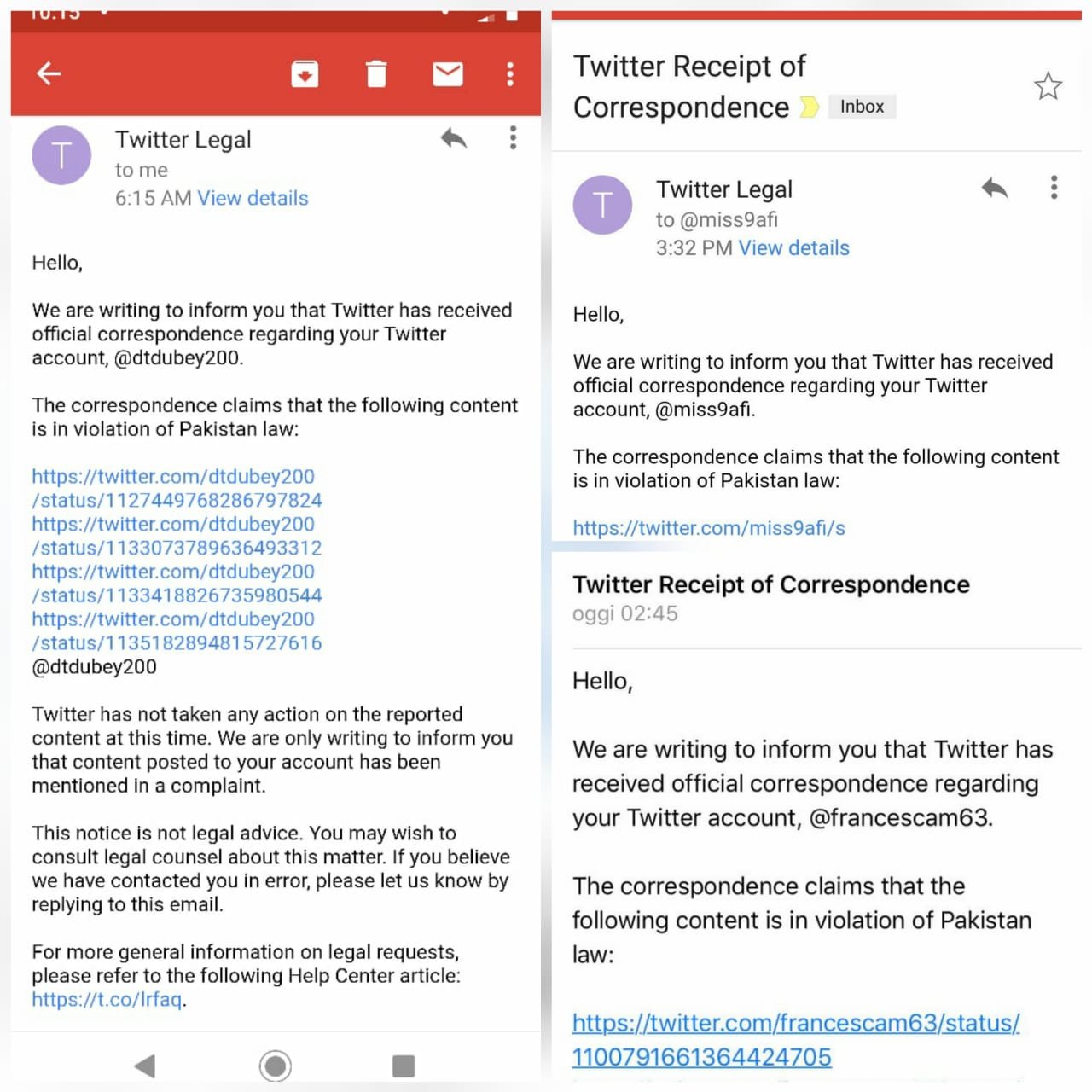 In recent past a lot of users on Twitter have received Twitter Legal Correspondence from Twitter, informing them regarding the receipt of official correspondence from Pakistan Government in regards of one or more of their tweets, that was in violation of Pakistan Law. There is a lot of anger among all Twitter users in all the countries on this arbitrary assumption of jurisdiction by Pakistan government in all the countries with free speech in the world.

One Twitter user questioned, “Is there any law in Terrorist Nation Pakistan?”

Another Twitter user questioned, “Pakistan is exporting Terrorists worldwide, killing innocent civilians. Shouldn’t the government of Terrorist Nation Pakistan be tried in International Court of Justice for its war crimes against the whole humanity?”

Another Twitter user told that Pakistan is committing genocide of the minority Baloch, Pashtun, Mohajirs, Sindhis, Ahamadiyas, Hazaras, Christians, Hindus. Over a Million people have been disappeared in last one decade. They have either been killed or sold for Organ Harvesting. International community must isolate Pakistan and impose sanctions against the Terrorist Nation Pakistan.

We tried to investigate a few of the handles and the tweets that Pakistan government found in contravention of their law.

A Canadian citizen Ensaf Haidar got the Twitter Correspondence notice on 30th November 2018 regarding the receipt of official correspondence regarding her Twitter account @misss9afi for one of her tweets that was in violation of Pakistan Law.

On 20th June 2019, a US citizen Steven Crowder got a similar Twitter Correspondence informing him about the receipt of official correspondence regarding his Twitter account @scrowder for one of his tweets in violation of Pakistan Law.

On 28th June 2019, a French Journalist Francesca Marino received  a similar Twitter Correspondence informing him about the receipt of official correspondence regarding his Twitter account @francescam63 for a few of her tweets in violation of Pakistan Law.

Same day i.e. on 28th June 2019, an Indian, Aditi Dubey who is an International Human Rights Activist, received a similar Twitter Correspondence informing her about the receipt of official correspondence regarding her Twitter account @dtdubey200 for a few of her tweets in violation of Pakistan Law.

Our website looked at the all the above mentioned handles and tried to find the tweets that were alleged to be in violation of Pakistan law. As you can notice, most of the tweets were showing their solidarity for minority Baloch, Pashtun, Mohajirs in Pakistan. Terrorist Nation Pakistan is committing genocide of its minorities and selling Balochistan resources to China under OBOR/CPEC. In order to exploit the natural resources from illegally occupied Balochistan, Pakistan army and its trained terrorist militia are burning villages, killing people, looting their houses of all valuables, disappearing people, selling them for Organ Harvesting.

Whole world knows Pakistan is the Terrorist producing factory of the world and exports its Terrorists worldwide. All major terrorist activities in the world have foot prints in Pakistan. Taliban that is responsible for killing more than 2000 US soldiers in Afghanistan is financed and supported by Terrorist Nation Pakistan. United Nations designated Terrorists Osama Bin Laden and Masood Azhar found safe heavens in Pakistan. Pakistan leached $33 Billion from US in the name of War against Terror and backstabbed US by secretely financing and arming Taliban and other Terrorists US forces were fighting against.

As per one of the US soldiers who participated in the War against Terror in Afghanistan, their were many instances when their arms supplies were stolen. Welding machines were used to break open the containers and their arms stolen from the containers that were meant for US forces. A lot of US guns and ammunition thus landed in hands of Pakistan. As per him every US soldier who has served in Afghanistan knows about duplicity of Pakistan and they can never be trusted.

We discussed this issue with one of the Legal experts. He told that Pakistan has no Territorial Jurisdiction

As far as criminal jurisdiction is concerned, the grounds or principles of jurisdiction mostly invoked by States are as follows.

2. The Nationality Principle – State jurisdiction extends to its nationals and actions they take beyond its territory. A State may prosecute its nationals for crimes committed anywhere in the world

3. The Protective principle – The protective principle implies that a State may exercise jurisdiction over an alien who commits an act outside its territory, which is deemed prejudicial to its security and interests. In practice however, this principle is applied in those cases where the acts of the person which take place abroad constitute crimes against the sovereignty of the State, such as plots to through a government, treason, espionage, forging a currency, economic crimes and breaking immigration laws and regulations.

4. The Universality Principle – State can claim jurisdiction over certain crimes committed by any person anywhere in the world, without any required connection to territory, nationality or special State interest. After the Second World War, universal jurisdiction has been universally recognized over certain acts considered as international crimes.  International crimes are those crimes committed against the international community as a whole or in violation of International Law and punishable under it, such as war crimes, crimes against peace and crimes against humanity

As per the Legal expert, Tweets mentioned by Pakistan Government as a violation of Pakistan Law does not fall in any of the above grounds and their complaint is void on the grounds of Jurisdiction. As per the Legal Expert, Pakistan has exported terrorists to its neighboring Afghanistan and India for decades. Indian government has given dossiers of Pakistan’s Terrorist activities to Pakistan, still Pakistan has never acted against the Terrorists who killed thousands of innocent civilians.

One of the Twitter user told that Pakistan has employed paid Twitter trolls who are inciting communal violence in India between different religious communities. Pakistan has been running propaganda to bleed India with 1000 cuts. As per the user, “If we take that into account, there will be thousands of such Pakistani Twitter handles that needs to be severely dealt with under Indian Law, that abuse and desecrate our Hindu Gods and Goddess pictures and incite communal violence.”

One Twitter user told, you dont need to any thing, just laugh at it.