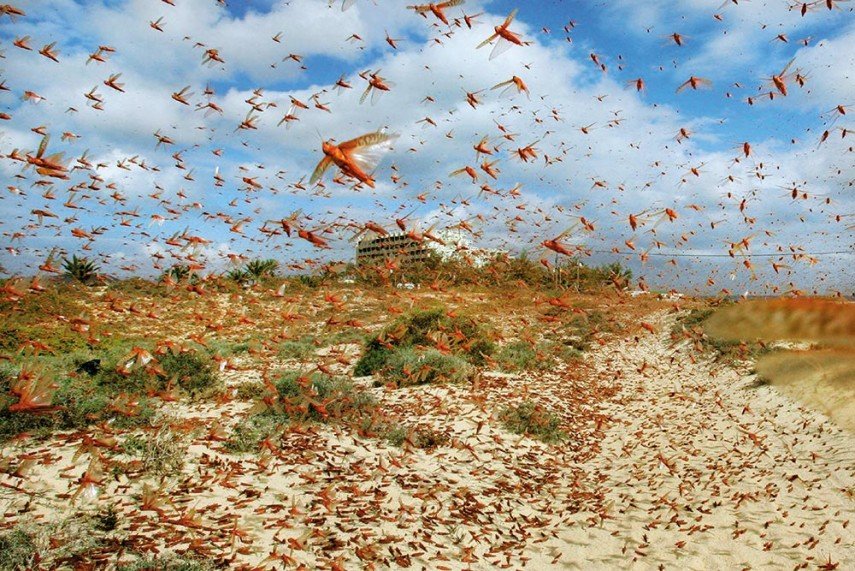 We got an email from one of our Indian readers on his Innovative Strategy to eradicate Locust Plague from the world. As we published our two articles on the Locust Invasion, we are getting a lots of queries. This Indian Patriot was very enthusiastic working for the Country to solve the Locust Plague problem. We got in touch with him and he shared his strategies both the short term and the long term. We were enthralled listening to his strategies to the minutest details. He has requested not to share share his contact information and instead share his Twitter ID @IndiaKaPrahari as his contact Information. He wants to first present his strategies to Indian Prime Minister Narendra Modi. Thereafter if he gets support from Indian Government, he can make customized strategies for different countries impacted by the Locust Plague and can even work with the United Nation.

We wish him best of luck and appeal all the Governments and United Nations to contact him via Twitter at his id @IndiaKaPrahari. His Strategies to eradicate Locust Plague are combination of small measures and uses local resources that any government can implement. Besides that the best part we liked was avoiding the large scale dumping of Insecticides and Pesticides in the desert areas and maintaining Ecological balance between flora and fauna.

We are reproducing his email below:-

I was researching on Locust Invasion in the whole Middle East, Balochistan, Sindh, and Indian states of Gujrat and Rajastan. I read a lot of articles. Of all the articles I found the following 2 articles on your website as very informative.

Locust Infestation In Balochistan And Sindh: Pakistan Is Not Bothered

Let me give a preface before I jump to my idea. I will advise everyone to read the above 2 articles on your website to understand what the issue is and what are the different stages in the lifecycle of the Locusts. How they lay the eggs, what time they take to grow.

Locust is generally found in two phases
(i) Solitary,when it is so called inactive and individual locust live scattered and
(ii) Gregarious, when it is very active, the individuals tend to remain together, breed rapidly and form swarms which leave the breeding grounds and invade far distant tracts and even cross many countries.

In addition to difference in behavior, the two phases can generally be distinguished by colour and some anatomical and morphological features.  The two phases run into each other, as there are some individuals which are intermediate in habits and physique and are therefore considered to be in transient phase.

A few differences between solitary and gregarious phase are as under:

Colour
-Hoppers have black pattern on yellow or orange background
-Adults rosy pink on fledging, darkens with age to grayish or brownish red then to yellow on sexual maturation. Males are brighter.

In all, there are three breeding seasons for locusts
(i) Winter breeding [November to December],
(ii) Spring breeding [January to June] and
(iii) Summer breeding [July to October]

India has only one locust breeding season and that is Summer breeding.  The neighboring country Pakistan has both spring and summer breeding.

I noted that Locust Control units around the world are putting an over emphasis on spraying pesticides or using flame throwers to burn the vegetation as a means of Locust Control. However, destroying vegetation by burning it or overgrazing as also the continuous use of pesticides can encourage locusts, because they kill the pest’s natural enemies. Non-target and beneficial species can be impacted by pesticides through direct or indirect routes, such as water contamination and runoff, pesticide residues, and by consuming food that has been sprayed.

A 2014 study published in Chemosphere examined the effects of different pesticides on a common insect predator. Researchers found that exposure to some pesticides were lethal, while exposure to others led to a decrease in plant feeding time and reduced predation rates.

As part of my research on this subject I looked at the natural predators of the locusts and made a list.

Since Locust Plague is a war with millions or Billions of Locusts already in our territory, I made two different strategies.

Drawbacks of the current solution to Eradicate Locust Plague

Heavy use of insecticides will also kill all the other insect and reptile species in the affected areas.

Insecticides if they seep into the earth with rain water in future, will contaminate the ground water and thus will impact human beings using that water.

Cost of Insecticides is very high and each small farmer cannot implement it.

Cost of detoxification of the soil will be much more than the cost of using the Insecticides.

If farmers use the insecticides, it will impact the produce that will have high quantities of cancerous chemicals and will cause different ailments to anyone using those agricultural products.

Dissent and dissatisfaction in the farmers community against the government.

No participation of public in general to eradicate Locust Plague.

The European Academies’ Science Advisory Council (EASAC) estimates global natural pest control to be worth $100 billion annually. Natural pest control is where insects consume pests so that chemicals are not necessary. It focuses on encouraging predatory insects to consume pests, which is a least-toxic approach that is undermined through chemical usage by destroying the balance that exists within a predator-prey relationship.

Non-target insects also act as a food source for animals that bring in a substantial amount of revenue.

US citizens spend over $60 billion annually on hunting, fishing and observing wildlife, much of which is dependent on insects as a food source. Researchers have found that there is a steady decline in these insects due to pesticide exposure and an overall decline in biodiversity. It could be concluded then that, as beneficial insect populations decline, their ability to provide ecosystem services will also decline, impacting the available wildlife for hunting, fishing, and observing. The demand for these recreational activities will stay constant while the supply (availability) will decline, causing an increase in dollars spent by US citizens for each year.

One short term strategy to immediately control all the Locust and prevent them from getting to a higher number so that they can form a swarm and can migrate to another location hundreds of kilometers away. This strategy is very aggressive and need support from the Government and all their resources working on this plan with utmost urgency.

This strategy uses the natural predators of Locusts. It also takes care of the egg pods that have been laid below the surface of the earth. If this strategy is followed, once the left over eggs hatch and the new locusts come out, they are also removed at the early stages.

It will provide employment to many people

It will create means of additional income for many in the short term.

Flora and Fauna are preserved in the areas.

Saving in costs in terms of millions of gallons of Pesticides.

Future crops will not face the ill-effects of the heavy use of Insecticides and pesticides.

Our plantation that is exported will not have exposure to Insecticides and Pesticides.

Second set of steps are part of the long-term strategy. Under this strategy, we will need to work with UN and other regional organizations on Locust Control to implement our strategy in all the countries. We can customize the solution depending on the resources available in that country. One this solution is followed in all the countries, we will not get to a situation at all where the Locusts can increase to such large numbers to ever form swarms.

Regular source of Income for many families/households/villages/businesses who will be the part of this strategy in all the countries.

Less use of Insecticides and Pesticides will also ensure that the natural predators of the Locusts are preserved and are available in all the geographies around the world.

Reduction in cost of agricultural production since these additional costs of Locust Plague and others will be avoided in future.

More availability of food worldwide as the damages to food crops due to locust Plague in all countries will be avoided in future.

What is needed at this point?

Via this article I want audience with our Indian Prime Minister Narendra Modi to present my strategies. I need full support from all the government departments to make this strategy successful. All the steps in the action plan for each strategy is to be performed at a war footing. Consider this a war and any single day delay will be difficult to compensate.

My strategies require cooperation not only from the people in the impacted states but other states also.

My research on the topic brought me to a point where I can tell the world “STOP DUMPING PESTICIDES AND INSECTICIDES” in the desert and wastelands immediately if you want to use the strategies I have formulated.

Furthermore i need help from Indian Government to help me get a process Patent if my strategy is accepted. We can take this solution to the whole world and work on ensuring food security worldwide.