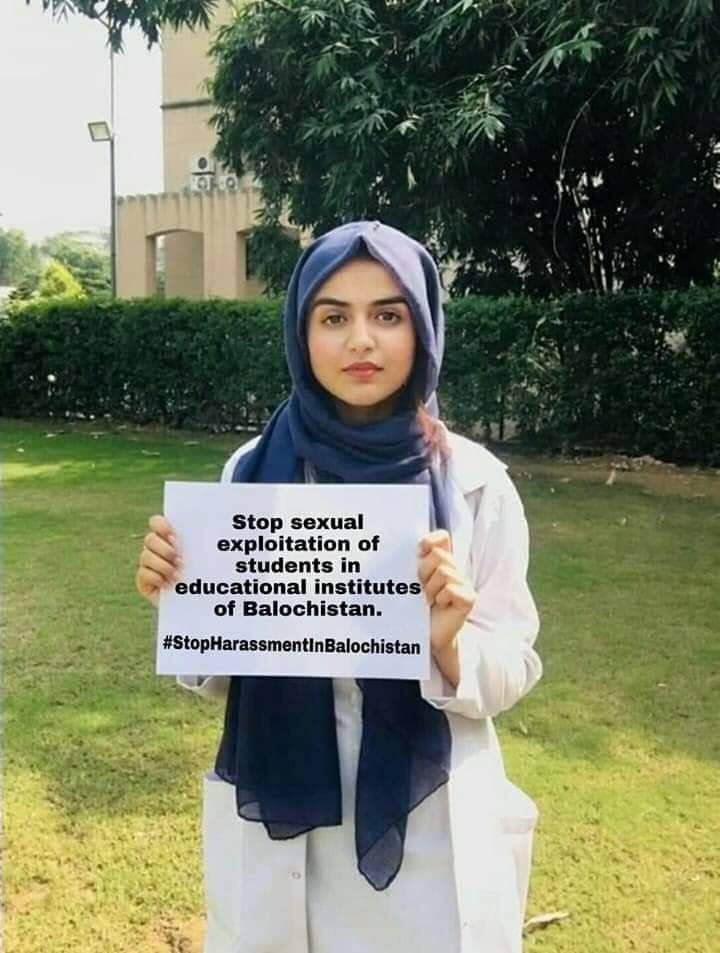 Along with the CCTV cameras on campus, additional cameras and microphones were placed in women washrooms and smoking areas. Movements of women students were secretly recorded by the management and those videos were then used to blackmail and seek sexual favors from them by the university administration and the security department officials.

One student said, “The administration members blackmail the students with the recordings and ask them for sexual favors in return. They send us friendship messages and ask us to meet them in private.”

At least 20 students have filed complaints over the matter.

Some women students living in the hostels have returned back to their houses as they no longer feel safe there. One student said, “Our parents will not let us continue studying at the university if such blackmailing and harassment issues come up.”

Women who faced harassment are not comfortable with opening up about their experiences. “There are thousands of cases here but everything is kept under the mat. No woman can speak about her experience publicly.

All the administration members are involved in the violations, especially the vice-chancellor, another student said, adding that the management has been silent for far too long.

According to sources, at least six cameras were secretly installed at various spots, such as washrooms and smoking areas, in the university’s Quetta campus, in addition to the already existing official CCTV cameras. These cameras were used to record videos of students, and then sexually harass and blackmail them.

12 videos of harassment of students have been traced. Most of the victims in the case are female students who were harassed by some officials in the university’s administration. Statements by various students’ organizations confirm claims that such harassment had been going on for quite some time on campus.

This incident has long-term negative consequences. It’s very tragic to see such cases in a region where women’s literacy rate is already below the benchmark, or very low. What is worrisome is that incidents like these are going to detach more female students from educational institutions.

On the one side, there is no awareness about girl’s education. Many people do not educate their girls, while some send their girls to school for a few years. Stereotypes in society are discouraging girl education. According to these stereotypes, it is a matter of shame and disrespect if a girl goes outside alone. In such societies, very few people take a step to educate their girls on the cost of tolerating all those stereotypes. On the other side, scandals of harassment and blackmailing in universities are going to crush the hopes and passion of those who have been sending their girls to educational institutions despite all challenges. But one must never let the passion of those proud parents be swept away due to the acts of a few troublemakers.

Balochistan is regarded as the least developed of the provinces, and national and international statistics bear this out. The female literacy rate in the province is 33.5pc as compared to 52pc for the rest of the country, according to the Pakistan Economic Survey of 2018-19.

In fact, there are quite a few districts in Balochistan, such as Dera Bugti, Sherani and Qilla Abdullah, where the female literacy rate has persistently remained below 10pc. Coupled with conservative tribal attitudes, the scandal may put greater distance between women students and their dreams.

Human Rights Commission of Pakistan (HRCP), on 16-October 2019 issued a Press ReleaseIwhich read, “The Human Rights Commission of Pakistan (HRCP) is concerned over allegations that elements associated with the administration at Balochistan University use campus surveillance videos – including those filmed by ‘secret’ cameras – to harass and blackmail students.”

“HRCP’s recent fact-finding mission to Quetta found an alarming level of surveillance on campus at the university. While this is in place ostensibly for reasons of security, the recent allegations show how easy it is for surveillance to become a tool of harassment, most often at women’s expense. HRCP’s sources claim that the surveillance system is used as a means of moral policing as well as to disrupt any potential or suspected political activism among students, allegedly at the behest of the Frontier Corps personnel who are permanently deployed at the university.”

“Secret cameras have no place at a university. HRCP supports those students who have called this a gross violation of their privacy and a means of coercion, and welcomes the Balochistan High Court’s decision to take suo moto notice of the matter. The Commission also urges the university administration to identify and penalize the perpetrators.”

Human Rights Council of Balochistan (HRCB) and Baloch Human Rights Organization (BHRO) investigated the matter and issued a report on 22-October 2019 and demanded that the Military should be expelled from Balochistan’s education institutions. According to the reports, the security staff of the University of Balochistan (UoB) had installed secret cameras to record candid videos of the students and then to blackmail them. Cameras were installed in places like washrooms and smoking areas, as investigation report says.

Balochistan has been under military siege for the last two decades. Independent journalists and human rights activists are not allowed to enter the region. Therefore, it remains isolated from the rest of the world, yet stories of serious crimes often committed by state institutions keep pouring out.

As a counter-insurgency measure, the country’s powerful army and central government have deployed thousands of soldiers with immense powers in Balochistan. A recent human rights report said over 700 soldiers were stationed at the university campus alone.

In some cases, schools in rural areas have been closed and the premises handed over to the army.

According to a report by the Human Rights Commission of Pakistan´s fact finding mission, released on October 2, 2019, around 10,000 students were enrolled in the university, being watched by over 700 FC personnel deployed at the UoB, after being declared the zonal Chiltan headquarters of the Frontier Corps, a paramilitary force.

The HRCP, before even the UoB scandal exploded, highlighted the complaints of some students that CCTV cameras were installed at their hostel. The report also hints about the harassment and blackmailing taking place at the campus.

The HRCP urged an end to the unwarranted and permanent involvement of the security forces in the affairs of educational institutions.

We, as human rights groups, are looking closely into the progress on the investigation and we are not satisfied. We believe that the FC and military should have been included in the investigation as there have been growing complaints against the FC of blackmailing and exploiting students.

We believe that the latest scandal will also discourage people in the patriarchal Baloch and Pakhtun families living in Balochistan from sending their daughters to school. Girls enrollment rate in Balochistan is already one of the lowests in the world.

We urge the concerned authorities that all the educational institutions be demilitarized and the FC should be made accountable for its growing human rights abuses in the region.

Protests are going on since the University of Balochistan Scandal came to light. Women students are leading most of the protests. Students are demanding action to be taken against all the guilty.

Their main demand is to remove the Pakistan Paramilitary forces (Frontier Corps FC) from the educational institution as these Paramilitary Forces are responsible for making candid videos and blackmailing the women students and seeking sexual favors.

Condemnation on the social Media

There was a lot of condemnation of Pakistan Government over the University of Balochistan Scandal.

In a series of tweets Gulalai Ismail tweeted, “I can’t even imagine pain and vulnerability of the students of Balochistan University. First the university was militarized, students were snatched from their basic right to association and student politics; and then digital surveillance was used to sexually harass the students.”

Chairman Khalil a Political Activist tweeted, “The removal of Vice Chancellor wouldn’t improve anything at University of Balochistan. He was working on the behest of FC and army. If someone wants to get things right in Balochistan, the accountability process needs to begin with the FC and the army. They are the real boss.”

She further said, ” Who turned Balochistan’s largest academic academy into Camp does not need to be investigated because they all know that the people used by the university staff need to find out if it was their individual practice or its There was a powerful gang behind this #RestoreStudentsUnion”

In the meanwhile Students Union after the protests in University of Balochistan Scandal has been banned.

Joraan Baloch with Twitter Handle @JoraanBaloch tweeted on 23-October 2019, “If Balochistan university scandal had had occurred in Kashmir & Indian army were involved in that issue, Pakistan army, politicians & diplomats could have raised that issue in all international forum including @UNHumanRights @Chellaney @RSSorg”

He again tweeted on 26-October, “For your information the culprit behind this scandal were army who committed this heinous crime in Balochistan university our baloch leader Nawaz Bugti sacrificed his life for the honour of Sindhi girls because the Sindhi girl was raped by army general”

In another reply Joraan Baloch tweeted, “In Balochistan, few parents have blinkered view towards female education, Balochistan university scandal—where females students were blackmailed by army backed V.C —was planed to close the door of education for baloch girls @Chellaney @kakar_harsha”

Here are some more Tweets for condemnation of and demand for Justice and protest demanding action against the culprits be taken.

University of Balochistan Scandal: Some Professors back students

The university professors and staff members confirmed to the media that they have seen these ‘secret cameras’.

Kaleem Ullah Barech, the president of the university’s staff association, and Fareed Achakzai, a varsity professor, along with other professors condemned the incidents of harassment and extended their support to the students in a press conference at Quetta Press Club.

The university has been under the radar for such negligence for the past four years, said Barech.

“How is it possible that a Grade 4 officer installs secret cameras in the varsity?” Achakzai asked. “Surely, there are other people of a higher rank than the university’s staff involved in this.”

The cameras were placed inside switch boards and bathrooms at the university, the teachers revealed.

The university administration, however, has denied installing secret cameras to spy on students.

Balochistan High Court Chief Justice Jamal Khan Mandokhail directed the FIA to investigate complaints of students being harassed at the varsity last month and submit a report by October 28.

The FIA has been examining the case for several weeks now.

The officials, however, refused to reveal their findings. “We have not arrested any official of the university and will inform the media through a press conference,” an FIA officer said.

He added, almost as an afterthought, “But the institution’s reputation should not be damaged at any cost.”

A spokesperson of the UoB said that no security officers or surveillance in-charge have been arrested. As per some students since the Frontier Corps (FC Paramilitary Force) itself is engaged in blackmailing of women students, how can there be any justice as long as the forces are occupying the University campuses.

There are people talking about futility of the protests or demonstrations and suggesting that all Baloch people should follow the path of Nawab Akbar Khan Bugti, do or die.