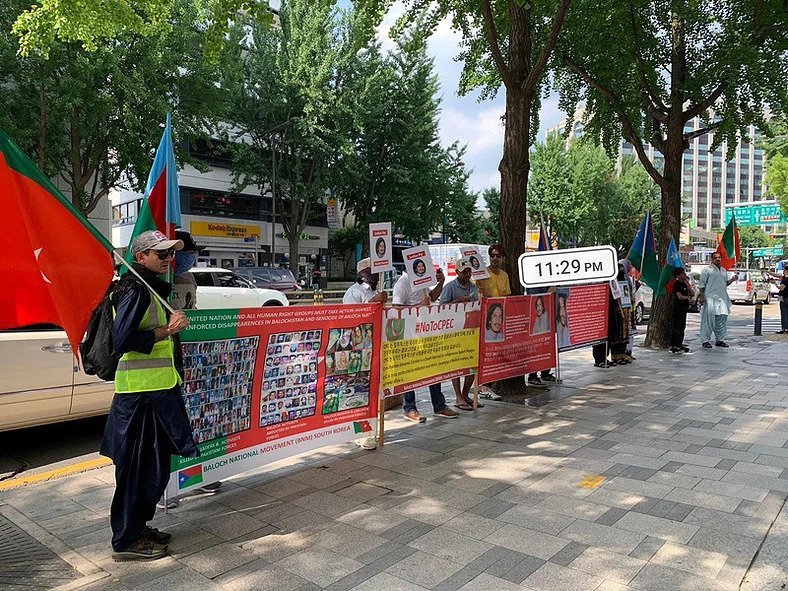 Baloch National Movement (BNM) spokesperson said that Balochistan Independence Day Conference and Demonstrations were held by BNM on August 11, in Balochistan and various other countries. A conference was held in Frankfurt (Oder) Germany and protests were organized in the city of Münster Germany, Melbourne Australia, and also a reference program was held in Greece. Demonstrations were also organized in South Korea and South Korea’s capital city Seoul in front of Chinese embassy. BNM submitted a memorandum against the Chinese hegemonic ambitions and Pakistani war crimes, enforced disappearances, extrajudicial killings, and human rights violations in Balochistan.

We covered details of the a few conferences held in our previous article “Balochistan Independence Day – Freedom Fighters Blew Up Railway Track“.

While addressing the audience, Hammal Haider Baloch said: “11th August reminds us of our free land which was forcibly annexed by Pakistan through the barrel of guns and turned us slaves. This time the Baloch nation has continuously struggled against this slavery for the last two decades.”

He was confident and hopeful that Pakistan as a state sooner or later would collapse and he remarked,” Pakistan is going through the worst and lowest ebb of its history and it would certainly collapse. Its economy is sliding down and has been isolated in the international political arena. In such conditions, it would fail as a state and would be dismembered any time. Instead of waiting we should equip ourselves for the future course and if we fail to do this, like in the past we would not be able to keep our freedom for long. In 1947 we were only free for some months but this time we should prepare ourselves for six thousand years of freedom.”

Renowned Baloch writer and historian Dr. Naseer Dasthi addressed to the conference and said such gatherings of the younger generation for the cause of national freedom is pleasant. The young generation should continue this struggle with strong commitment.

The forcible annexation of Balochistan to Pakistan was an international conspiracy. After World War ll Great Britain required a gatekeeper in this region to protect their lasting interest, which was formed in the shape of Pakistan. They feared a free Balochistan, that could hurt the interest of the west while playing at the hand of Russia and other powers.”
He further highlighted another reason and said “The personal weakness of Khan of Kalat as ruler was also another reason for losing national freedom within 8 months soon after getting freedom from the British. Khan Kalat did not act on the advice of Parliamentarians and Sardars who advised him to go Afghanistan and ask Afghan government to recognize the de jure position of Balochistan and from there via Russia go to Geneva and fight the Balochistan case into newly formed United Nations against Pakistani aggression on Balochistan. But Khan of Kalat did not act on their suggestion.” Dr. Naseer Dasthi lamented and said, “if Khan of Kalat paid head to this suggestion of Sardars and parliament members, perhaps today the scenario would have been far more different.”

Dr. Naseem Baloch, the Organizer of the Baloch National Movement diaspora Committee said, “11th August reminds us that we were a free nation. Though this was for a short time and we could not get the blessings, hence today other nations may not realize the importance of freedom in that intensity where we as a slave nation can feel it when we as slave see torture and death on daily basis. Today not a single-family from Balochistan is spared the persecution and atrocities of Pakistan.”

He added,” in the process of national struggle, an unpledged strong commitment is very important. If we are strong then the martyrdom of our relatives and friends, torture and atrocities, and the life as a refugee would never be a reason to dent our commitment rather it will help us to stire our determination. Because there is not a determined date for national freedom and this realization would strengthen our commitment. And this struggle despite the atrocities of the enemy and internal rifts and differences is continuing for the last two decades and this longevity would hurt the nerves of our enemy. The Taliban are a prime example of this hypothesis where they forced the USA, the sole Superpower of the world to negotiate a deal with them.”

Dr. Naseem Baloch said,” on this day, 11th August every year we should renew our commitment and energies ourselves. The members of the Baloch National Movement pledge to themselves that they would not hesitate to make any sacrifice for the cause of national freedom. Baloch National Movement is always ready and willing to work with other parties and organizations on the single point of national freedom of Balochistan.”

Saleem Sanahi, the president of International Friends of Sindh said to the audience, “our enemy is very cunning that for several times tried to create a rift between Sindhi and Baloch but fatally failed in its evil schemes. Pakistan picked labor from minerals resource-rich Badin and Thar by offering those labor 3 fold salaries to work on a rejected project of CPEC so that they would become target of Baloch freedom fighters and create a gulf between Sindhi and Baloch but Baloch and Sindhi fully scaled the intention of the enemy and failed the ploy of common enemy.

He said the relation of Sindhi and Baloch is centuries-old. Baloch are also the son of the soil in Sindh. But Pakistan has been settling settlers in Sindh and wants to convert the Sindhi nation into a minority”. He also remarked that Sindhi are with the Baloch nation in their struggle for freedom.

Baloch Human Rights Organization (BHRO) General Secretary Abdullah Abbas gave a presentation by highlighting the human rights violation in Balochistan by the Pakistani Army and its intelligence agencies. He said, “Balochistan is rich in natural resources but its native people don’t even have access to basic needs of life such as clean drinking water. People of Balochistan are lacking in education and health. The mortality rate is highest among children. Thousands of people were the victim of enforced disappearances and more than 7000 were killed and dumped on the roadsides.

He said Pakistan created many Islamic terrorist proxy organizations in Balochistan which are directly involved in the abduction and killing of Baloch political and social activists.

Haji Naseer Baloch, the ex-finance secretary of Baloch National Movement said freedom is a blessing but unfortunately we lost our national freedom. And our previous struggle was short lived. But this time Baloch national struggle continues for the last twenty years which is duly possible because of the existence of parties and other organizations those are honestly working for the last two decades. For getting national freedom surly we need the support of international organizations and other countries but we cannot blindly trust on individuals.

Today Baloch National Movement and other parties are taking the national struggle forward on an organizational basis and we are determined that sooner or later we would reach our desired destination.

Adil Baloch, the Vice President of Baloch Republican Party Germany presented a presentation on the history of the Baloch nation. He said Balochistan has its unique history of itself. The Mehrghar civilization is as old as more than 7000 years. He said that Pakistan at first recognized Balochistan as a free country and accepted the 11th August 1947 position of Balochistan as free land but soon after Pakistan invaded on Balochistan and occupied it. Adil Baloch in his presentation showed the different stages of Khanates of Kalat state, agreements of the British Government with Kalat state.

Hammal Baloch, the president of Baloch National Movement Germany zone thanked all guests and participants of the conference.

In the end, a resolution was passed with a majority

a. Pakistan should withdraw its forces and accept Balochistan as a free and autonomous country.

b. United Nations should take action against Baloch genocide and cultural genocide of the Baloch nation.

c. Reject CPEC and other exploitative associated projects which are intrigued with converting the Baloch nation into a minority.

d. Pakistan along with Baloch is involved in human rights violation of Sindhi, Pashtoon, and other nations, and we condemn it.

e. The forced conversion of Christian and Hindu into Islam by Pakistan, and we strongly condemn this act.

f. Reject religion extremism in Balochistan and the region in which Pakistan is directly involved in.

g. International civilized World should play a role against enforced disappearances and extrajudicial detention of Baloch people in torture cells.

h. Baloch, Sindhi, Pashtoon and other oppressed nations should unitedly struggle against Pakistan.

i. Asks the United Nations to send its peacekeeping mission in Balochistan to stop Baloch genocide by Pakistan.

In this regard, the members of the Baloch National Movement also submitted a report to Amnesty International. A report was also submitted to the United Arab Emirates embassy regarding the extradition of Rashid Hussain Baloch; although they refused to accept it.

Baloch National Movement central spokesperson informed that the demonstrators also marched through different streets of Seoul ending in front of the Chinese embassy. The protesters submitted a report to Chinese embassy which was comprised of atrocities of Pakistan in the wake of China Pakistan Economic Corridor (CPEC) which resulted in a mass migration of half-million population, killings of innocent people due to aerial bombardment and destruction of hundreds of villages in the route of CPEC.

It is worth mentioning soon after China Pakistan agreement on CPEC half million of people from Panjgur, Baalgatar, Hoshaap, Shahrak, Shapuk, Saami, and Dasht were forced to migrate in other places.

BNM Spokesperson also provided a video created by BNM on China’s One Belt One Road (OBOR) Initiative and its adverse impacts on Balochistan and the region.

As per the video, “It is well established fact that Chinese expansionist policies are a definite threat to Global stability. China has decided to reach the warm waters of Gwadar, Balochistan, which is the busiest trade route. Lately CPEC is introduced. Claiming to be economically motivated project. It is a well known fact that it is a cover up of its expansionist agenda. Real intention is to deploy and permanently station its Armed Forces in Gwadar. On the other hand, Pakistan has left no stone unturned to help China because Pakistan has its own political and economic interests in CPEC.”

“Pakistan is known as a Military state. Pakistan Army is available to the highest bidder. Its sole purpose is to make money. As it has been in the past where Pakistan sold its nuclear program to Iran and North Korea. In this situation, Pakistan will benefit from the Chinese military presence in the region, being too close to India. Where the whole world remains mum on all these situations, Baloch Nation is the only force that ends these Chinese and Pakistani Agendas.”

“Baloch Freedom Fighters with minimum resources fiercely fighting with Chinese funded Pakistan Army. In order to complete CPEC, China and Pakistan decided to start a systematic Genocide of the Baloch Nation, by conducting daily military operations resulting in mass abductions and mass killings and continuing with the kill and dump policy.”