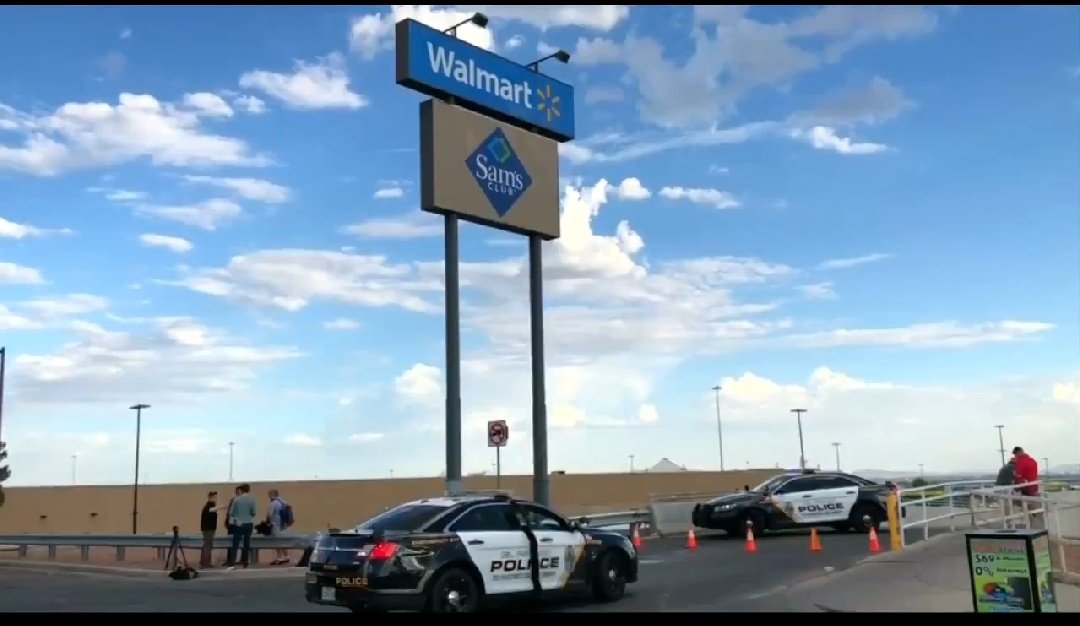 In the recent past, there have been many domestic attacks leading to massive casualties, prompting people to raise demands every now and then for gun control. Democrat politicians and their supporters leave no occasion to blame Conservatives and President Donald Trump accusing him of speaking against the illegal migrants. Mainstream media go all guns blazing whenever the shooting is done by a “White” person and the hate campaign against President Donald Trump continues for days on all the Liberal media channels.

2019 itself led to 248 attacks with 246 deaths and 979 injured, the deadliest being the one shooting at Walmart El Paso yesterday. 10 attacks had more than five casualties. But, slowly, there are demands to call it a sort of terrorism as like what happened yesterday. Or is it the liberal’s idea to use the word “Terrorism”, because yesterday’s attack was to show the anger against immigration from Latin America? It is important to note, even the second attack at Dayton didn’t carry much importance even though it’s the third deadliest in the year in terms of deaths and second in terms of total casualties.

20 people were killed and 26 wounded after a man started shooting at Walmart, El Paso in the Texas, US. Authorities said on Saturday the suspect, A 21-year-old man was arrested outside a Walmart store near the Cielo Vista Mall, eight kilometres from a border checkpoint with Mexico. Authorities are investigating.

President Trump speaking to reporters in Morristown, New Jersey said he will have a statement on Monday about the shootings.

President Trump said, “We love the people. Hate has no place in our country, and we’re going to take care of it. I spoke with Attorney General William Barr, I spoke to Christopher Wray, Director of the FBI, spoke to both the Governors, we are doing a lot of work and lot of law enforcement and other people are working. I spoke to members of congress about what we can do. Lot of things are being done right now as we speak. I will be making a statement tomorrow sometime. Her first lady and myself, condolences to all. We have to get it stopped. This has been going on for years in our country and we have to get it stopped.”

President Donald Trump tweeted, “Terrible shootings in El Paso, Texas. Reports are very bad, many killed. Working with State and Local authorities, and Law Enforcement. Spoke to Governor to pledge total support of Federal Government. God be with you all!”

Believed to be the eighth deadliest in American history, yesterday’s shooting at Walmart, El Paso, a town of 680,000 with an overwhelming population is another grim reminder of the policies where immigrants are preferred over locals for whatever reasons – vote bank politics, cheap labour etc. As per the news, “a white supremacist”, Patrick Crusius from Allen, Dallas posted a document on 8chan, an online messaging forum complaining over a “Hispanic Invasion of Texas” some 20 minutes before the attack. The attack, on the local Walmart in Cielo Vista Mall with an assault-grade rifle, led to 20 dead and 26 injured. The police were at the site in less than six minutes after the first call of distress was made at 10:39 AM local time.

When police surrounded him and ordered him to surrender, he complied without any resistance.

In a news conference, US Attorney for the Western District of Texas John Bash said, “We’re treating this as a domestic terrorist case, to be designed to intimidate a civilian population, to say the least”.

“People were panicking and running, saying that there was a shooter. They were running close to the floor, people were dropping on the floor.” Kianna Long told Reuters news agency. She escaped with her husband into a stock room and cowered for safety.

The outrage is expected. “It’s the fact he was targeting us. I’m a Mexican-American and very proud of that. To me that is the biggest wound.” said Gilda Baeza Ortega, a local of El Paso.

A vigil was held with people coming with flowers and wreaths and flags are flown half mast.

On the other side, the Mexicans who visit the city frequently for shopping are stuck in the town as their passports are in their cars and the police locked the parking space.

And the political slugfest started. American opposition, which sees an opportunity in everything to target Donald Trump didn’t miss this. New Jersey Senator Cory Booker said “Donald Trump is responsible for this. He is responsible because he is stoking fears and hatred and bigotry.” This was countered by the acting White House White Chief of Staff Mick Mulvaney “There’s no benefit here in trying to make this a political issue, this is a social issue and we need to address it as that.”

Parallel to this, there was another attack, in Dayton, Ohio approximately two hours later – Connor Betts shot and killed nine, including his sister in Oregon District of the city before he was shot dead by the police. 27 were injured. He came with body armour and extra rounds, clearly telling the planning involved.

As of now, no motive is attributed to the second attack and the frustration at such attacks all over the country is clearly visible in the words of the Dayton Mayor Nan Whaley “Frankly, we’re at a situation now in our country that these are so random…What really goes through my mind is one seems completely preventable. I just question when is enough, enough” A vigil is arranged for the attack.

After the shooting at Walmart, El Paso, One of the Islamist, Reza Aslan retweeted a tweet from Kellyanne Conway stating “You are “the depraved evil” we need to eradicate.”

There was a lot of criticism over social media on these comments from Reza Aslan’s above tweet. One Twitter user Ashley StClair @stclairashley questioned Twitter, “How is this NOT an incitement to violence?? Reza Aslan says Kellyanne Conway needs to be eradicated. This is the same man Twitter failed to take action against after he incited violence against HIGHSCHOOL KIDS at Covington. Suspend @rezaaslan!”

Social Media was abuzz with the hashtag #WhiteSupremacistTerrorism as pedaled by the Liberals and Democrat followers. A lot of questions are being raised. Calling it “White” Terrorism, are the Liberals not being racist here? Does anyone use a similar hashtag when the Mass killer is not a “White”? Is it not a propaganda being run by MSM to malign all the “White” people in the US, instead of giving condolences to the bereaved families? This is called, deriving a political mileage out of the unfortunate shooting. Did the MSM release the social profiles of all the mass killers? Is this killing not being used as a tool by Liberals, Democrats as a tool to corner President Trump before 2020 elections?

As per one person, “same Liberals and Democrat followers and MSM, who are shouting at the top of their pitch today, go silent and don’t call such names or Hashtags when the shooters or killers are not American Whites. Because, the 2020 elections are near, opposition needs an agenda to corner President Trump who had been working hard to Make America Great Again (MAGA).”

One of the Twitter user @BrennerBrief tweeted questioned the Mainstream Liberal Media asking some pertinent questions that will make every logical thinker the correct perspective. In his series of his tweets he asked “Why does MSM, who 1. Constantly blathers about “white supremacy” (& the supposed influence Trump has on them) & 2. Has proven themselves to lie to support their narrative – have exclusive access to social media profiles of mass killers?”

He exposed a few of the recent mass killers and the lies peddled by the Mainstream Liberal media. He said in his tweet, “MSM lied about NZ killer Brenton Tarrant – who trashed Trump and & conservatives in his “manifesto” – which is not allowed to be viewed by the public & banned altogether in New Zealand, where one could go to prison for simply having it in one’s possession.”

He also exposed the “Unite the Right” rally. In his tweet, he said, “The infamous “unite the Right” rally consisted of white supremacists who not only don’t represent conservative viewpoints (ie, limited government as envisioned by the founding fathers) but speak favorably of socialism. “https://www.trevorloudon.com/2017/08/david-duke-and-the-unitetheright-leaders/”

He further gave another example of another Mass killer. He said in his tweet, “Jeremy Christian killed 2 people in Portland Oregon in 2017. The MSM repeatedly referred to Christian as “far right” but what does that mean? Here are some of his FB Posts, what nobody can access because they have been scrubbed.”

He further shared the “My Life” profile of Connor Betts along with a link. He said, “Here is Connor Betts “My Life profile as of June 17 2019”

In his closing tweet @BrennerBrief said, “Americans shold have access to social media profiles of mass killers. I do not trust MSM to honestly report motives, as they have proven repeatedly to s pin the news in the direction of their narrative. Also, local law enforcement should be the ones to investigate, NOT the FBI.”

As per sources, the shooter Connor Betts was pictured with satanic patches on his jacket. As per Robby Starbuck @robbystarbuck “The patches he’s wearing are from a known Satanist apparel company. One of them reads “against all gods”. This is a cultural problem A godless culture of death with no respect for life. As per sources, the shooter was wearing “No heart to feel, no soul to steal” T-shirt.”

As per another twitter user after the Walmart shooting at El Paso, “When you give in to the bad voice and worship the bad voice instead of acts of kindness the outcome is always bad. Satan if u believe in heaven and hell wants all of our souls.”

However, one needs to question and address this trait of violence in youth where a youth, generally a person selects a target far from his house, gives a forewarning of his attack and even a justification.

A tweet from Major Gary Nichols rightly gives the solution, “Politicians stop the blame game. We let liberals take God out of everything, Christians are persecuted right here in our Country that was founded on the belief and worship of God. Bring back God, lift HIS name and the shootings will stop. Amen!”