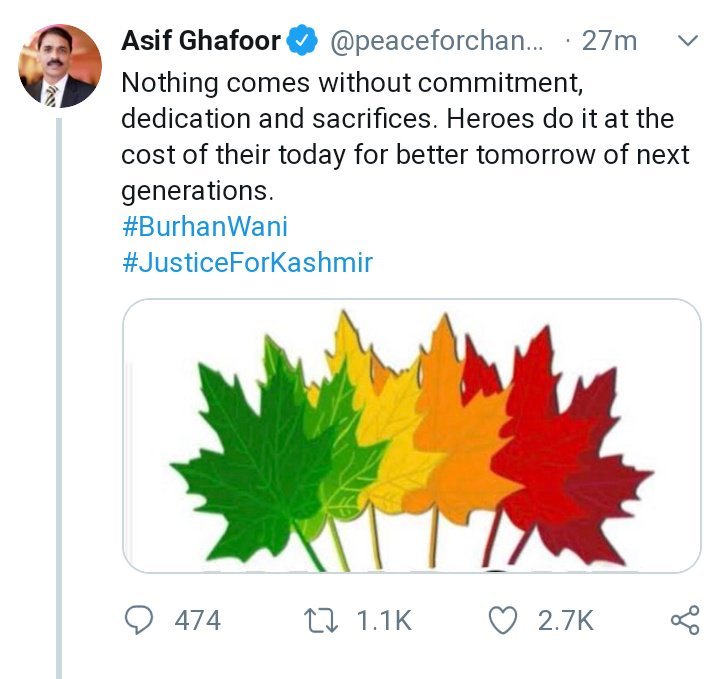 Major General Asif Gafoor is no stranger to self inflicted controversies. The confusion he creates over the 27 February failed air raid provides an ample proof for that with he changing his status every few hours till he settled on one Indian pilot downed with no loss to Pakistan.

Today, he dragged himself into another controversy by putting a tweet glorifying a terrorist from a globally designated terrorist organisation.It is already known to the world that Hizb-ul-Mujahideen is a global terrorist organization and its poster boy Burhan Wani was encountered by India on this day three years ago.

Asif Ghafoor’s actions will have massive implications for a country which is staring at a FATF Blacklisting and India may not look leniently if there is a law and order breakdown on this account.

Twitterati is already up in arms against this. One of the Twitter user commented “Here’s an “officer” of  FATF grey listed nation , glorifying a terrorist and hailing him as a ‘Hero’. Not surprising as this country funds, harbours & promote terrorism worldwide.Burnham Wali was a terrorist, responsible of claiming lives of 100s of innocent lives in Kashmir.”