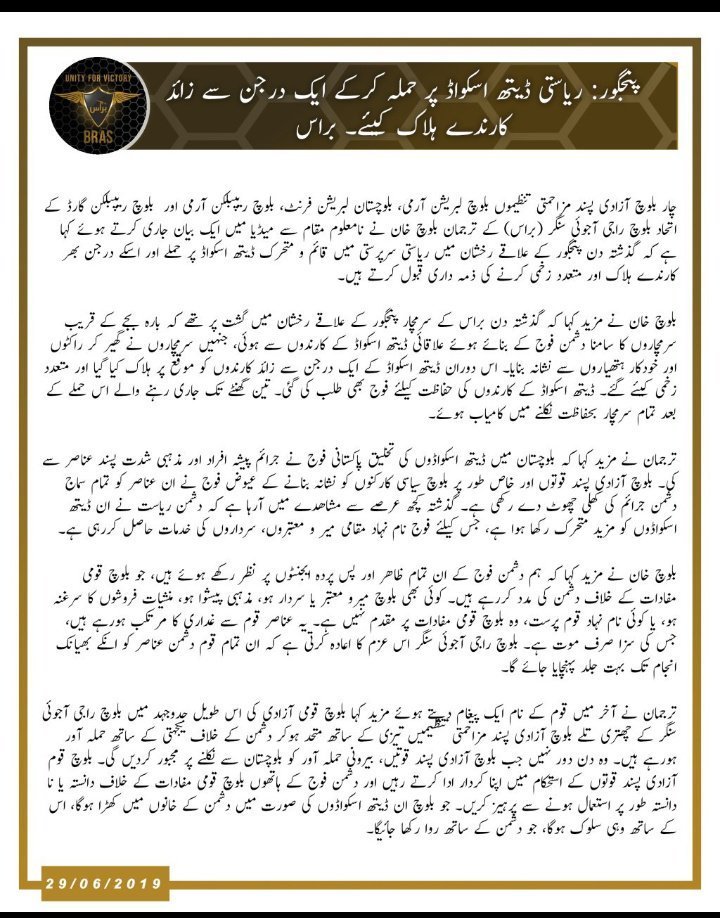 On 29th June Baloch Freedom fighter groups attacked the Death Squads created by Pakistan Army, that comprise of Criminals, Islamist Radical extremists and the militia. Pakistan Army is using these expendable criminals and terrorists to kill and loot the local Baloch civilians, burn their villages so that people leave the areas and the same areas can be exploited by Pakistan and Chinese companies for natural resources.

In a press release we obtained from the Freedom fighters, we tried to translate the text from the local language. (Please excuse for mistakes in the translation)

On 28th June Night, Baloch khan was on patrol in Rakhshan area Panjgur, who was facing enemy raids near the region of death squads which was surrounded by around 12 pm, surrounded by rockets and automatic weapons targeted for a long time, the enemy state has kept the Death squads more dynamic for which the army is serving native born local leaders.

The spokesman Baloch Khan said that the Pakistan Army has created Death squads that includes criminals, Islamist Radical extremists. The Pakistan army targeting Baloch freedom forces and especially Baloch political workers has given these elements an open waiver of all social crimes. For a long time, the enemy state has kept the Death squads more dynamic, for which the army is serving native-born local leaders.

Baloch khan further added that we are looking at all the clear and visible agents of the enemy, who are helping the enemy, against Baloch national interests. He said if any Baloch leader or a religious leader or a non nationalist, if they are involved in a criminal acts on national interests, these elements will be acted against by the group whose punishment is only death.

Baloch Rajji Aujai sangar reiterates the commitment that all the elements of the enemy will be delivered very soon.

The spokesperson finally said in nation’s name, adding that this long struggling of Baloch national independence, Baloch freedom groups like the Baloch Rajji Aujai Sangar are increasing aggressively attacking the enemy. The day is not far when the Baloch will force freedom forces, the foreign invaders to leave Balochistan. Baloch people continue to play their role in the stability of freedom forces and avoid being used wisely or ignorant against the national interests of the enemy. The Baloch who is standing with the enemies in the case of path squads will be treated as opposed to the enemy.