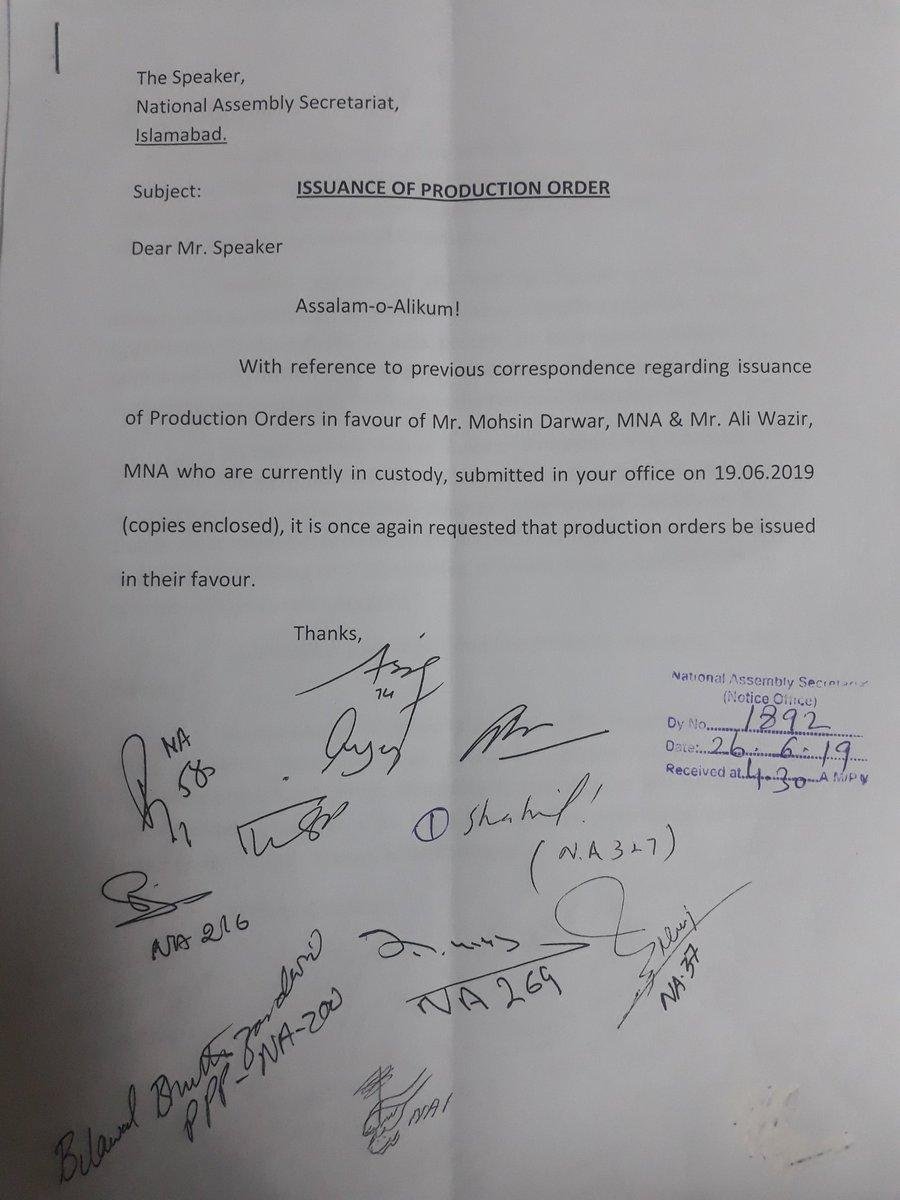 A united opposition demanded the Speaker of the National Assembly of Pakistan to issue Production Orders for the two abducted Pakistani MNAs Ali Wazir and Mohsin Dawar from Waziristan. It is already known that Ali Wazir was abducted by army of Terrorist Nation Pakistan during a peaceful, non-violent, Gandhinian protest against Pakistan Army. Both abducted Politicians had questioned the abduction and disappearance of thousands of missing persons mysteriously disappeared by Army. Mohsin Dawar was forced to surrender after a scorched earth against the people of the area.

The issue of the two missing MNAs has become a prickly point in the relation between the opposition and the government and has helped solidify opposition unity inside the Parliament. Though there is no confirmation, both of them, who are rumoured to be in military custody in Bannu were shifted to Peshawar Central Jail on a fourteen day judicial remand on June 24th.

Today’s request is the third request made for their production in the Parliament. It is already known that Speaker Asad Qaiser courted controversy by openly declaring he didn’t receive a request in spite of receiving a request for Production Orders from Bilawal Bhutto Zardari on May 30.

It should be noted that 21 people were shot dead and over 50 people injured on 26th May, when Army of Terrorist Nation Pakistan opened fire on peaceful, non-violent, Gandhinian protesters against abduction and disappearance of thousands of minority Baloch and Pashtun civilians

Since then the Minority Baloch and Pashtun civilians have staged protests worldwide. Their chants in all the protests “Yeh jo dehshatgardi hai, uske peeche vardi hai” (Pakistan Army is behind all the Terrorism in Pakistan).

After Khar Qamar Massacre of Peaceful Non-violent Gandhinian Protesters by Army of Terrorist Nation Pakistan, PTM Pashtun Politician Mohsin Dawar, before voluntarily going to jail to save the lives of villagers in North Waziristan, gave a speech, asking people to remain Peaceful and not to take up arms despite any provocation by Army so as not to dilute the nature of their Gandhinian protests.