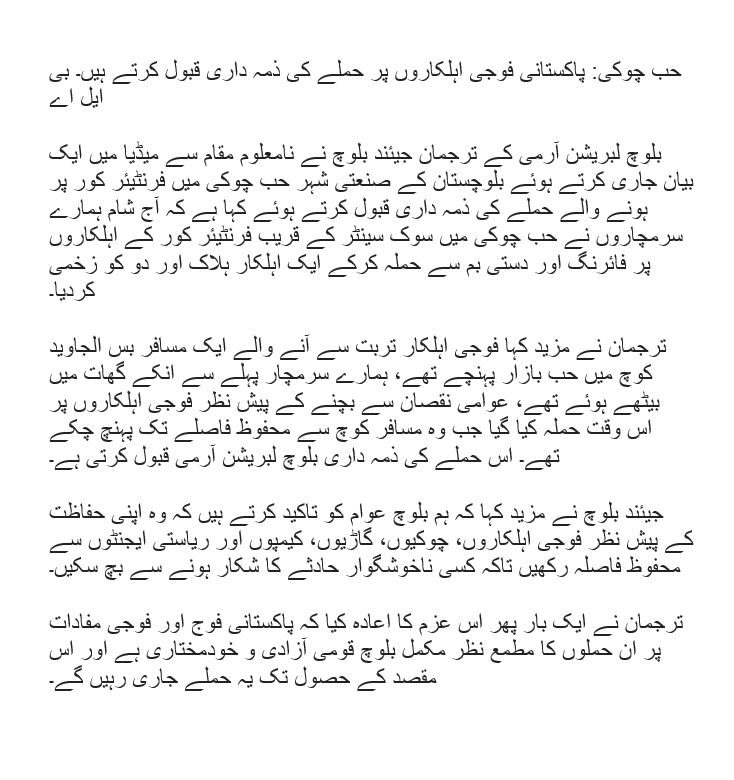 1 Pakistan Army Soldier killed and 2 injured in firing and hand grenade attack by BLA. In a statement issued by Hakkal Media, received yesterday “We take full responsibility of attacking the Pakistani Soldiers: BLA”

Baloch Liberation Army spokesperson Juinad Baloch issued a statement from an unknown location and stated that the Industrial City of Balochistan, Hub Chowki’s attack on Frontier Corps was done by our Brave Freedom Fighters (Sarmachars) this evening and they killed one solider and injured two by firing and attacking by hand grenades.

Spokesperson informed that Army Soldiers came by a regular passenger bus service named Al Javeed Coach to Hub Market. Our Sarmachars (Brave Freedom Fighters) ambushed them with keeping civilian’s safety in their minds. When civilians reached out in the safe distance, they attacked. BLA take complete responsibility of this attack.

Junaid Baloch advised & warns the Baloch nationals to stay away from Army Soldiers, Check Points, Vehicles, Camps, Undercover Army/Agencies Staff so they can be safe from any mishaps during the struggle of our freedom.

Spokesperson once again declared that BLA point of struggle by attacking on Pakistani Army & his struggle will continue till complete Independence and Freedom of Balochistan.