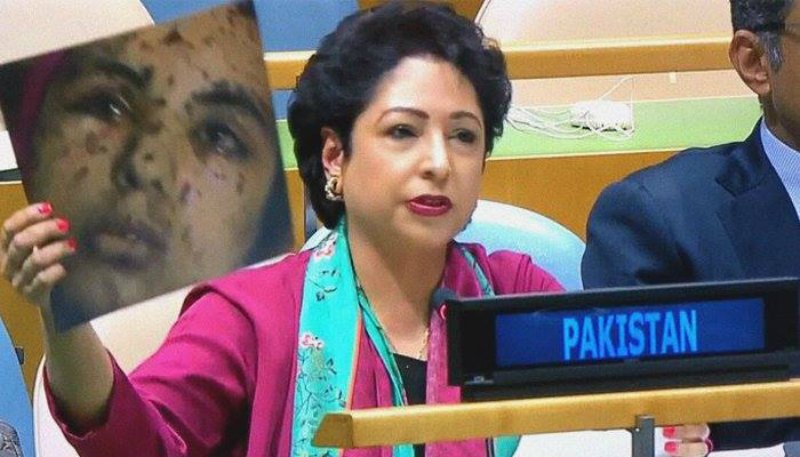 The writing is on the wall. Anyone who can’t perform against India, however hopeless the odds are, you are not spared. The only ones whose mistakes will be tolerated are Imran Khan, Shah Mahmood Qureshi and Qamar Javed Bajwa. The list, even now, is very long, with new names being added every other day.

19 April 2019: Fawad Choudhury, Minister for Information and Broadcasting – Removed and made Minister for Science and Technology.

12 September 2019: Bilal Akbar, Commander X Corps and responsible for all action on Indian Border – Removed and made the head of Pakistan Ordnance Factory.

In fact, it is possible that the current ISI Chief Faiz Hameed is also on the route home – in a country like Pakistan, one wouldn’t expect the courts to open cases against people like DG ISI, however grave the issue is.

Some names like Fawad Choudhury or Asif Ghafoor are expected as they failed on the propaganda front. But names like Bilal Akbar or three ambassadors? They have done what’s humanly possible with the resources they were given.

Many Pakistanis will be nostalgic seeing this image, where the calm and composed bespectacled Bilal Akbar is not seen for the first time in years.

It is understood that the whole of Rawalpindi Corps is on the Indian border, unsupported by any other Corps and is taking a heavy beating from India regularly. There are reports of insufficient ammunition and destroyed sectors. In fact, an SSG Company being headed by a Naib Subedar is a clear proof of the destruction faced there. With an economy not in a position to support months long escalation, it makes zero sense to sack one of the most competent commanders Pakistan ever had because he wasn’t able to show the results Pakistan wanted to see. And the truth? Nothing would have impacted the morale of Pakistani Army than the rude sacking of Bilal Akbar, that too, coming exactly at the time Qamar Bajwa is granted an extension as Army Chief.

Here are some of the excepts from the report:-

Second, not since 1971 has the Indian government gone to the extent of pressuring Pakistan as is being done by the Modi regime.
…

2. A Media Coordination Committee (MCC) be constituted including selected journalists plus representatives of the Foreign Office, Ministry of Information, parliament and intelligence to prepare fact sheets and a counter-propaganda campaign against India and to design and promote a media strategy for continually highlighting the Kashmiri freedom struggle.
…

5. There is need to highlight the Indian intervention in Pakistan and in this context the arrest of serving Indian Navy Commander Kulbhushan Yadav should have been and should be raised at various important international forums alongwith the human rights violations in Indian held Kashmir.

8. India’s own fault-lines in their alienated Muslims, Sikhs, Christians and Dalits as well as the growing Maoist insurgency be highlighted. In this context, services of two official think tanks whose principal task is to study India, the Islamabad Policy Research Institute (IPRI) and Institute of Regional Studies (IRS) can be attached to the relevant Committees of the Parliament. Modi and his RSS ideology of Hindutva should be targeted.

9. Comprehensive outreach to those segments of Indian public opinion which are opposed to Modi’s extremism and his anti-Pakistan policies including political parties, media, civil society organisations and human rights groups.

The final straw was the terrorist attack at Pulwama in the then Indian Province of Jammu and Kashmir. It was a point of no return between India and Pakistan. But, situation was still under control.

Situation turned completely out of control when India removed the Constitutional Provision of Article 370 which was supposed to give certain provisions for Jammu and Kashmir but in reality, turned out to be Kashmiri hegemony over other races in Jammu and Kashmir, much to the liking of Pakistan. India removed the article for better integration and development and in a single stroke, by separating the district of Ladakh and making both the entities separate Union Territories, India separated Pakistan Occupied Kashmir Issue and China Occupied Kashmir Issue, enabling it to focus more on each of them.

This sudden loss of control over the narrative means Pakistan had to do something. Neither was it able to make a dent on Indian border nor was it able to create an impact in the propaganda department. While every offensive action of Pakistani Army was beaten back, Asif Ghafoor has become a bigger joke before the eyes of the world by his inconsistent stand. Disconcertingly, he showed something which Pakistan never wanted to show to the world, who is the Boss in Pakistan. His press conference where two Cabinet Ministers, including the Foreign Minister of Pakistan where the Ministers became a side show before a Major General was something unpalatable even to Pakistan. This, along with his shoddy handling of Balakot and the consequent F16 shooting down incident has directly impacted his promotion prospects. It is not a coincidence that Fawad Chaudhury, the Minister for Information and Broadcasting is removed at the same time.

Asif Gafoor despite being a Director General has stooped to a level of a paid troll and has became a subject of heavy trolling and ridicule worldwide. On 28-July 2019 he uploaded a doctored video of war hero and retired IAF Air Marshal, Denzil Keelor.

Ghafoor shared the video on his Twitter and claimed that the war veteran was talking about the ‘Indian failure’ in the aerial dogfight between Indian Air Force (IAF) and Pakistan Air Force (PAF) that took place a day after India conducted the Balakot airstrikes on February 26.

In the video, Wing Commander Abhinandan Varthaman’s clip that was released by the Pakistani military after he was captured, is also visible on the top right corner of the screen. The manipulated video posted by Ghafoor is also interspersed with visuals of a crashed plane.

Fact is that Gafoor’s job is reduced to present a victorious picture of all the failures of Pakistan Army. Many such examples of his goof ups and fall of dignity from the level of DG has invited the wrath of Army head Bajwa. No one will question Bajwa when there is Gafoor to take all the beatings.

Even Qureshi’s competency comes under frequent scanner. Being the head of Foreign Ministry and running a tightly controlled empire, he hasn’t made any mark on India’s diplomatic onslaught. In fact, in an example of collective failure of Pakistani Govt, Qureshi had to cancel Haj and rush home on hearing about India removing Article 370. His attempts to accost the then Indian Foreign Minister Sushma Swaraj and claiming it to be a bilateral meet on the sidelines is all too known. In fact, he personally led the Pakistani charge against India over Article 370 at UNHRC.

Everything seemed random – no one actually linked all of these incidents to the India situation. Realization dawned only after Bilal Akbar is sacked and heads continued to roll with regular frequency.

With every Pakistani act failing before India, the theatre of engagement now shifted to the diplomacy plane. This means Maleeha Lodhi became the face of Pakistan outside Pakistan along with Shah Muhammad Qureshi.

Qureshi attended the UNHRC meet in person. He wasn’t able to achieve anything. The consequence was that, instead of Qureshi resigning, the Head of Mission Tahir Hussain Andrabi was sacked. In fact, Imran Khan himself tweeted, “I commend the 58 countries that joined Pakistan in Human Rights Council on 10 Sept reinforcing demands of int community for India to stop use of force, lift siege, remove other restrictions, respect & protect Kashmiris’ rights & resolve Kashmir dispute through UNSC resolutions,” clearly telling how clueless Pakistan is – it didn’t even know how many members UNHRC has.

Maleeha Lodhi once showed Palestinian photos as that of from Kashmir. Did she do it deliberately or did someone gave her those photos?

She mentioned Boris Johnson, Prime Minister of Britain as Foreign Minister of Britain and deleted the tweet citing it’s a spelling error. It’s an added bonus against her because punishing her for that mistake will help Pakistan avoid sacking its High Commissioner to UK for the rioting Pakistanis did in London.

It is already known that Pakistan’s Foreign Ministry, like every other department is facing serious budgetary constraints. With limited budgetary allocations and an over-aggressive India, it makes no sense to remove the best diplomat Pakistan had in decades at UN and replace her with someone who ironically, is sacked from the same post and carted out of the country due to demands of arrest in a domestic violence case in New York.

In fact, it is understood that Maleeha Lodhi is marked as a target much before – just that people weren’t able to notice in what direction the wind is blowing.

Though Maleeha Lodhi said, “It has been an honour to serve the country & am grateful for the opportunity to do so for over four years. Representing Pakistan at the world’s most important multilateral forum was a great privilege. I had planned to move on after UNGA following a successful visit by the PM. I am humbled by the appreciation I have received for the PM’s visit and the support I have also received over the years. I wish my successor Munir Akram the best of luck!”

and Shah Mahmood Qureshi tried to present a graceful face, “On the completion of her tenure as Pakistan’s Ambassador to UN,  I would like to extend my gratitude to Ambassador @LodhiMaleeha for serving her country with utmost dignity,  diligence and honour. Wish her all the very best with her future endeavours” the writing is on the wall.

It looked as if not many knew of the decision – Fawad Choudhury, Imran Khan’s spokesperson actually tweeted praising Maleeha Lodhi just the day before.

“Have to congratulate @LodhiMaleeha and her team at UNO for organising spectacular visit of @ImranKhanPTI its the team work that earned such huge success and praise.”

“It has surfaced that someone from Maleeha Lodhi’s team leaked a letter written by Pakistan Govt to UN over unfreezing of accounts of Hafiz Saeed. Though it is understood that the details of the letter will be made public only after Imran Khan returns to Pakistan, the letter started appearing in public even before Imran Khan reached US.

Though this caused much inconvenience to Pakistan, this can’t be treated as a valid reason for her sacking as Pakistan is anyways facing far serious allegations – over the treatment of it’s minorities, especially the Hindus, Baloch and Pashtun. In fact, Pakistan faced serious issues trying to address the claims made by the Baloch at UNHRC”

We covered in details about the protests of Baloch and other Ethnic groups at UNGA and UNHRC in our previous articles:-

It’s time for Pakistan to introspect. What’s the point in sacking hard-working employees who failed before impossible odds reinforced by mistakes committed by the troika? Which is more damaging to Pakistan? Imran Khan’s “Bloodbath Rant” or Maleeha Lodhi calling British Prime Minister as Foreign Minister? Shah Mahmood Qureshi presenting a weak case or Tahir Hussain Andrabi failing to get sufficient votes to force a discussion over Kashmir? Qamar Bajwa not providing sufficient reinforcements or Bilal Akbar waging a losing war? This is something Pakistan should fix this with immediate effect before things go further down the spiral. Stop blaming others for the Incompetence of Imran, Bajwa and Qureshi.