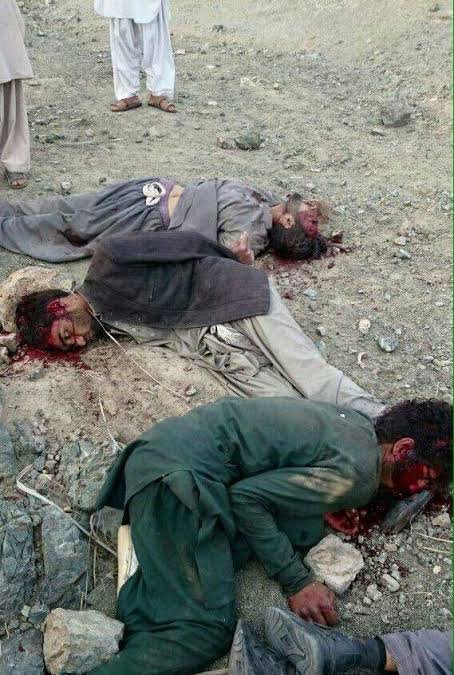 Pakistani Army Continues Barbarism in Balochistan. One person asked, “Does the International Paid Media not consider people of Balochistan as Human Beings? Are we not eligible to Human rights while Pakistan is doing the propaganda for Indian Kashmiri Muslims? Are we not Muslims whom Pakistan is killing? Arabian Gulf world and the OIC that is the champion of Human Rights for Muslims, are the cries of us Baloch Muslims not reaching the Saudi, the UAE, the Qatar and other Muslim Nations? What is it that, when it comes to Balochistan, the whole world including all the International Human rights organizations look elsewhere and deny us our existence which is under threat from Pakistan?”

In our effort to Expose Human Rights Abuses by Pakistan Army, we investigated and obtained a lot of first-hand information from several local sources in Balochistan. There is total Media Blackout in Balochistan. Pakistan has enforced a new order issued by Pakistan’s media regulatory authority PEMRA. It has advised media channels to not air “satirical content” that demeans politicians or individuals associated with law enforcement agencies and especially against Pakistan Army. Several news channels have been closed in Pakistan. Journalists who do not follow the orders have been disappeared in extra-judicial manner and even a few killed.

We received the Monthly report for August 2019 about the Catastrophic Human Rights abuses by Pakistan Army in Balochistan. This report was published on Baloch National Movement (BNM) website on 06-September-2019. BNM is a Baloch nationalist political organization.

Baloch National Movement’s Central Information Secretary Dil Murad Baloch issued the documentary report for the month of August, saying that the aggression of state forces in Occupied Balochistan has continued with intensity. In August, Pakistani forces forcibly disappeared 55 people in 43 different military operations in Balochistan. During these operations, women and children were harassed and tortured; more than a hundred houses were looted.

During the same month, 31 people were killed, including 3 Baloch freedom fighters, who were martyred by ISI agents in the area of Dar-Giss. A Baloch woman was shot dead by forces in Panjgur; the victim woman was sitting in her house as the army opened fire on her from the front post, causing her death on the spot. Babu Nauroz’s son and his grandson fell victims to the tribal wars which are occurring under Pakistani patronage. Nine of the dead bodies could not be identified while the causes of the other 16 deaths could not be ascertained.

Dil Murad Baloch said that the surfacing of unidentified bodies in Balochistan has become part of the norm. The majority of those are of missing persons. A cemetery of these unidentified bodies has been established in Mastung where bodies are buried on a daily basis. This is a deliberate Pakistani act; the bodies are always buried without carrying their DNA test. The main purpose is to hide its war crimes otherwise it could mount to international pressure on Pakistan. Another purpose of avoiding DNA test is to ensure that the relatives of the missing persons would constantly remain in torment. This is a willful attempt to send a clear message to the Baloch nation and to those who are struggling for the freedom of Balochistan that they should give up the struggle for a free Balochistan.

Dil Murad Baloch said that in the last few months some people were recovered from Pakistani army torture cells. On the contrary, continuous military operations are underway in Balochistan, and more people are being continuously picked up and kept in torture cells; houses are being burnt and livestock being looted. These are termed as normal routine search operations, but operation in Balochistan means destructive military barbarism. People are indiscriminately tortured and their villages are destroyed.

BNM’s Information Secretary said that during the month of August military aggression continued in various areas including Awaran, Jhao, Mashkey, Dasht, Kharan, Pasni, Panjgur, Kech and Kohlu. During the military repression, vandalism, and terrorism, the actual damage of these operations is difficult to estimate because there is no media nor international human rights organizations are given access to these areas. Balochistan has been turned into an open prison where the Death Squads are patrolling under the patronage of the Pakistani army and intelligence agencies. The lives, property, and honor of the people are at stake in the hands of these barbaric people.

Dil Murad Baloch said that in another case the Pakistani army has for the first time admitted that a Major involved in ransom extraction for the recovery of an enforced disappeared Baloch youth had been punished. On August 30, 2016, the families of the missing Hafizullah Mohammed Hasani, who went missing by the forces in Chagai’s area, were demanded by a Major of the Army to pay Rs 6.8 million. The victim’s family also paid the said amount but Hafizullah was never released.

This will be the first and not the last because the rules do not make any sense for the Pakistani military, and international war laws and human values ​​are being crushed every day. Pakistan will continue to play the same way with the lives of the Baloch people to maintain its occupation and humiliate the people. The main reason for this being Pakistan is not an enemy from which the Baloch expects it to adhere to human values. Earlier, there were several incidents that the army received money from the people directly or through their middlemen, but such incidents are not reported.

Zafar Baloch, who was missing from Quetta, the army also received Rs 3.5 million. Zafar Baloch son of Haji Ghulam Muhammad Baloch was detained and disappeared by the army from his house on July 24, 2015. Zafar Baloch was released in March 2019 after the army received a large sum of money. But it is not the same at every case; sometimes despite paying the ransom, people remain in prisons.

It should be noted that the army is receiving ransom from the victims of enforced disappearances in Balochistan but people are reluctant to come forward due to the threat and fear of the army. Along with other atrocities, this malicious and inhuman act of accumulating money from the families of missing persons is happening in full swing.

Dil Murad Baloch said that Baloch nation is going through its most difficult time. The enemy is bombarding on a daily basis. Balochistan has been turned into a hell. It is the national and human responsibility of every member of the Baloch nation to raise their voice against this cruelty, perform their national duty, as well as the international human rights organizations, that they should go ahead and take notice of Pakistan’s war crimes and play the role which is guaranteed in their manifesto.

In a series of tweets by Sabah Kashmiri twitter handle @SabahKashmiri, she shared a couple of videos and Recorded messages on 14-August 2019 from Naela Qadri, a Baloch Kurd liberation activist, feminist, writer, film maker, President World Baloch Women’s Forum. Here is the link to the tweet

In a recorded message on 14-August 2019 (Independence Day of Pakistan), Naela Qadri delivered a message for the International Community. She said, “Nation is under occupation of Pakistani artificial state. Pakistan is created on 14-August, today. It was a day for creating today’s terror. That terror is changed into Nuclear Terror today, in the duration of 70 years. This is wrong policies of new colonialism and imperialism. This is a kind of a proxy state in the heart of South Asia, just to create unrest and to create unstability in the region. Pakistan has served that with its Mercenary army that is always ready for any wrong or for any kind of action just for dollars. Pakistan is a country that needs to be undone. This country has created a present for people living in Pakistan. Christians, Hindus, any kind of religious minorities, any kind of people other than the Lahori Punjabis, all the people living under occupation of Pakistan, Baloch, Pashtun, Sindhi, Saraiki, Kashmiri, Gilgiti, the Mohajirs that created Pakistan, even they are in torture cells. Pakistan is a “Concentration Camp” for humans for people, for nations living under its occupation.

Balochistan was a “Sovereign Country” and Balochistan was occupied by Pakistan after its one year of creation of this Artificial Country. So today we appeal to the international community, we appeal to United Nations, we appeal to all the people who believe in liberation, who believe in peace, who believe in humanity. Please stand up. Please join hands with the Baloch people, please join hands with Pashtuns, please join hands with Kashmiri, Saraiki. Pakistan is Killing each of us. Pakistan is depriving us from our best people. They are taking our Engineers, our doctors, our journalists, our women, our children and they are torturing them. They have “Rape Cells”. It’s a shame for the world that Pakistan exists. It is a shame for Humanity that this kind of states exist on earth and they are supported by other states. Look what Pakistan is doing with us. They are trading our Organs. They are Torturing us. They are selling our lands. They are depriving us from everything we have given to us by Nature. This day is the day of mourning. This is the day that this dragon is created, this monster is created for all the Terrorism that people are facing is due to Pakistan. All the roots of terrorism you can find in Pakistan. If you want to make this world a peaceful world, we have to ‘Undo Pakistan’.”

We further enquired from people in Balochistan and the truth we found was devastating. Police does not allow any reports to be registered when a dead body is found. Police does not allow Post Mortem of the dead bodies found to be conducted, from the fear of exposing Pakistan Army human rights abuses, if organs were harvested from these dead people.

We got information shared by Kahaan Baloch. He shared some of the disturbing pictures of Pakistan Army Human Rights Abuses. In his tweet he shared some distressing images how Pakistan Army continue its Barbarism. The images showed Baloch people shot at point blank range in the Head. We are posting it because the whole world is unaware of what the Islamist Radical Pakistan is doing to Ethnic Baloch Muslims in Balochistan.

Imagine an area more than 1.5 times the size of UK, almost equal to the size of Germany, 347,190 square kilometres (134,050 sq mi) of Balochistan, which is 44% of Pakistan’s total land mass, without Internet facilities from the fear that people may not upload videos and pictures of horrific crimes of Pakistan Army Generals. Pakistan is killing people just to vacate their lands and sell them to Chinese for exploiting the mineral rich land.

As per the people, if the International Community does not intervene, that day is not far when whole Balochistan Ethnic Nation which is predominantly Sunni Muslims will be wiped off by Punjabi dominated Pakistan Army and their lands and resources are sold to Chinese.

We are posting some of the tweets and images posted by Kahaan Baloch to bring the attention of International Human Rights organizations and leaders of various countries to this Catastrophic Human Rights Abuses by Pakistan Army in Balochistan. Kahaan Baloch feared that Pakistani troll army can get his account suspended and his life may be in danger. Hence, we are posting screenshots of his tweets and the images he posted for the readers.