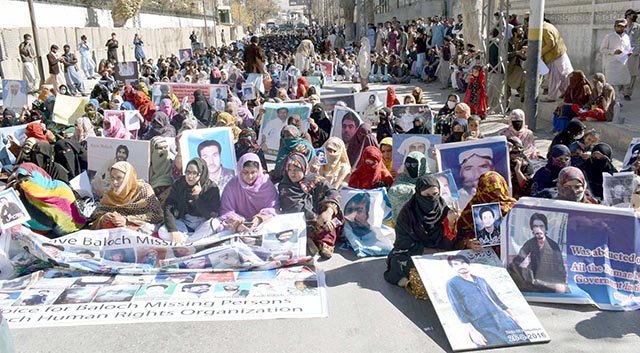 We further enquired from people in Balochistan and the truth found was horrific. Police does not allow any reports to be registered when a dead body is found. Police does not allow Post Mortem of the dead bodies found to be conducted, from the fear of exposing Pakistan Army human rights abuses, if organs were harvested from these dead people.

The Information & cultural secretary of Baloch National Movement (BNM) Dil Murad Baloch published the monthly report of July and stated that there have been many claims of Baloch Missing persons being released for the last few months but if we just look at the report of July then we will be able to comprehend the fact that it is a false claim. Based on the ratio of new enforced disappearances and released persons one can easily judge whether enforced disappeared people are being released or more people are being abducted.

He said, “just a glance on the statistics of July show how horrifically Pakistani forces have been carrying out enforced disappearances without any impedance. There were 81 forcibly disappearances in this month and another 30 dead bodies were recovered from different parts of Balochistan. Six bodies were recognized to be of those people who were enforced disappeared and then killed by the Pakistani forces, but the majority of the bodies were mutilated beyond recognition. The fact that the dead bodies were mutilated beyond recognition shows the vast brutality and unbearable tortures the army carries out. This has been continuing for the last 2 decades.”

He said, “the operations were continued in every nook and corner of Balochistan extending from Makuran to Kohistan Marri. In these 80 military operations, the Pakistani security forces looted more than 150 houses and took away more than a hundred livestock from shepherds.” Does it mean that Pakistan has become so bankrupt that they have started robbing people of their livestock for feeding the Pakistan Army?

“Ironically dead bodies are being found daily but the state in the modern era did not bother to test the DNA of a single unknown dead body. After such an injustice, any conscious person can easily measure that the dead bodies were among those missing persons who had been abducted by the Pakistani forces during different military operations. They have been tortured, killed and then thrown to the desolated places.”

Dil Murad Baloch continued and said, “some parliamentarian parties are trying to take credit for the returning of missing persons, but they should have the moral courage to inform the nation that where were they kept for such long time? Under which law they have been abducted?”

“Unfortunately, those credit seekers have no such moral courage to tell the nation that where they have been kept for many months or years after they have been disappeared, even the recovered persons are unable to speak about the horrific and inhuman torture they have faced.”

“It is also not less painful for the Baloch nation that some people use this tragedy for their political interests. In spite, this human tragedy, beyond this is being used politically to crush Baloch nation and Baloch national struggle. This is unacceptable and a moment of shame for them.”

“All such elements will face accountability of Baloch nation.”

If all this game is to secure Pakistan from Baloch anger and hate, then definitely they will not be able to tell the nation where they have been kept and why they have been barbarically tortured.

He said, “Every week someone announces that tomorrow two people will be released. Where from are they are getting this information? This information proved that you Parliamentarian politicians are the counterpart of Pakistan in all this process.”

Dil Murad Baloch further said, “the Baloch voice has reached in every corner of the world. Recovery of a few people out of thousands is not due to efforts by parliamentarians but it is because of international recognition of the Baloch national struggle.”

Dil Murad Baloch said, “it has been very important for solving this human tragedy that the international human rights bodies must take immediate action and fulfill their basic responsibilities.”