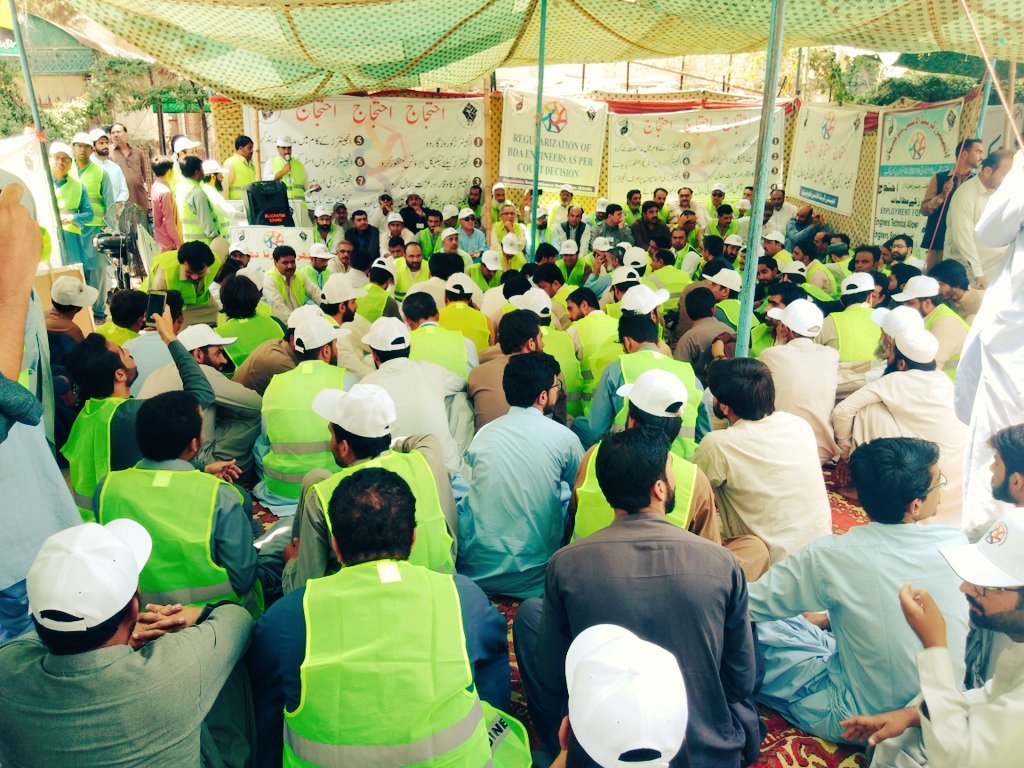 Balochistan has come to a standstill and people are protesting the government policies. Engineers are on strikes because of unemployment and Engineering Jobs given to non-technical Punjabis and those close to government. Medical students are protesting by holding medical classes in camps on the road as the Government has de-recognized 3 Medical Colleges. Pharmacists are protesting as there are no jobs for young pharmacists. Government has not announced a single vacancy of Pharmacists in last 5 years. Workers in Saindak mines are protesting against low wages and lack of medical facilities by Chinese Mining companies. Teachers were also protesting however government agreed to half of their demands and the protests were called off.

Thousands of Engineers are protesting peacefully in a unique manner by wearing Engineering jackets and caps throughout Balochistan. It is a well disciplined and organized agitation by Engineers from Balochistan.

In order to crush the protests, organized by Minority Baloch Engineers, Government of Pakistan has imposed Section 144 in Quetta, Balochistan. It makes a large assembly of people as illegal and they can be arrested

As per the above order, Supreme court had ordered to remove all B-Tech(hons)/Diploma holders posted as Executives/Deputy Directors/Agricultural Engineer/Design Engineer/Senior Engineers/Research Officers from their posts.

BEA had been protesting for the removal of the non engineers and non-technical staff working as sub-incharge and Assistant Engineers be removed and replaced by the qualified Engineers in Balochistan Development Authority (BDA). However Punjabi dominated Pakistan Government did not follow the orders and the jobs that were supposed to be handled by qualified Baloch engineers are given to non-technical Punjabis or people favoring government who could offer big bribes. Despite repeated request by the Balochistan Engineer’s Association (BEA), the demands were not fulfilled

As per the BEA sources, thousands of qualified minority Baloch Engineers are jobless while the same jobs are given to non-technical staff. As a result, the project that could have been completed in 1-2 years are still work in progress even after 10 years.

In Quetta qualified Engineers are on strike in front of the Quetta Press Club. However, because of the media blackout, no news channels or media houses published any news for minority Baloch for the fear or a ban by Pakistan authorities and the fear of abduction and disappearance and targeted killing of anyone raising voice against the government’s policies of exploiting Balochistan for natural resources while at the same time settling Punjabis to alter the demographic composition of Balochistan.

There is still hope in some Balochistan engineers that the Pakistan Government will give them their constitutional rights, even though they have been denied their rights since last 70 years of the illegal occupation of Balochistan by Pakistan.

As per people of Balochistan, there is no water, there is no education, there are no jobs. Families of politicians and Pakistan Army generals are living abroad and leading luxurious lives, whereas people in Balochistan do not have even the basic needs like the drinking water.

There is one more demand of the protesting engineers. One of the engineers of Engineers Grand Alliance Balochistan (EGAB) Feroz Baloch along with his cousin were disappeared by Pakistan Army since May 2019 for raising their voices against Pakistan government and raising the demands for basic rights and removal of the non-technical staff on Engineering posts. No one knows the fate of the missing engineer. People fear that they may have been killed by the tyrannical army of Pakistan.

Three Medical colleges of Balochistan namely, Makran, Jhalawan and Lorlai Medical Colleges, which after announcing admissions and selecting students refuse to start classes because of de-registration of Colleges through PMDC. Those medical students are attending lectures on road given by Balochistan Students Action Committee (BSAC) since last 7 days. BSAC has started the classes on Road for Medical Students who were selected in the three Medical colleges.

As per the BSAC spokesperson, the future of the youths is at the stake. There is already a Freedom movement in Balochistan to get Freedom from tyrannical rule of Punjabi dominated Pakistan. By de-registering the three Medical colleges, the Government of Pakistan has created more distrust. People are losing all hopes from Pakistan Government.

Medical Students are on hunger strike and are demanding an end to discrimination against Balochistan. Despite the efforts of Government of Pakistan to deny Baloch minorities of the education, these medical students are getting their education on the road. However because of Media blackout in Pakistan, their voices are not reaching the world.

Zehri Baloch, a social activist from Balochistan, visited the camp of Medical students and said that it is  trend that Sardars and Nawabs are responsible for every problem in Balochistan. As per people the real reason is that Punjabi people do not want Baloch people to grow. They want Baloch to remain in perpetual backwardness so that they can exploit Balochistan resources and live luxurious while Baloch people remain in poverty.

Ex-Chairman of BSAC also visited the camp of Medical students and expressed his views and suggested to continue the struggle. He added that without struggle we cannot achieve anything. He called for a continuous struggle in Balochistan to fulfill basic needs such as water, roof and education.

Fresh Pharmacy Graduates are on the roads as well in Balochistan for last 35 days on a hunger strike. As per sources 1200 Pharmacists are unemployed despite completing their courses.

Workers of Saindak copper-gold project in Chagai District of Balochistan are on strike. They demanded an increase in their salaries.

The labourers boycotted their work and said that their salaries should be increased. “Some people are making less than Rs15,000 a month,” said one of the protesters. Their life is always at risk for this small salary.

Metallurgical Corporation of China (MCC) and state-owned Saindak Metals Ltd (SML) had signed an agreement under which the Chinese firm will continue operating the Saindak copper-gold project for another five years on existing terms. The lease extension will remain effective until Oct 30, 2022.

The employees demanded other facilities such as a medical allowance and holidays too. “We have not been allowed to form a union too,” another protester said. More than 1,600 people are working on the project.

They warned that they will continue to protest until their demands are met.

We got a video showing a Baloch Politician blaming China for exploiting the mineral resources while paying only 2% of the revenues. As per the politician, this was the day light robbery. Gold, Silver, copper of Balochistan is being looted by China. As per him even if the government of Pakistan would have asked the Chinese companies to pay for rental for the 50 Megawatt electricity plant, the rental for the Water purification plant, rentals for the warehouses, Balochistan would have earned millions of rupees over a period of 17 years.

People of Balochistan are living in poverty while all the Gold, Silver, copper from their lands are going to China while people who own the lands are

Voices for Freedom of Balochistan

As per Baloch sources, Baloch people will not get any basic civil rights without a struggle and they should continue their struggle for freedom from Pakistan. Until they get freedom from Pakistan, this exploitation of Balochistan will never end. As per them, because of this decades of exploitation, Baloch do not trust the Punjabi dominated Pakistan Government. Also since Pakistan is bankrupt, they do not believe the government will fulfil any of their demands.

There is a call given by different groups calling for a unity between all Doctors, Engineers and Pharmacists to continue their protests. As per them the Punjabi dominated government will continue to exploit Balochistan and unless they all unite in the struggle, this exploitation of Balochistan will continue. As per them, a person spends years and a lot of money in getting education and finally becomes a Doctor or Engineer or a Pharmacist. However because of lack of employment, they are unable to payback their education loans. Because of lack of denial of higher positions to senior Engineers, they are disenchanted with Pakistan government.