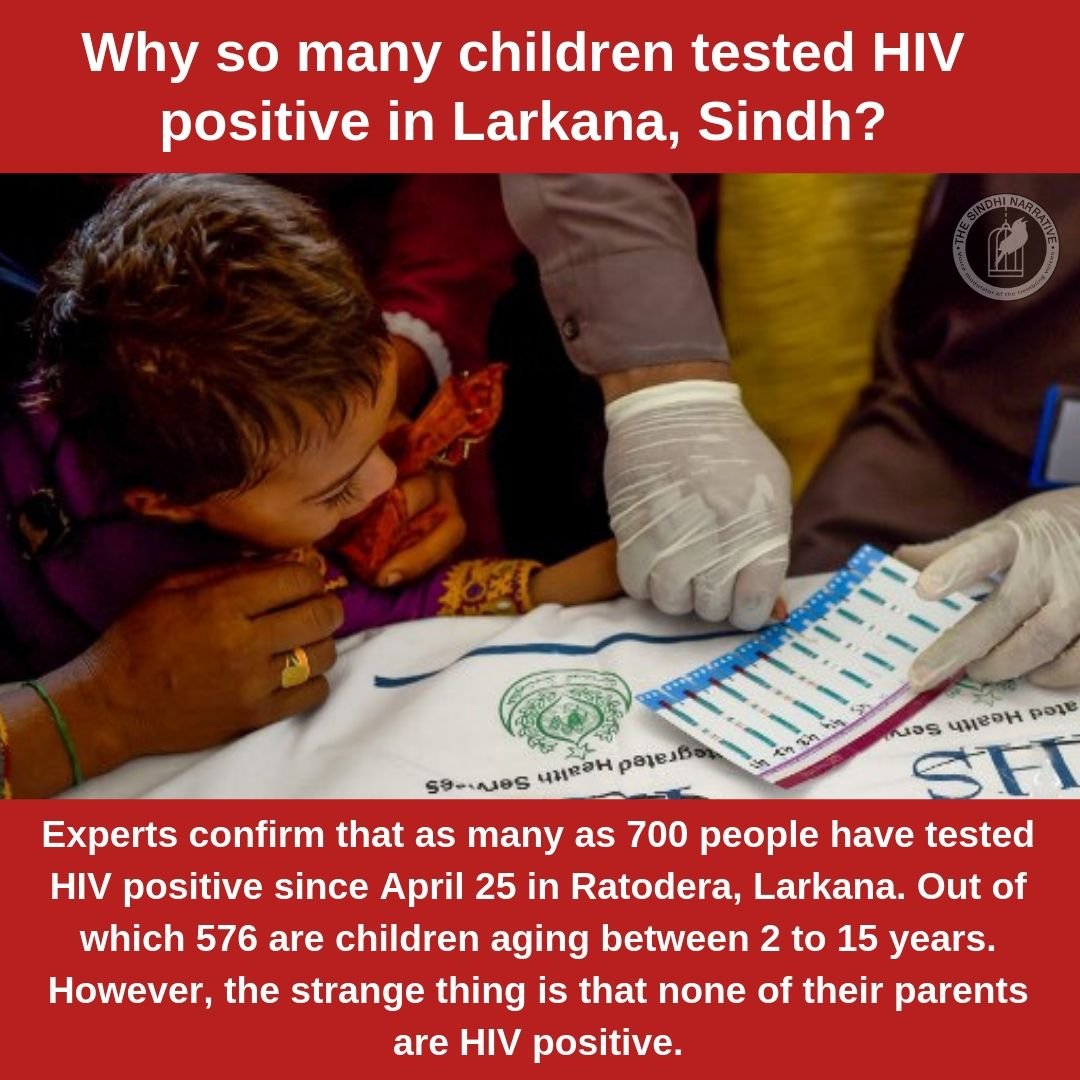 Increasing Number of HIV cases in Ratodera in District Larkana, Sindh give an impression as if Pakistan is committing selective Genocide of Mohajirs.

Experts confirm that as many as 700 people have tested HIV positive since April 25 in Ratodera, Larkana. Out of which 576 are children aging between 2 to 15 years. None of their parents are HIV positive. What could be the reason for this huge number of HIV Positive children?

United Nations has declared Pakistan as the second fastest HIV growing country across Asia. As per Eamonn Murphy, Regional Director of UNAIDS for Asia Pacific, “Unsafe injection practices including reuse of syringes and IV drips, both by doctors as well as quacks in addition to poor infection control have emerged as the leading causes of HIV outbreak in Ratodero area of Larkana District in Sindh”

In 30th May 2019, a Dr. Muzaffar Ghanghar who himself was an HIV patient, was employed in a Govt Hospital in Ratodero district of Larkana was arrested. He was allegedly responsible for spreading the Human Immunodeficiency Virus (HIV) among the patients.

A month later the said doctor was cleared of deliberately injecting his patients with HIV but found guilty of criminal medical negligence. JIT’s findings refute initial claims that he had deliberately injected his patients with HIV as a form of revenge. However, there are different voices raising the question that the practice to reuse syringes and IV drips is followed in entire Pakistan. Why did this particular area got so many instant cases of HIV positive?

Mohajirs and Sindhis in Sindh have started questioning the Government of the conspiracy. They also say that even despite the government knowing about the infection being spread at this large scale, they didn’t provide enough medical assistance to tackle this epidemic. People are questioning why over 500 children only in that locality tested positive for HIV if the intention was not to deliberately infect them with HIV? It should be noted that Sindh region in terrorist nation Pakistan is fighting for Freedom. All Mohajirs and Sindhis are coming together for freedom of Sindh from Pakistan. Those children tested positive for HIV are poor Mohajirs. People claim that it is Pakistan Intelligence Agency ISI behind this epidemic. As per locals, it is a conspiracy to infect the dissidents with deadly virus. Non-Punjabi Minorities are questioning, why none such incidents happen in Punjab in Pakistan?

According to an estimate there are estimated to be more than 100,000 HIV-positive people in Sindh alone. However, the Aids Control Programme has only 10,350 registered patients who are provided treatment.

According to WHO, Pakistan is registering approximately 20,000 new HIV infections annually, the highest rate of increase among all countries in Asia.