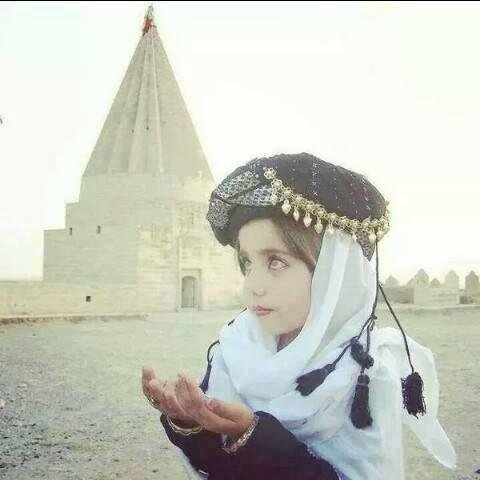 In this article we have attempted to present the Yazidi Culture which is entirely a unique culture, totally different from Islam or Christianity. There are many resemblances with Hindu Culture. We appeal the world to recognize Yazidi plight and help Yazidis in settling in a peaceful environment where they can follow their unique Yazidi Culture without any oppression and hindrance and grow.

The Yazidis believe in one God (Xode) and Seven Angels. They also believe in four sacred elements: fire, water, earth and wind. During prayer the Yazidis should face towards the sun, which is one of the reasons why they were often called “Sun Worshipers”.

The Yazidis believe in rebirth of the soul, which plays a major role in Yazidism and is called (Kiras gorin = changing shirts).

The Yazidis themselves claim to be members of one of the oldest world religions.

Due to the continuous threats mostly from Muslim groups to the Yazidis, they have become closed community, which has also led to many untrue accounts about them being published in the literature.

Yazidis were, and still are, considered by radical Muslims as “Devil Worshippers” and are not regarded as “Followers of the Book”. Because of the pressure of being forced to convert to Islam, Yazidis retreated to the hills and had only limited contact with other religious groups.

Yazidi religion was passed on orally by the priests, therefore the history of the Yazidi is an “Oral History”. There are very few written documents by the Yazidis about themselves and this has been changing in the last 50 years.

Misconceptions about Yazidis that lead to their Genocide

In the 10th century the Arabian historian Al-Samani (1166) in his book “Al-Ansab” describes that the Yazidis are loyal to Yazid Ibn Muawiya, the second Ommayid Caliph.

In some communities this false assertion is still held today and has often been used as an argument and justification for plundering and enslaving the Yazidis.

Since that time, and even today, some Shiites believe that the Yazidis, as followers of Yazid Ibn Muawiya, killed the prophet Ali’s sons Hasan and Hüssein, who were to be Mohammed’s successors.

Yazidis have suffered countless reprisals, persecution and have fled from the Muslims on many occasions.

There were no Yazidi missionaries as Christians or Muslims.

Sheikh Adi’s arrival amongst the Yazidi community in the 12th century did not only have religious significance.

Setting up the caste system changed the whole structure of the community.

The relationship of the groups to each other was re-defined. There were the Sheikhs (teachers) and the Murids (lay people, the people). The existing group of priests (Pirs) lost their position as the main instructors in the Yazidi religion.

Many of these rules have been destroyed because of the terror and the Yazidis were forced to convert to Islam, this happened not only with the ISIS but with the overall Islamization of the Middle East.

74 genocides against the Yazidis have been carried out during the past 1200 years by Islamic groups & states.

According to an estimate, some 1.8 million of Yazidis have had to convert & some 1.2 million Yazidis have been killed by different Radical Islamist Groups and rulers.

Since 2007, hundreds of Yazidis in Iraq have been murdered by the terrorist group Al-Qaida. Even today they are ostracized and must suffer reprisals from the Muslim majority.

Thousands of Yazidis have been killed, 1000s of families have been held hostage in their villages & if they didn’t convert to Islam they got murdered.

1000s young girls have been abducted, raped & sold in Arab markets and enslaved, when the Islamic State invaded Sinjar at the beginning of Aug 2014.

At the same time, in addition to destroying the infrastructure, the Islamic State (IS / ISIS) terror is systematically trying to destroy a complete community, of which the UN declared these acts as genocide against Yazidis.

In the village of Kocho more than 400 Yazidi men were executed on August 15, 2014. After that, the older women, women with children, married women without children, young boys and girls between 8 and 14 years had to form groups and were taken to various locations.

Older Yazidi women and women with children were interned in mass accommodation or in villages near Tel Afar or Mosul. They were guarded by ISIS fighters, humiliated, beaten, raped.

Every evening not only ISIS Terrorists, but also male civilians from Syria, Saudi Arabia, Egypt, Qatar, Tunisia and other countries turned up because they wanted to buy the Yazidi women and take them away with them.

Women are being forced to convert to Islam & to pray

Yazidi children are being brainwashed, drilled, exploited & being brought up to be brutal, even towards their own families.

In camps they are trained to beat other children, to crucify them, or to bury them alive if they do not adhere to ISIS demands.

Yazidi Appeal to the world

Since the Yazidis do not see any hope of a peaceful life in Iraq, they are trying to leave the country, above all they want to go to Germany because there is a big Yazidi community in there (all emigrated from different country to Germany). Yazidis should be settled at one place where they can practice their Yazidi Culture freely without any hindrance.

UN and world leaders should come forward and work towards settling all Yazidi at a place where they can lead their life peacefully and practice their unique Yazidi Culture. Instead of inviting Islamist Radicals, Yazidis are true deserving refugees. Germany should be called upon to settle these Yazidis and give them a respectful life.