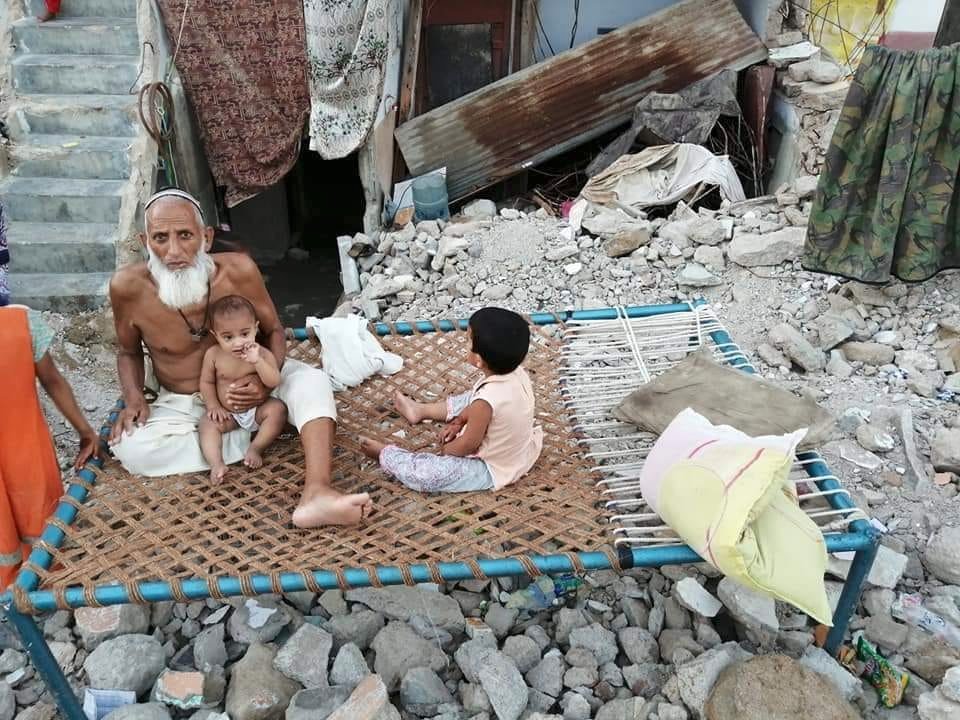 On the day of Eid, Building authorities came along with Police and Pakistan Rangers and demolished hundreds of houses belonging to poor Sindhis, Mohajirs, Christians and Hindus using bulldozers. No prior notice was served to the poor people, nor were they given any time to vacate their houses. All their household items including refrigerator etc were inside the houses when the Building authorities demolished hundreds of houses on the day of Eid which is a Muslim festival.

Here is a video of an old Mohajir minority women telling how her house was demolished without giving any notice and without even giving time to remove the valuable household items from the house. She said her whole life’s earning is gone and now she is on road along with her 2 sons and their families whose houses have also been demolished.

Here is another video obtained. This old minority Mohajir man also has a same story. He said he begged them not to demolish his house as he is old and has no other place to go. But they didn’t listen and demolished his home. Now he is homeless.

People are questioning the Pakistan government. They are saying why the authorities are targeting only the minorities and why not the Punjabis. It must be remembered that earlier a government doctor was responsible for spreading HIV among over 500 small children in Larkana district in Sindh. People are calling it a systematic genocide of Sindhis, Mohajirs, Christians and Hindus in Sindh.

Altaf Hussain, leader of Mohajirs in a video address said, “Since Pakistan was made, especially aftear 1992, Karachi in Sindh, completely went in hands of Pakistan Rangers. He questions Pakistan Rangers, “why did Pakistan Rangers never remove any illegal vendors in 27 years? Police, Building Authorities, Karachi Metropolitan Corporation (KMC) all have orders to remove anyone illegally occupying government land, if there is an illegal occupation. If there was an alleged illegal occupation of government land by the people, it was with the permission, will and connivance of the Police, Building Authorities and KMC and not against their will.”

He lambasted Chief Justice of Pakistan and said, “Chief Justice, you have demolished houses of poor, you have made mothers, sisters, old people to cry. Urdu Bazar that was famous in whole world where the books imparting knowledge were sold, everyone seen it from years, you have destroyed it as well?” He further says, “There is another Army Establishment conspiracy to make Mohajirs destitute and migrate punjabi people from other distant places and settle them in Karachi like Taliban who can fight minority Mohajirs and establish their supremacy.”

As per some people on the ground in Karachi, Sindh, because of the kind of attitude from government/army/ paramilitary forces of Terrorist Nation Pakistan shown towards minority Sindhis, Mohajirs, Christians and Hindus, very soon Pakistan will be divided and new nations will be born. They are advocating for complete Independence of Sindh from the occupation of Terrorist Nation Pakistan.