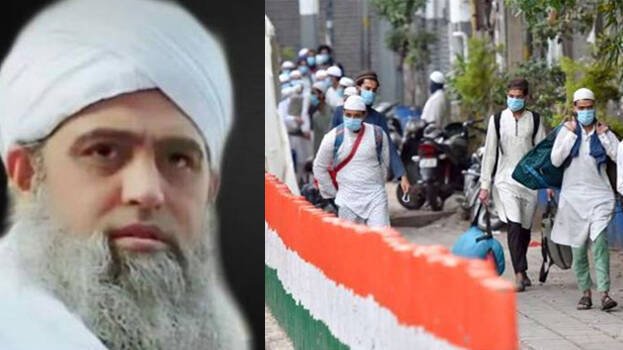 Panic grips Tablighi Jamaat. Maulana Saad, the head of Tablighi Markaz(S) is on the run. Even two months before, no one would have dreamt that one of the most powerful persons in the world will be stuck in such a situation. Though superficially, what’s happening with Tablighi appears as malice, a close look into the events proves that it’s not malice but panic. And you won’t have a better proof for that than Maulana Saad fleeing.

However, getting into a panic mode doesn’t absolve them of their past or of their agenda of hate. In fact, even those who are put under forced quarantine are behaving as if they are acting out of sheer malice, which, unsurprisingly, is not unexpected. On the other hand, look at the speeches given in the recent gathering itself.

Maulana threatens media for coverage of Tablighi Jamaat as they spread Coronavirus, says ‘India will be in trouble if we show our true colours’

The cleric claimed that Jamaat is benefiting the country by bringing in foreign currency, and good publicity to India from all around the world. The organization has its reach in the smallest and remotest corners of the country and its goal is to bring the Muslims on the right path, said Rahman.

“If you interview any Jamaat member…you will find out he used to be a big-time criminal…if these people come to their asalaiyat (reality), you will be in a lot of trouble. I want to warn you, I want to tell the media”, he said.

Clearly, they knew they are infected but their hatred for Modi overcame their love for preservance. Tablighi Jamaat’s links to global terror and that it is banned in countries like Saudi Arabia, Russia is all too known.

Check the article Tablighi Jamaat: Jihad’s Stealthy Legions which talks about the involvement of Tablighi members worldwide in Terror activities.

So, the question which needs to be posed is, why is Tablighi Jamaat behaving the way it is behaving.

Speaking to a source in Delhi, he forwarded us this tweet that mentioned that Delhi Police had sent a 26 question questionnaire to Tablighi Jamaat boss Maulana Saad. In order to avoid answering the questions, Maulana Saad absconded.

This is a classic case where a full shoal of fish went into a panic mode. If you look at it closely, you need men on ground to spread anti-India agenda in the world. Who is the brain behind this anti-Indian thought is anybody’s guess. Is it Pakistan? Are they locals?

Now, if the main batch of cross-border travelers is snuffed out in a single go, the whole anti-Indian ecosystem in Islamic world will collapse suddenly and the interested parties can’t build an outrage narrative there. This is not about an average Muslim in India.

Now, Indian Government turned it’s eyes at them, the whole ecosystem went into a panic mode. It’s not malice, but panic – panic because they can’t spread their malicious agenda. A fine line difference. What do they do?

Scatter the foreigners all over India and assign a local community to guard them. That’s exactly why there is that huge a resistance whenever a locality is raided – and that’s everywhere. And that’s why not many are voluntarily coming out – because they are the local influencers who are guarding the foreigners from Indian govt. Those who are coming in open are either without any responsibilities or they chickened out.

Lets look at the different dates of different Ijtema

We covered in details about the Nepal Tablighi Jamaat Ijtema  in our previous article titled Anti-Hindu Riots In New Delhi Were Planned In Nepal.

However later, Indonesia Shura Elder Ustad lufti has passed away due to the Chinese Virus, however the cause of the death notified was Cardiac arrest.

Dates in which Ijtema was held at Grand Masjid Al Hassanah in Sangai Rambai, Malaysia on 23,24,25 March 2018

Here are some of dates of the Ijtema.

Why is Tablighi Jamaat Responsible a Super Spreader of Chinese Virus?

A South African Muslim cleric, who recently returned from India after attending the Nizamuddin congregation, has died after contracting the novel coronavirus, according to his family members. Moulana Yusuf Tootla, 80, attended the March 1-15 Tablighi Jamaat congregation in the Nizmuddin area, that has emerged as the epicentre for the spread of the coronavirus in different parts of India and abroad after thousands of people took part in it.

On 29 March, Indonesia Shura Elder Ustad lufti has passed away due to Chinese Corona Virus.

Clearly, the questions which Saad is expected to answer are a hint that Tabligh is really cornered.

In fact, it is already known that Tabligh is famous for massive gatherings at regular frequency, the sad fact being they are conducting the meetings even after they tested positive. While Malaysia’s meet led to explosion of cases in Malaysia, Indonesia, Thailand, Brunei, Pakistan, Kyrgyzstan and Palestine amongst other countries, it has come to known that at least 1500 people from India attended the meet.

Combined with Indians in Malaysia who were infected and foreigners in Delhi’s Tablighi meet, India is in an unenviable position where more than 50% of its cases is tagged to one single event.

Most of the confirmed Chinese Virus novel coronavirus cases in India have been linked to Islamic sect Tablighi Jamaat and its gathering in Delhi last month. Such cases had been detected across 17 states and union territories of India.

Of the total 561 cases in Tamil Nadu, 522 got infected with the pandemic virus after attending the Nizamuddin congregation in Delhi.

Tamil Nadu is one of the worst affected by Coronavirus positive cases traced to the Delhi Aalami Markaz Nizamudding event. The State government said that it has so far screened 1,246 of those who attended the Tablighi Jamaat congregation.

25/26 cases of Assam, 140/161 from Andhra Pradesh are because of the same event. One can understand the scale of impact their activities had all over India.

Though it is clearly visible that the organization is acting in panic, the activities of those who are arrested clearly shows malice – clearly hinting at their long term agenda.

In Jaipur, 39 persons living in the same colony, tested positive for the Chinese Virus. 18 of them were Tablighi Jamaat Muslims.

One such cluster of almost 89 Tablighi Jamaat attendees who have been quarantined in the Isolation Center at Madhu Resort in Sikandra space, Agra, after police caught them holed up in almost eight different Mosques in the town, have been throwing quite a lot of tantrums, making it difficult for the medical staff to attend to them.

According to media reports, these members of the Jammat have refused to consume the healthy non-spicy food prescribed to them by the doctors, instead, they have been making preposterous food demands like spicy beef biryani.

They are, reportedly, threatening the medical staff that if their demands are not met they would not consume medicines, nor would they allow the doctors or nurses to treat them. They have also warned that they would run away before the required 14-day isolation period.

These people have been completely disregarding the social distancing norm. They are offering group Namaz and roaming around freely in large groups. Visitors have been walking in freely into the resort, getting these Jamaatis outside food and drinks.

Besides that there are many news from all over the country.

There were allegations on a Delhi Police constable who was trying to help Tablighi Jamaat members to cross the border.

Recently there were announcements made over loudspeakers in the Migrant Colonies and Liberal/Leftist Delhi State Government’s Ministers were involved in the conspiracy to send lakhs of Migrant workers living in Delhi to the Delhi border. A temporary situation was created where in the workers started walking on foot towards their home towns despite the lock down. It all started after a notorious Anti-India Journalist Barkha Dutta interviewed a couple of Migrants who were walking over the foot to their home town due to the complete lock down in India.

Was that interview of Barkha Dutta giving an indication to the vested interests to create a migrant crisis at the border which can work as a smoke screen for Tablighi Jamaat members to escape Delhi? We were told that there are instances in the past when Barkha Dutta allegedly passed the information to Indian Enemies during Kargil War, attack on Hotel Taj, Mumbai, and planning riots in Delhi. Hence this tailored exhodus is not a big deal to let suspect Tablighi Jamaat members escape Delhi in the crowd of migrants at the border.

Why did they want to escape Delhi? What were they hiding? Why did Maulana Saad had to flee? How many Tablighi members including foreigners had fled Delhi using the migrant crowd at the Delhi Border?

In view of all the allegations mentioned above, role of Tablighi members in terrorist activiies world wide, planning of Delhi Riots during President Trump visit in India during Nepal Ijtema of Tablighi Jamaat, Recent ruckus created by Tablighi Jamaat members spitting and urinating outside the toilets and spreading virus among the other patients in the hospital, Should Indian government ban Tablighi Jamaat Ijtema?

Is India planning to take any strict action against the Tablighi Jamaat members who are creating ruckus in Hospitals by spitting around, urinating outside toilets, walking around naked in front of healthcare staff nurses, threatening the doctors and health staff, refusal to take medicine, threatening to escape, group namaz in Hospitals, frequent visitors in the hospitals?