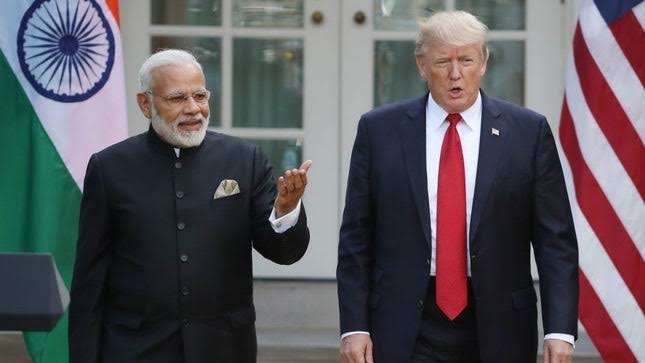 As per reliable sources, it is learnt that the Leftist, Liberals and the Jihadists in India in collaboration with Democrats in the US plan to cause major disruptions and demonstrations in all over India to oppose President Donald Trump visit to India.

After the last visit by Indian Prime Minister Narendra Modi and the Grand welcome he got during the Howdy Modi event, an Invitation was extended to the US President Donald Trump which he accepted.

We covered the Howdy Modi Event in our previous article Without Naming Pakistan, India US Vow To Fight Radical Islamic Terrorism: Howdy Modi

As per a tweet by a Leftist Liberal Twitter ID @Loneranger9new with location as Vermont, USA that belongs to a Leftist Liberal, she tweeted yesterday, “Every secular Muslim citizen must be on roads for a peaceful protest during #Trump’s visit to India. Placards should appear from the airport itself with #GoBackTrump written on it. CC: @BernieSanders”

As a result of this call to the Muslims, Delhi witnessed heightened violence by Jihadists on the streets. These videos will show the level of stone pelting by Jihadists in some parts of the Delhi.

Some of the handles tried to give a piece of advice to Hindus who came on streets unorganized against an organized mob of Jihadists.

As per reliable sources, Pakistan ISPR has floated thousands of social media handles with Indian Names with pictures of Hindu Gods and Goddesses and running Anti-Trump propaganda to give a picture that People in India do not like the US President Donald Trump. Some of these handles are inciting Hindus to come on the streets to counter the Jihadists while some are talking against the Ruling BJP party led by Indian Prime Minister Narendra Modi. Some of these Pakistani Fake handles with Indian names are simply abusing the US President Donald Trump in order to give an impression that Indians are abusing President Trump and thus malign the Image of India. Here is an example of a Fake Pakistani Twitter Handle with an Indian ID giving the impression that an Indian is abusing President Trump: –

Last couple of months Jihadists protesters in the name of protests had blocked the highway connecting Delhi with Noida thereby increasing the travel time for daily commuters to 3 hours within a small stretch of road. Readers should also note that recently a leftist Liberal Political Party called Aam Aadmi Party AAP got re-elected that has the support base in all these Muslim areas and will not let any police action against any Jihadists.

Narendara Modi also solved the Ram Janm Bhoomi (Birth place of Lord Ram) issue wherein Supreme Court of India ruled that the place of birth of Hindu God Lord Ram should be given to Hindus and a separate site be given to Muslims to construct their mosque. It should be noted that a Mughal Invader King Babar had demolished Hindu Temple in Ayodhya city in India and constructed a mosque with the remains of the temple. During the Modi Government rule the matter was pursued and the Supreme Court gave its judgement. Modi Government also abolished the Muslim practice of Tripple Talaq that was discriminatory and against the Interests of Muslim women.

Another Major Work done by Modi Government was to give Indian Citizenship to persecuted religious minorities of Hindus, Christians, Buddhists, Jains, Sikhs, Parasis in 3 Islamic Nations of Pakistan, Bangladesh and Afghanistan. Next few major issues in pipeline are Universal Civil Code which means same law applies to all Indians irrespective of the religion which will do away with the special laws for Muslims. Another big law in pipeline is on Population control.

All the above are seen by the Jihadists as Anti-Muslim Laws whereas Hindus see a ray of hope in Indian Prime Minister Narendra Modi. However taking the advantage of this hatred in Jihadists against Indian Prime Minister Narendra Modi, Pakistan as well as Indian Leftist Liberals and the Democrats in the US have all joined hands to create such events in India that will malign the reputation of the US President Donald Trump and that would impact the Elections of 2020.

If Narendra Modi Government acts with an Iron hand against these Jihadists during Trump Visit, it will incite all the Muslims and they will come on streets and will destroy the Public Property as was seen during the anti Citizenship Amendment Act(CAA) 2019 protests.

The Leftist Liberals and Muslim Leaders and the Sham Journalists who had been inciting Muslims since the Citizenship Amendment Act 2019 should have been identified by now by Indian Government. What is stopping Indian Government to go all out and arrest all those Leftist/Liberal/ Jihadists leaders that had been spreading hate and inciting people for violence?

Are the US and India facing the same issues from the Leftist Liberals and regressive left that is using Jihadists as pawns for their Political gimmicks? Will the Muslims continue to be used as pawns? India was already Partitioned in 1947 on the basis of religion and lost present day Pakistan and Bangladesh. What do these Jihadists want today? Another Partition of India? Where? Does that make the partition of 1947 on the basis of religion null and void? Should Pakistan and Bangladesh be merged with India back and again the Partition of India be done and make sure each and every Muslim all over the India are sent to these regions? Well that is not possible. Will Muslims understand that they need to continue to live with other religions and not get incited by these Leftist Liberals and Jihadists Leaders who talk of Invading the whole Indian and establish Jihadists Rule? Hence should they do anything stupid during the US President Donald Trump Visit to India?