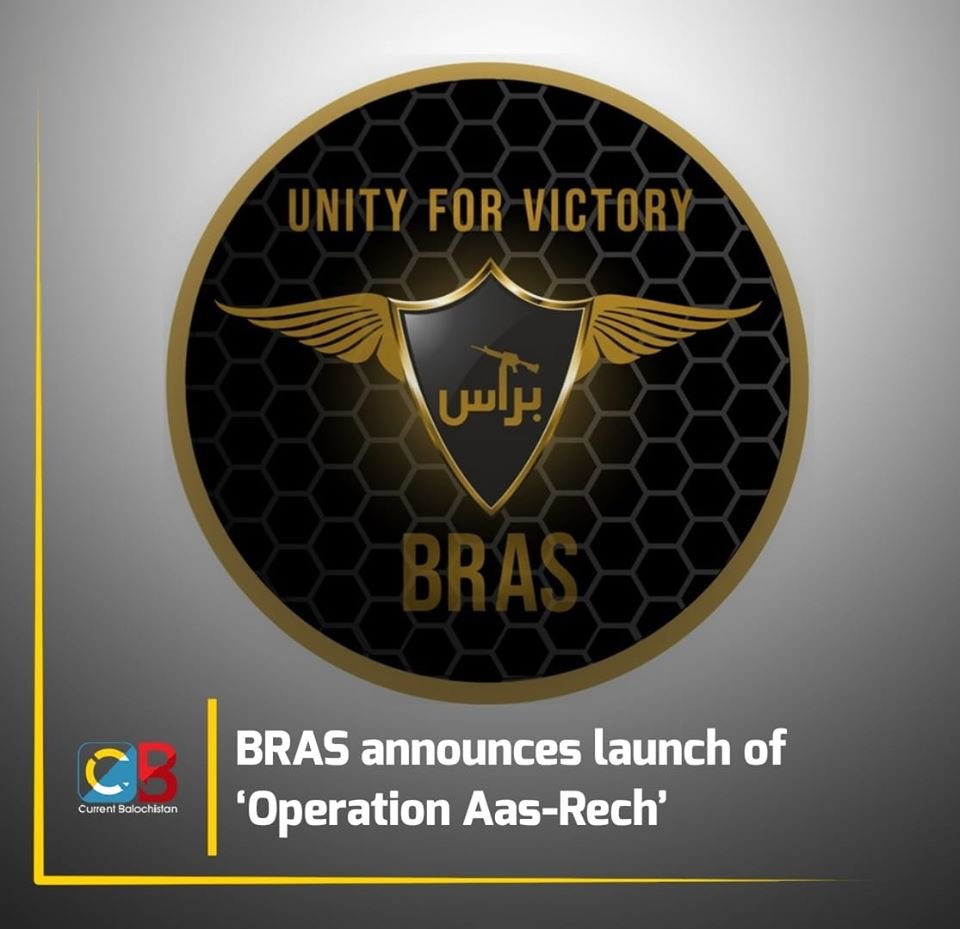 With declaration of “Operation Ass-Reach” by Baloch Raji Ajoi Sangar (BRAS), which is a group of Baloch Freedom Fighters, to eliminate terrorists of Lashkar-e-Taiba (LeT), a UN designated terror outfit, working under Pakistan army, US State Department has listed Pakistan as NO-GO zone for US citizens.

He expressed his views in this regard that during the past two days, two clashes have occurred between Baloch armed freedom fighters with other armed groups operating in Balochistan during which casualties from both sides have taken place.

The BRA leader further said that the proxies of Pakistan are directly fighting against the Baloch libertarian. Lashkar-e-Taiba is responsible for the martyrdom of Baloch fighters in Zamuran; Baloch Liberation organizations should take strong action and stand against Lashkar-e-Taiba.

Two days ago, five people were killed in a clash between Baloch freedom fighters and armed men in Nag area of ​​Buleda, while the spokesman of the Baloch Armed Forces Alliance (BRAS), told media, In the statement, “BRAS fighters encountered with activists of the Lashkar-e-Taiba, a religious extremist group and local so-called Death Squad, led by the Pakistani army. The clash continued for hours as several enemy personnel were killed while five of our fighters were martyred”.

While yesterday in an attack in Zamuran area of ​​Kech, killed two people, who were identified as Nawaaz S/o Sayad and Asghar S/o Majeed residents of Pullabad, Tump.

Following is the text of the Official Press Release issued by BRAS:-

The Spokesperson of the organization, Baloch Khan said in the statement “BRAS fighters attacked the activists of Lashkar-e-Taiba, a religious extremist organization under the patronage of Pakistan Army in Zamuran. The attack resulted in killing of 2 and injuring several other members of the organization. Their weapons and motorcycles were confiscated as well.

Baloch Khan added that the Baloch fighters attacked the Lashkar-e-Taiba terrorists at Kulbar Shahab Dikk Jah area when they were on their way to Tump. Two of the terrorists killed in the attack were identified as Nawaz s/o Saeed and Asghar s/o Majeed, residents of n Pul-Abad Tump.

The spokesman further said that, both Nawaz and Asghar were directly involved in the attack on our comrades on Thursday. Yesterday, the religious terrorist organization Lashkar-e-Taiba, a so-called death squad of government-sponsored criminals and the Pakistani military jointly tried to surround our fighters. But Baloch Sarmachars (Freedom Fighters) bravely managed to break the siege, while in the battle, five of our soldiers were martyred. We want to clarify that all the terrorists of Lashkar-e-Taiba and members of the so-called death squad have been identified and such elements will no longer get dispensation of being Baloch or citizens of Balochistan.

The spokesman stated that, for the purpose of eliminating all these enemy elements, under a comprehensive strategy, BRAS announces the launch of a large-scale operation called “Operation Aas-Rech”.

Baloch Khan added, “We want to convey this message to Baloch people that they must keep distance from terrorists of L-e-T and local death squads to avoid any kind of loss. We also want to convey a message to the families of these activists that if they are not the partners in crime with them then they should also stay away from them in public places, so that they can avoid becoming innocent victims.”

As per sources, FATF Grey Listed Pakistan is under tremendous international pressure from International community to end the Terrorist Infrastructure and remove the Terrorist bases from Near the Indian Border. As a workaround, Pakistan has moved some of those bases to Balochistan.

As per the source, “We will now allow our land of Balochistan to be used by Terrorist Pakistan Army to be used as training ground to Dehshatgards (Terrorists) who kill non-muslims on religious grounds. We are ready to cooperate with US and allies to eliminate UN Designated Terrorists from Balochistan.”

As per the source, “We request US and Afghanistan Government to provide us all the help to defeat the nefarious designs and end the terrorist producing factory of Pakistan Army in return of Freedom of Balochistan from the Occupying forces of Pakistan.”

The main objective behind the formation of BRAS is ‘unification and consolidation of the national strength is the only way forward to get rid of Pakistani occupation of Balochistan.’ The coalition came into existence to launch coordinated attacks against Pakistani military, Chinese interests in Balochistan and CPEC sites.

In an another statement on Jan 31, 2020 regarding another encounter between Balochistan Freedom Fighters and UN Designated Terror Organization Lashka-e-Taiba, The spokesperson Baloch Khan said “Bras fighters encountered with activists of the Lashkar-e-Taiba, a religious extremist group and local so-called Death Squad, led by the Pakistani army. The clash continued for hours as several enemy personnel were killed while five of our comrades were martyred.

The spokesman added that BRAS fighters were on a routine patrol in Naag area of Buleda in Kech district, when religious extremist group Lashkar-e-Taiba and death squad group in a large number tried to surround Bras fighters. In hours-long battle, Lashkar-e-Taiba and the so-called Death Squad were directly supported by the Pakistani army. Bras Sarmachars (Freedom Fighters) succeeded in breaking the siege, killing many enemy personnel after a fierce battle. During the evacuation of all other companions, five of Bras’s men embraced martyrdom. The martyred were identified as Najid Baloch alias Saleem, Miran Baloch alias Dad Jan, Shakeel Baloch alias Jeeyand, Daulat Baloch alias Baran, Yousuf Baloch alias Doda.

Baloch Khan said that the fighters who were martyred, belonged to various organizations of Bras. Yousuf Kurd s/o Ilai-Bakhsh alias Doda belonged to Naal area of district Khuzdar. He started armed struggle for the independence of Balochistan on the platform of Balochistan Liberation Front in 2012, then two years later in 2014, he devoted his services to the Baloch Liberation Army. During the eight years he served on various fronts of Balochistan and was involved in many important organizational goals. He was a prominent member of the organization because of his professional military skills and intellectual maturity.

The other companion who held the status of martyrdom was Daulat Rasool s/o Abdul Rasool alias Baba Baran Jan, who belonged to Omri-Kahen Sami area of Turbat. In 2015, he joined armed struggle to achieve national independence through the Balochistan Liberation Front’s platform. He had been the commander of the urban network in Turbat for two years and since 2017 had been serving in the mountains on Shappuk, Sami, Hoshab and other fronts. He was not only a great fighter on mountainous front but also specialized in Urban Guerilla Warfare.

The third martyr is Miran Baloch s/o Sardar Ghani alias Dad Jan, from Zamran Zangi area of Kech district. He started the armed struggle on BLA’s platform in 2016, and later in 2018 he joined the BLF. He was a perfect guerrilla soldier based on his strong ideology of national independence.

Martyred Shakeel Baloch s/o Abdul Ghani alias Mama Junaid belonged to Gwadar district of Balochistan. He joined the Baloch Liberation Army in December 2017 and started armed struggle. He stood alongside his colleagues in many important battles and set the example of bravery.
Martyred Najid Baloch son of Dilmurad alias Saleem belonged to Jhao Kohro in Awaran. He was a young fellow and joined the Baloch Liberation Army in 2019. His strong ideology is an example for youngsters.

BRAS spokesman, Baloch Khan further said that the Pakistani army has formed a so-called death squad in Balochistan as well as all the criminals against the mobilization of the Baloch national independence. These criminal gangs obtain weapons and permits directly from the military, and as a compensation they have the freedom to commit any kind of crimes. According to a new plan of Pakistan Army and intelligence agencies, Lashkar-e-Taiba camps have been set up in mentioned areas of Balochistan. Funding and training are regularly received by the Pakistani Army. Religious extremists of such kind are not only a global threat but have also carried out numerous attacks on the Shi’ite community and Zikiris in Balochistan. Baloch fighters are the biggest obstacles to these global terrorist groups in Balochistan. Due to which, these religious extremists along with Pakistan Army and Death squads are active against Baloch fighters.

The spokesman added that BRAS reaffirms the commitment that the blood of Baloch sons will be revenged with the independence of Balochistan. Our war will continue not only with the occupying forces for an independent state but also with all the terrorist elements who want to make Balochistan a base for terrorism for their vile intentions.

In another attack by Balochistan Freedom Fighters, a 36-inch diameter main gas pipeline, supplying gas to Punjab from Sindh, blown up near Nawazabad in Sadiqabad on Tuesday 28-January 2020 night.

According to details, the gas pipeline caught fire after an explosion in Sadiqabad which has been controlled now. Two fields were completely burned by the fire and the pipeline was coming to Punjab from Sindh’s Qadirpur.

After the fire, the gas main valve was closed which had a pressure of 900 to 1000 Pounds per square inch (PSI) while the bomb disposal squad and police surrounded the area.

On the other hand Baloch armed outfit the Baloch Liberation Tigers claimed responsibility go the attack.

The BLT spokesman, Meeran Baloch released statement in the media from an undisclosed location and claimed responsibility for blowing up Gas pipeline.

Mr Baloch has said the such attacks will continue.

It should be noted that lakhs of Baloch civilians have been disappeared by Pakistan Army and either sold or killed for Organ Harvesting by Pakistan Army. There are no records of their arrests in any Police Station or in any Government records. We had published that information in our previous articles:-

We have also published several articles in past on Gross Human Rights Abuses by Pakistan Army in Balochistan.

The US on Friday issued the highest level travel alert (Level 4: Do Not Travel) for the provinces of Balochistan and Khyber Pakhtunkhwa, advising its citizens to reconsider visiting Pakistan due to active separtist movement, sectarian conflicts.

Balochistan Province – Level 4: Do Not Travel

Do not travel to Balochistan province. Active terrorist groups, an active separatist movement, sectarian conflicts, and deadly terrorist attacks against civilians, government offices, and security forces destabilize the province, including all major cities. In 2019, several bombings occurred in Balochistan province that resulted in injuries and deaths.

KPK Province, including the former FATA – Level 4: Do Not Travel

Do not travel to KPK province, which includes the former FATA. Active terrorist and insurgent groups routinely conduct attacks against civilians, non-governmental organizations (NGOs), government offices, and security forces. These groups historically have not discriminated between government officials and civilians. Assassination and kidnapping attempts are common, including the targeting of polio eradication teams.

As per our sources, “Pakistan has always eyewashed the West and FATF with moving its Terrorist Training camps from one province to another. This time Pakistan Army has shifted these Terrorist Training Camps to Balochistan. These UN Designated Lashkare-e-Taiba Terrorists besides being trained are given active duties to join the local death squads and go in Mountains of Balochistan and Kill Balochistan Freedom Fighters. Besides that they are also responsible for burning hundreds of Baloch Villages rendering thousands of Baloch civilians homeless in the cold winters.