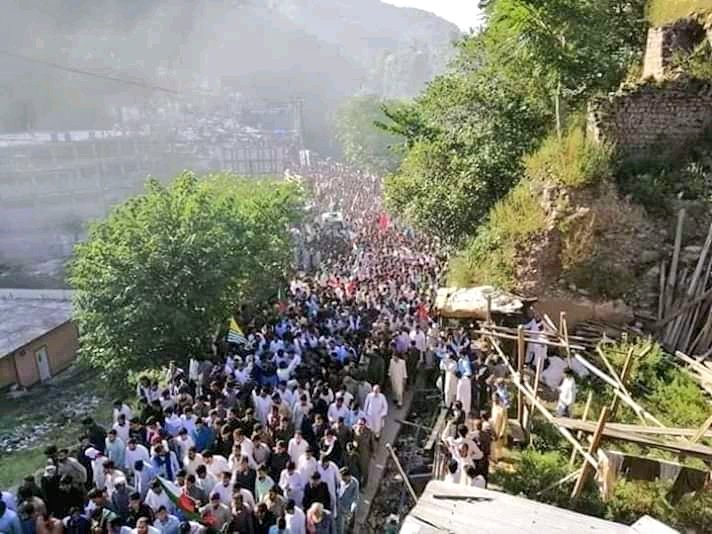 115 years later, we are again seeing the same tactic as a war strategy. What if you send innocent people into the line of fire? How will your enemy respond to?

Pakistan understood that it has lost the war with India. The amount of war rhetoric and the reluctance of Pakistani Army to invade India and correct the “Indian mistakes” over Kashmir is a clear indicator of that. Low on ammunition and fuel and taking heavy casualties, one would expect any country in the world to call quits. But not Pakistan. This is inspite of poeple coming in open to protest against Pakistani Army over Kashmir.

Pakistan is in an unenviable position – all history and especially from the time of Zia-ul-Haq, it has made war rhetoric and Kashmir it’s mainstay. It is already well established that Kashmir is more of a business for the army and for the terrorist industry built around it. The numbers are more than enough to tell it’s importance to Pakistan.

A 2018 report by Forbes mentions that Lashkar-e-Toiba itself has an annual income to the tune of $100 million, clearly indicating that the terrorism industry on Kashmir itself is to the tune of hundreds of millions of USD, if not a billion or two, a number not trivial for Pakistani Economy. Compare this with Pakistan’s defence budget, $7 Billion

Now, Pakistan is stuck – it can’t back down in the face of massive retaliation as it will close this industry and it will destroy the pre-eminence of Pakistani Army in the narrative. In fact, after the defeat of Soviet forces in Afghanistan, business interests apart, Pakistan Army’s main stay of relevance is an unstable Afghanistan and Kashmir.

Terror attack at Pulwama in Indian province of Jammu and Kashmir by Pakistan based terrorist organizations changed the equation massively. In two words, Pakistan didn’t expect that level of a retaliation in India. After all, when Pakistan went scot free after attacking Indian Parliament and Mumbai, India’s financial nerve centre, why would it expect India to take seriously, the death of few more of it’s soldiers? But India took it seriously and it was a case of continuous high alert on the Indo-Pak border with regular flare up, slowly taking it’s toll on Pakistan’s military-terror apparatus.

Even then, Pakistan can’t go back. It needs to show to it’s people that it defeated India. If it didn’t do that, it’s end of the gravy train for it. In fact, a prominent Pakistani analyst clearly spelt out the problem – the problem is not Pakistan winning or losing the war, it’s about making Pakistan believing it won the war against India. And it looks like Pakistan is floundering even in that aspect.

This establishes that India’s removal of special status for the province of Jammu and Kashmir is nothing more than another excuse for Pakistan to keep the situation volatile. And that explains why Pakistan is bent on internationalizing Kashmir even at the expense of it’s image and global dignity.

And the carnage on the border doesn’t stop. Now, there is news that in face of the massive retaliation, forget army, even the terrorists are refusing to cross the border.

And as they say, desperate times call for desperate measures. Pakistan has done one of the worst things, which will make people remember it with horror all history – the use of human shields in war. News is pouring out that Pakistan is unleashing innocent civilians on Indian border, who are being mowed down by Indian troops. Clearly, India can never assert how many of them are innocent civilians or how many of them are terrorists and Pakistani SSG who are using this window to cross into India. But, the question lies, how long can India shoot them down?

We covered about SSG and BAT commandos in our previous article Whenever Pakistan Economy In Shambles, Kashmir Heats Up : Kashmir Updates

In fact, this is not the first time Pakistan tried to unleash civilians on the border. And it’s not spontaneous. It’s also a well built strategy to create a humanitarian crisis to pin the blame on India.

There were a few aborted attempts, one by lawyers of Muzaffarabad and others which increased the rhetoric of marching into India to take Kashmir.

The next phase was bringing in prominent Pakistanis, like Javed Miandad, the great Pakistani cricketer, who incidentally is a close relative of the kingpin of Mumbai underworld Dawood Ibrahim, the expatriate boxer Aamir Khan, who by his acts, showed more loyalty to Pakistan than to the country of his citizenship, Britain and others.

Next was a guided tour by DG ISPR of Pakistan in Pakistan Occupied Kashmir territories. This portrayed a general picture of calm and peace in the area.

The stage is set. When ordinary people can reach the front end, why not everyone? Let’s use the opportunity to breach the border and take Pakistan. But, the locals know the reality.

Suddenly, we see a march on the border, orchestrated by the Army – the intent was to show to Pakistan and the world that peaceful Kashmiris are marching on Indian border, braving Indian excesses. The first breach was effected in Khoiratta area. Indian warning shots scared the people off. But, news leaked that this is stage-managed by the army, the one thing Pakistan dreaded and Pakistan can’t continue the charade any more. That besides, the first incident happening with no serious casualties created a serious problem.

The second day was a flood. The world knows Pakistan is pushing innocent and not-so-innocent people as the border – some as human shields and some using the human shields to spread chaos and can’t afford the loss of face. The day turned out to be a disaster, with gullible people trying to march on the border, police trying to stop them and those who breached through, facing Indian fire and when attempting to retreat, Pakistani fire.

This has led to a situation where Pakistan saw double digit deaths and injuries, with every major hospital full with the dead and dying. The situation in Poonch river near Kotli is even more desperate – people trying to wade through the water but being stopped by Pakistani forces. There is news of Pakistani police injured and it’s a matter of time there are going to be general desertions to stop the carnage. The Chumik Shenko moment which Pakistan is planning for India is slowly becoming one for Pakistan.

It’s a matter of time a massive humanitarian disaster unfolds. The country has no medicines and has decided to ask India to export some medicines. Would you expect India to send medicines to facilitate Pakistan implement such quixotic ideas again and again? With mounting casualties and with Pakistan doing everything to provoke India, how long can this charade go?

Now the primary question lies. How low can Pakistan go to prove a point? What should be done by the world so that it doesn’t destroy global peace in it’s foolish quest for Kashmir?